Turkey’s security crackdown in the Kurdish-majority southeast could spill over to the country’s west and eventually become a civil war, warns Kurdish politician Kamuran Yuksek in an interview with Al-Monitor. 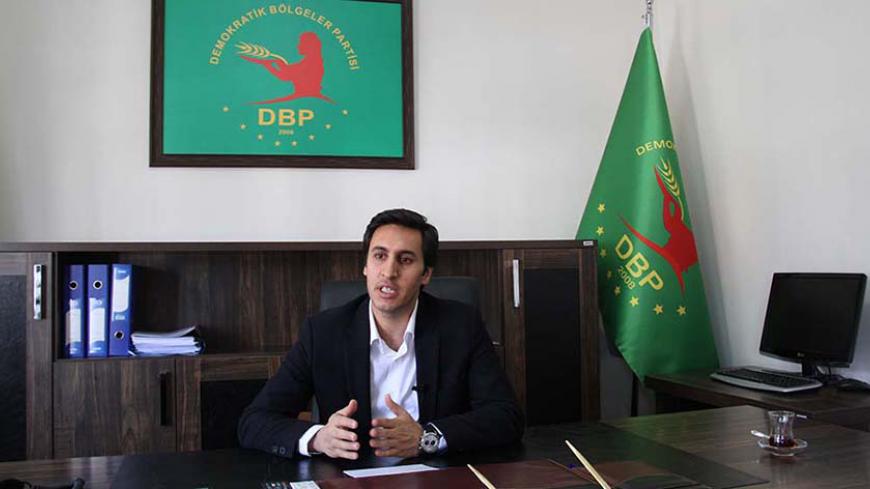 Kamuran Yuksek, the co-chair of the Democratic Regions Party, speaks during an interview with Al-Monitor in Diyarbakir, Turkey, Jan. 12, 2016. - Mahmut Bozarslan

DIYARBAKIR, Turkey — Turkey’s ongoing security operations in the Kurdish-majority southeast are aimed at crushing Kurdish demands for self-rule and the grounds for any democratic discussion on the issue, the co-chair of the Democratic Regions Party (DBP) said in an interview with Al-Monitor.

Kamuran Yuksek argued that the entrenchment of armed Kurdish militants behind ditches and barricades in residential neighborhoods was a “reaction” to Ankara’s policies rather than a cause of the current clashes. He warned the conflict could grow into a civil war.

Yuksek studied electronic communications at Ankara University from 1997 to 2000, but dropped out to join the Kurdish political movement. In 2009, he was arrested in a massive crackdown on Kurdish activists accused of collaborating with the outlawed Kurdistan Workers Party (PKK), and served five years in prison. After his release, he was elected co-chair of the DBP, the second pro-Kurdish party after the Peoples’ Democratic Party (HDP). More than 100 Kurdish mayors in the southeast belong to the DBP, whose main objective is to steer political preparations for eventual self-rule in the region.

The text of the Jan. 12 interview follows:

Al-Monitor:  What does the DBP’s autonomy demand entail?

Yuksek:  The HDP, too, has the issue of autonomy on its program but we are the ones who are working more actively on the issue. There is almost no democracy in the world today without some kind of a decentralized governance model like autonomy, self-rule, federation or federal states. In all countries with an advanced level of democracy, power has been decentralized, and this is how economic and social problems have been resolved. We are asking for decentralization of power and the creation of local governance models. We call this “democratic self-rule” and envisage the creation of [self-governed] regions.

Al-Monitor:  Have you mustered enough public support for that?

Yuksek:  The Justice and Development Party (AKP) has greatly criminalized the issue, preventing it from being discussed as a political project. It has portrayed it as a terrorist activity and shifted the problem to a confrontational ground to prevent the emergence of sufficient public support. We are faced with a government that portrays anyone supporting local democracy as a traitor and immediately launches judicial processes against them.

Al-Monitor:  How did the issue of self-rule transform into a problem of clashes in the trenches?

Yuksek:  This is a problem created by the government. Our party has been closely following the issue from the very beginning. The self-rule demands were not raised after the trenches or the clashes. The popular neighborhood councils created had begun advocating transition to an autonomous model. They said the central authority could no longer be accepted in its current form and that power should be transferred to local administrations. The government reacted very harshly, launching a campaign of oppression. Violence was heavily used against those who resisted. That’s how the problem started. Then the government moved quickly to portray the problem as a problem of terrorism and Turkey’s partition. This was meant to delegitimize the self-rule demands and portray them as terrorist demands to the public in Turkey. I can say that people were unlikely to resort to violent means if the government had not reacted that harshly. The government worried that the project would garner popular support and shifted the problem to a confrontational one.

Al-Monitor:  Why would the government do that?

Yuksek:  The [settlement] process was impaired with attitudes that President [Recep Tayyip] Erdogan and the government adopted after the Feb. 28, 2015, agreement on a road map for settlement. Self-rule, local democracy, all those issues were off the table. The government resorted to policies aimed at preventing the Kurds — both in Syria and Turkey — from acquiring any status. It chose the confrontational approach because it wanted to bury the issue. A decision of war on the Kurds was made at the National Security Council’s meeting on Oct. 30, 2014. They began making up pretexts to shelve the settlement process, and eventually succeeded. Their project envisages a presidential system, seeking to shift local powers into the hands of a single person in the center. The AKP is seeking to centralize all power, while our project is just the opposite. So this is a clash between the presidential system and the self-rule model.

Al-Monitor:  Do you believe self-rule could be achieved by digging trenches?

Yuksek:  No, this is not the way to achieve self-rule and resolve problems. Yet one could understand the trenches in the context of a cause-and-effect relationship. I mean, for years, everybody tended to accuse the Kurds of quarreling. But when you go to the origin of the problem, you see that the Kurds have faced denial ever since the creation of the republic [in 1923], and that their identity and rights have not been recognized. Certain Kurds have risen up against this. You cannot resolve the problem if you only see its results but not its causes. So, the trenches today are a result of the government’s rejection of the Kurdish demand for self-rule, an outcome of the problem. The trenches or the barricades is a form of defense that is seen as a reaction. One has to ask, why are the trenches there? Why have people suddenly resorted to trenches? As you know, the president recently said there is no Kurdish problem. So there is a state of denial. The means of democratic discussion have been ruled out. When we bring the issue up as a party, they take us to court. They want to lift the parliamentary immunity of [HDP] deputies. What for? Because they advocate democratic self-rule. Because there is no democratic discussion, the issue remains on the agenda in the context of trenches and barricades.

Al-Monitor:  Some say the PKK resorted to this method in order to keep Turkey busy, away from meddling in Syria. What would you say on that?

Al-Monitor:  Where do you think the current clashes could lead?

Yuksek:  If the government refuses to change its policies and continues like this, the country could descend into a civil war. We are already in such a situation, more or less. A part of Diyarbakir’s population has been unable to go out for 41 days because of curfews, besieged by tens of thousands of soldiers and police. The people are unable to meet their basic needs. What are we supposed to call this? Tanks have moved to streets in cities. If this goes on like this, the country could be gradually dragged into a civil war. The responsibility lies with the AKP government.

Al-Monitor:  Do you think the conflict could spill over to western Turkey?

Yuksek:  Unfortunately, I do. The Kurds are being killed in the streets and they feel humiliated. The number of civilian deaths has reached 230, all killed by the army or the police. This has been greatly disturbing the Kurds in western Turkey, and the accumulation of anger could soon explode.

Al-Monitor:  How could this trend be stopped?

Yuksek:  We don’t want the problem to grow into a civil war, we want a settlement through democratic means. What we are asking for is not something impossible for Turkey. We want that universal norms of democracy be implemented here as well.

Al-Monitor:  What should be done to stop the clashes in the immediate term?

Yuksek:  We think that international and domestic public pressure are necessary. The government has rejected everything we have proposed to end the clashes. As a first step, curfews should be lifted. This could create an atmosphere to sit down and talk. The government, however, is currently far from such a move because there is no pressure on it. It has legitimized the situation, portraying its war as a struggle against terrorism.

Al-Monitor:  You went to Russia in December as part of a Kurdish delegation. Did you discuss this issue there as well?

Yuksek:  Turkey’s internal problems were not part of the discussions there. But Russia is following the developments. We made no request to Russia to put pressure on Turkey. The expectations we expressed vis-a-vis Russia were along the following lines: Russia is an influential power in the region, especially in Syria, and the Kurds want to live in freedom in their homelands in this region. So, the Russians, too, need to refresh their point of view on the issue and acknowledge the status of the Kurds. We made no request concerning specifically the Kurds in Turkey. We are watching the Russia-China-Iran bloc, but we have no intention to be part of this bloc or to seek the settlement of problems via this bloc.