Remarks by Turkish Prime Minister Ahmet Davutoglu that US President Barack Obama is coming around to Ankara’s position on Syria are not supported by statements from Washington. 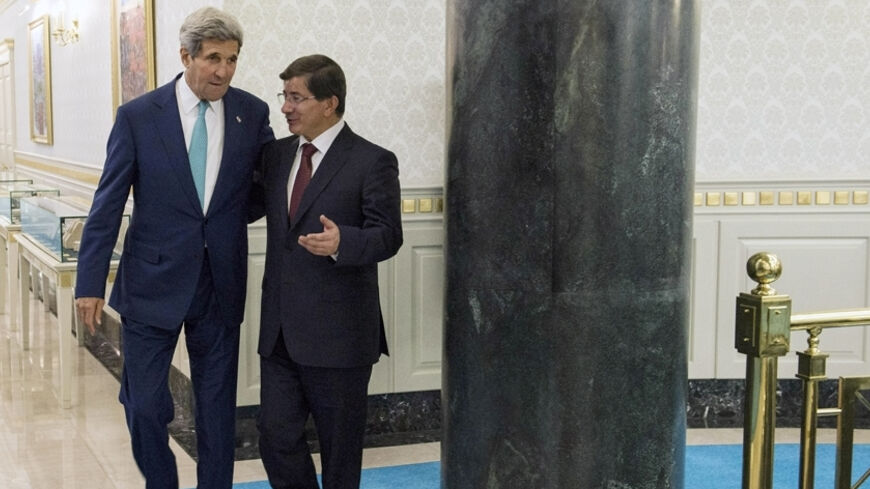 The Syrian crisis has turned into the bane of Turkish Prime Minister Ahmet Davutoglu’s life, defying all his predictions and plans for the region. In August 2012, when he was still foreign minister, he confidently announced during a television interview that Syrian President Bashar al-Assad had only a few months to go, if not weeks. That prediction turned out to be woefully wrong, of course.

Davutoglu is maintaining that he received strong signals from President Barack Obama indicating that Washington was preparing to change tack on Syria, and to line up with Ankara’s position by making the Assad regime the priority target, while relegating the fight against the Islamic State (IS) to a secondary position.

Statements from the highest echelons of the US administration, including from Obama, however, appear to contradict Davutoglu, raising serious questions once again about his ability to read international situations of grave importance to Turkey.

After meeting with Obama on Nov. 15 on the sidelines of the G-20 summit in Brisbane, Davutoglu told senior Turkish editors and journalists that Ankara and Washington did not have substantial differences over Syria, but only differences in term of “synchronization” and “timing.”

Turkey has been trying desperately to convince Washington and its other Western allies, albeit with little success, that getting rid of Assad should be the main priority in Syria, and that the problem with IS would more or less work itself out automatically once this was achieved. Many diplomats and experts consider that to be a politically naive stance at this stage.

Davutoglu said Washington’s reluctance not to intervene against Assad was understandable, given the example of Iraq, even though it too wanted to see the end of the Syrian regime. He maintained, however, that the Obama administration realized that Assad was “exploiting” the US-led fight against IS.

Pointing to the gains being made by the Syrian regime in Aleppo, Davutoglu also criticized the focus by Washington on the fight against IS in Kobani. He said the “focus on the big picture in Syria” had been lost because of the concentration on Kobani.

Asked if a radical transformation is in the works in terms of the US stance on Syria, Davutoglu responded by declaring: “Wallahi [by Allah], there are stronger signals to this effect.” He nevertheless likened the US system to an ocean liner and said it takes time for it to change course. “But when you meet the US president face to face, you sense that the direction of the person steering this liner has changed,” Davutoglu said.

Davutoglu’s meeting with Obama, and his remarks following this, came two days after CNN reported that Washington had realized that defeating IS might not be possible without removing Assad, and was therefore reviewing its Syria policy.

This report undoubtedly also encouraged Davutoglu in his belief that the Obama administration was finally coming around to accepting Turkey’s position on Syria. Statements from Washington concerning the CNN report, however, have put a damper on Davutoglu’s enthusiasm.

Obama also denied that there was a change of policy on Syria in the making. "Certainly no changes have taken place with respect to our attitude toward Assad," he told reporters in Brisbane a day after his meeting with Davutoglu.

There is also a body of opinion in Washington that falls contrary to the line that Davutoglu is pushing because it indicates that a regime change strategy in Syria at this stage will only strengthen IS.

Expert opinion in Ankara, on the other hand, also indicates that it is unrealistic to expect a change in strategy by Washington at this point. Retired Ambassador Ozdem Sanberk, who heads USAK, the Ankara-based International Strategic Research Organization, is among those who considers a change in Washington’s current position to be unlikely.

“What I am looking at instead is the possibility there is for Turkey to change its strategy,” Sanberk told Al-Monitor. Asked why Davutoglu insisted on pursuing a policy that has not produced any results for Turkey, while its allies remain focused on IS, Sanberk said, somewhat diplomatically, that he had no answer to this question.

Asked if this might have more to do with domestic politics than foreign policy, given Davutoglu’s need to appear consistent in the eyes of his constituents at home, Sanberk acknowledged that this could be one reason.

“Once you have burned your bridges, returning can be difficult,” Sanberk said, clearly referring to both President Recep Tayyip Erdogan and Davutoglu having not flinched in their enmity toward Assad, and the need to get rid of him as the main priority in Syria.

Sanberk suggested that a way out of this dilemma for Turkey might rest in a third Geneva conference on Syria where the Assad regime was also represented. “If a formula is negotiated and agreed on in Geneva whereby Assad goes but his regime stays, this might provide a way out for Turkey,” Sanberk said.

This suggestion appears to be in line with Moscow’s position, but remains anathema to both Erdogan and Davutoglu, who feel Assad and his regime have lost all legitimacy and should be kept away from the negotiating table at all costs.

Sanberk also added his view that the Obama administration does not appear to have a coherent strategy for the Middle East either, and is approaching matters in a piecemeal manner, according to developments as they crop up. “America also needs to come up with new ideas to be able to craft a new agenda for the region,” he said.

Burhanettin Duran, the general coordinator of SETA, the Ankara-based Foundation for Political, Economic and Social Research, which is close to the ruling Justice and Development Party (AKP), is another regional expert who does not expect a radical change in the current US strategy on Syria, even if the Obama administration is searching for new options.

“It looks like Obama is going to come under pressure on Syria after having lost both wings of the Congress in the midterm elections. He is also aware that he has to change his strategy on IS. The most important thing, however, is that this has started to be debated. … But I don’t expect a fast and radical change anytime soon,” Duran said during an interview with the state channel TRT1.

Davutoglu also acknowledges, of course, that Washington will not change its position overnight. Yet, time is of the essence for him, given the advances by the Assad regime in Aleppo. But he is unable to alter the course of events in Syria to suit his government’s needs. Neither is he prepared, however, to look at Ankara’s own Syria policy in a new light.

Given his remarks in Brisbane, one is therefore left to wonder if Davutoglu — who has been serially wrong on Syria — is engaged in wishful thinking rather than in trying to assess the situation as it really stands. He should know by now, however, that wishful thinking has produced no results for Turkey in a Middle East that is proving to be a far more complex region than he ever imagined it to be.