The Syrian Democratic Forces claim Turkey caused a drop in the Euphrates River water level that will harm residents and their economic activities in the areas they control in northern and eastern Syria. 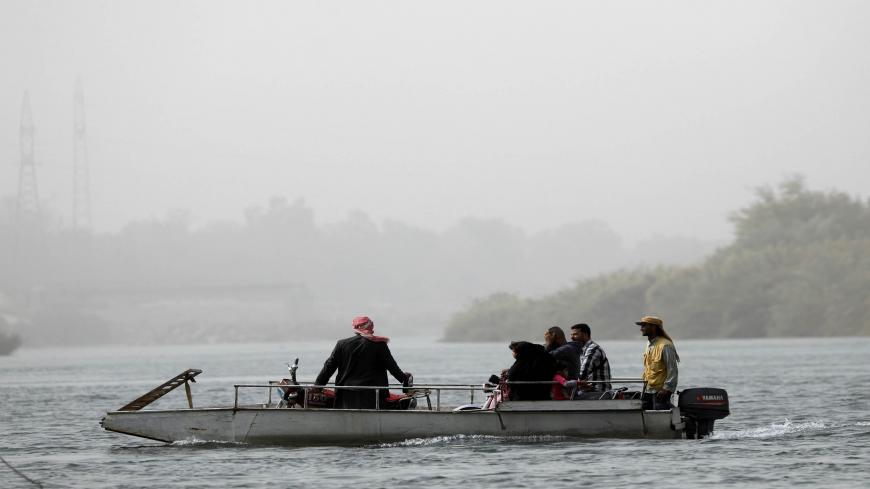 Syrians cross the Euphrates River from the city of Raqqa to the countryside villages south of the city on ferries due to the destruction of the bridge connecting the two areas, Syria, Oct. 15, 2018. - Delil Souleiman/AFP via Getty Images

ALEPPO — The water level of the Euphrates River in Syria’s northern province of Raqqa has decreased dramatically over the past few weeks. Should the river's water flow continue as it is now, economic activities — and particularly agriculture — in Raqqa and other Syrian areas that the river crosses through will be harmed.

On March 2, the General Administration of Dams in Northeast Syria, affiliated with the Kurdish-led Autonomous Administration of North and East Syria, issued a statement accusing Turkey of cutting water sources that flow into the Euphrates. “Since the end of January the average water flow quantity became less than a quarter of the quantity agreed upon according to the agreement signed between the upstream and the downstream countries that share the riverbed. This is a very low quantity that does not meet the operating and investment requirements for such a period of the year.”

It continued, “The aforementioned has coincided with the onset of the irrigation season where the quantities of water consumed to meet irrigation needs reach a peak. This also contributed to another decrease in the levels of the three dam lakes. On Feb. 27, the level of Tishrin [Dam’s] lake reached 320.7 cubic meters, and the level of the Euphrates [Dam’s] lake reached 301.7 cubic meters. These quantities [are very low] compared to the same period in previous years.”

On March 4, the deputy of the co-president of the Local Administration Committee and Environment Committee in the Autonomous Administration, Hevin Sheikho, warned of an exacerbation of the living crisis and of environmental disasters in the areas of northeastern Syria if Turkey continues to reduce the water level of the Euphrates River.

In her statement carried by Hawar News close to the Syrian Democratic Forces (SDF), Sheikho added, “Turkey is using water as a pressure card against the Autonomous Administration areas.”

Turkey, for its part, did not comment on the Kurdish accusations.

Yet some question Ankara's role in the decrease, given the periodic drops in water level and the ongoing rivalry between the Kurdish administration and Turkey. An employee working at the Euphrates Dam in Raqqa told Al-Monitor on condition of anonymity, “This is not the first time that the water level of the Euphrates River has decreased. This has happened repeatedly during the past years, even in the years before the Syrian revolution. The reasons and factors behind the water level drop vary. Sometimes Turkey would reduce the flow quantity for a temporary period in order to fill its own dams. At other times, quantities drop due to the lack of rain and snow.”

The source claimed the SDF is trying to exploit this issue to disparage Turkey. “The SDF’s talk about the negative effects that the decrease in the river water level will have on the various economic sectors is exaggerated. The reality is different. The river’s water level drops for a few weeks every year and then goes back to its natural flow and rate. This does not significantly affect agriculture, fishing and other vital and environmental sectors, as the Autonomous Administration claims.”

The Kurdish-led administration has previously accused Turkey and its rebel allies of cutting off service at the Alok pumping station in Ras al-Ain multiple times.

The Euphrates River is the longest river in Southwest Asia with a total length of 2,800 kilometers (1,740 miles), thus its importance to Turkey, Syria and Iraq. But the river has been suffering recent periodic water level drops. The SDF blames the Turkish government for the drops, but these accusations have yet to be proven.

Yahya al-Sayed Omar, a political economy researcher, told Al-Monitor, “In the past the Euphrates River was at the heart of political tensions between Turkey, Syria and Iraq. Water rights between the three countries were regulated 1987, according to an agreement in which Turkey pledged that Syria would receive a minimum of 500 cubic meters per second. But in recent years, Syria's share of water has plummeted.”

Omar said, “The SDF claims the Turkish government is deliberately lowering the Euphrates water level in order to pressure it politically. It also claims that the Euphrates incoming water flow is not exceeding 200 cubic meters, which has economic and humanitarian consequences on civilians in its areas of control. Such consequences also affect the SDF as a de facto government, given that its areas depend on agriculture to a large extent.”

Omar believes only an impartial party needs to assess how much the water level has dropped.

“Several reports, some of them official, indicated that Turkey is having the worst rainy season in decades. Some Turkish states have witnessed the worst drought in a hundred years. One may say that the water situation in Turkey is not in its best condition. The Istanbul Water and Sewerage Administration stated that water levels in the city dams dropped by 24%. Although the capital [Istanbul] is far from the Euphrates sources, this rate reflects the current water and rain situation in Turkey, showing that it is also suffering from water scarcity,” he added.

Omar believes the SDF is trying to politically exploit the issue of the Euphrates water level drop. “Instead of seeking to alleviate the severity of the crisis, the SDF is making it worse,” he said.