Egypt is cautious but optimistic on its water supply for the year, with strategies to address last year's drop in Nile River flow. 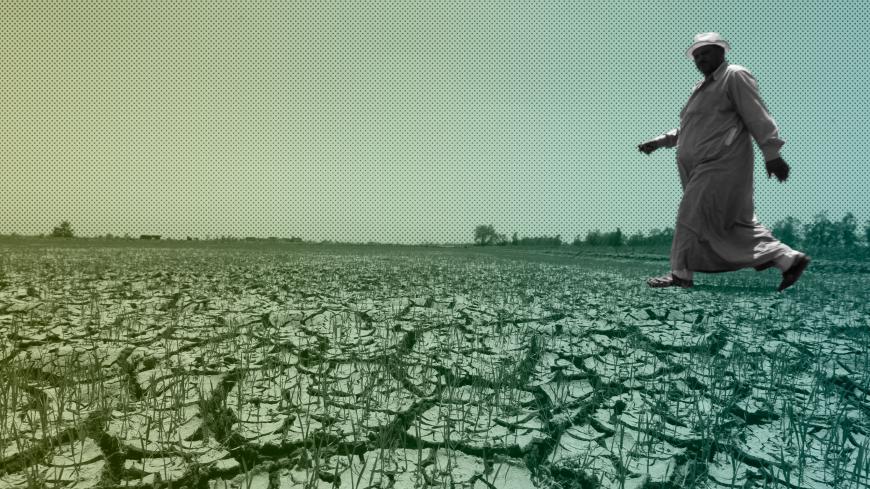 An Egyptian farmer walks past crops damaged by drought in a farm formerly irrigated by the Nile River, in el-Dakahlya, Egypt, June 4, 2013. - REUTERS/Mohamed Abd El Ghany

CAIRO — Though water-scarce Egypt is on the verge of flood season, Cairo has declared a state of emergency due to a decline in water flow from last year. Yet water experts say the country is in good enough shape because of its reserves and water conservation measures.

“The job of an irrigation engineer in Egypt has changed," Mohammed al-Sibai, spokesman for the Ministry of Water Resources and Irrigation, told Al-Monitor. "We no longer manage water flooding but manage water scarcity, and make precise plans to deal with it, so as not to harm the main interests and the citizens’ needs.”

The ministry reported July 27 that the total annual Nile River flow dropped 5 billion cubic meters (1.3 trillion gallons, or 6.5 billion cubic yards) from the year before due to decreased floodwaters from the Ethiopian plateau and equatorial lakes.

The government imposed a state of emergency in all governorates to regulate and manage water, especially to meet water needs for drinking and domestic use. "Egypt's annual water quota … will not be affected by the decline," Sibai said. “A state of emergency means keeping all of the Water Ministry’s departments on maximum alert to periodically follow up on the water situation in the main riverbed and all canals and water channels in the governorates."

Sibai said, “According to the ministry’s Nile Flood Forecasting Center's data on the amount of rainfall on the Ethiopian plateau [and equatorial lakes] during the current rainy season, flood rates are still moderate,” meaning there won't be any extra water to increase the storage level in the Aswan High Dam reservoir.

Floodwaters flow into the Nile and then into the man-made Lake Nasser reservoir, created by the Aswan High Dam in Aswan province. Some of the flow comes from rain in Ethiopia's hills. Another source is water that Sudan discharges from its dams to accommodate the new season's floodwater coming from the Ethiopian plateau.

Sibai said, “The water deficit will be fixed through water recycling projects, which provide 24 billion cubic meters of water. Egypt is now one of the top countries in terms of water-use efficiency, reaching a rate of 95%, according to international estimates." Egypt also imports food and industrial products that, if grown or made internally, would require 34 billion cubic meters of water.

Despite the water scarcity in Egypt, "the water year 2018-2019 has ended well," Sibai said. "The daily challenges and problems that farmers face were dealt with in a number of ways, as endorsed in the 2017-2037 Water Resources Plan between nine ministries." The plan addresses four areas: developing water resources, improving water quality, making water use more efficient while reducing the amount used, and community awareness.

According to experts in Egyptian water affairs, the decrease in the Nile River's flow from floodwater may not present a major danger at the present time, given Egypt's strategic water reserves in the Aswan Dam, in addition to the absence of serious climatic events such as the drought that hit the Nile basin in the 1980s.

Abbas Sharaqi, a water and geology professor at Cairo University, told Al-Monitor Egypt's current water scarcity is mainly due to its population growth, not the lower water flow from the Ethiopian plateau or equatorial lakes.

“The main rainy season in Ethiopia, which feeds the Nile, is in July, August and September, and the water reaches Egypt three weeks after the rainy season begins. The amount of floodwater can't be judged before the season ends in September," Sharaqi said.

"It's not possible to be in real danger, as long as there is a strategic water reservoir in the Aswan Dam, and official figures indicate that the water level there is so far within the safe limits," he said. “The most important challenge is to maintain safe [levels] of water in Lake Nasser.”

The decline in the Nile's water flow is a chronic but manageable challenge for the Egyptian government. Ethiopia had delayed filling the estimated 74 billion cubic meters of the Grand Ethiopian Renaissance Dam reservoir due to internal tensions. Prime Minister Hailemariam Desalegn resigned in February 2018; the dam project manager killed himself that July, according to authorities; and dam officials were arrested on corruption charges. Meanwhile, Cairo has yet to reach a clear agreement with Ethiopia to set common rules for filling the dam reservoir and avoiding any harm.

But last month, Egyptian Minister of Water Resources and Irrigation Mohamed Abdel Ati led an official delegation to Sudan and Ethiopia to discuss resuming negotiations and present Ethiopia with Egypt's vision of the rules for filling the Renaissance Dam.

Speaking about the effectiveness of such steps, Sibai said, “Leaderships in Egypt, Ethiopia and Sudan do not trust one another, and we recognize the parties' appreciation of how critical the situation is. The issue is being managed by virtue of agreements and treaties that guarantee no harm is done to any party.”