As drought continues to plague Ethiopia, the longstanding dispute over precious water resources in the Nile Basin is intensifying. 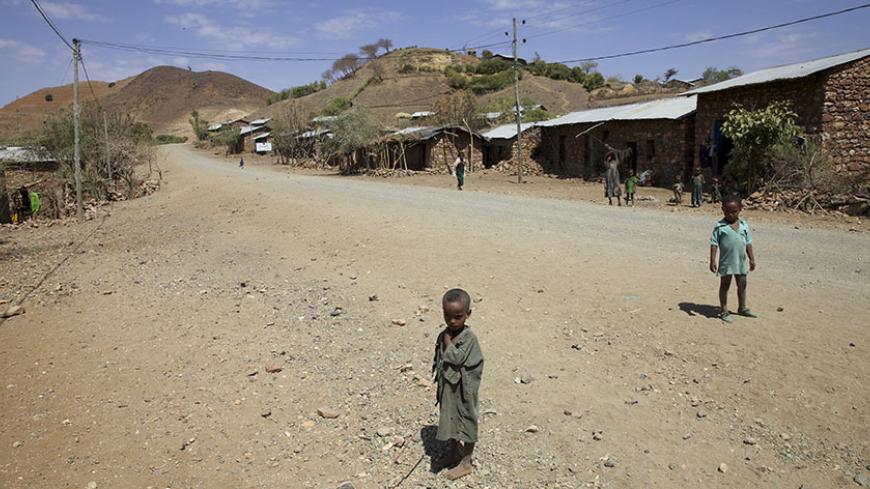 Children stand along the road in the drought-affected village of Tsemera in Ethiopia's northern Amhara region, Feb. 12, 2016. - REUTERS/Katy Migiro

Ethiopia’s northern regions have been plagued by one of the worst droughts to face the area in decades. During a visit to one of the worst hit areas earlier on Jan. 31, UN Secretary-General Ban Ki-moon warned that “the people of this beautiful country are facing their worst drought in 30 years.” On March 24, the United Nations, along with humanitarian partners, launched a three-month campaign to aid drought-affected regions and raise awareness of the ensuing food crisis. Now some are fearing this could exacerbate the longstanding conflict between Cairo and Addis Ababa over water resources.

The Ethiopian plateau, which is one of the main sources of the Nile River, has faced frequent droughts, the worst of which occurred in 1984 and led to a famine that killed around 1 million Ethiopians. Meanwhile, climate forecast studies and reports confirmed that such recurrent waves of drought have decreased the Blue Nile flooding by up to 20% during the past years, and that Ethiopia is among the countries most vulnerable to increasing rates of drought and lack of rainfall due to climate change.

Fekahmed Negash Nuru, executive director of the Eastern Nile Technical Regional Office (ENTRO) within the Nile Basin Initiative (NBI), told Al-Monitor, “Ethiopia is facing a very severe drought due to El Nino, and the areas most affected by this wave are located in the north, south, northeastern and southeastern parts of the country, where rainfall disappeared during the dry season and decreased during the wet season.”

The exploitation of the water resources of the Blue Nile, which is behind 85% of the Nile River flow, has topped the Ethiopian government’s political agenda since the inauguration of the Renaissance Dam project in April 2011. The project will retain the flow of 79 billion cubic meters of water and has consequently been behind the conflict with Egypt. According to the latter, this step affects the amount of water flowing to the country.

Amid the inability of the political and technical negotiations to reach solutions aimed at reducing the dam’s impact on the flow of water to the High Dam Lake, the drought issue hit the country and constituted yet another point that could either end up pushing the two countries toward further disagreement over the river resources or toward cooperation aimed at avoiding the drought impact and jointly managing the course of the river water through the ENTRO.

Nuru said, “The problems caused by drought, climate change and low rainfall will be alleviated in the event that the Ethiopian government increases its water storage. This can take place through the running of the hydraulic facilities infrastructure in the eastern Nile Basin.”

He added, “Sudan is currently working with Ethiopia through the NBI and the ENTRO on various strategies aimed at enhancing and increasing the stored water volumes as well as coordinating the running of the Nile dams.”

The Ethiopian government is dealing with the Renaissance Dam as a political challenge and using it as a way to maintain the state of popular mobilization that started in 2011 in order to complete the construction of the dam. Despite having repeatedly pledged not to harm Egyptian interests, Ethiopia is refusing to delay filling the dam's reservoir and is sticking to its construction schedule. Also, during the latest meeting held by the foreign and water ministers in Khartoum in December 2015, Egypt refused the water storage plan until studies about the dam's effects had been completed.

“The negotiations failed to reach an agreement about starting water storage in the dam, and no amounts of water will be retained without the completion of technical studies aimed at testing the effects of the dam, as is stipulated in the Declaration of Principles,” a diplomatic source in the Egyptian delegation taking part in the negotiations with Ethiopia and Sudan over the dam confirmed.

The source further told Al-Monitor, “Egypt's stance on the storage issue was very clear before the emergence of these serious indications, and it has not changed despite the drought.”

“Also, the report issued by the International Panel of Experts on the dam warned against retaining any amounts of water behind the dam during periods of drought,” the source added.

With the escalation of the problem of drought and the decreasing flow in the Blue Nile and its tributaries, a Ministry of Water Resources and Irrigation report reviewed by Al-Monitor said that the flow rate decline last year led to low water levels in Lake Nasser. According to the report, these water levels are expected to further decline over the coming months at a time when water is needed the most and larger amounts of water are needed from Lake Nasser amid ongoing prospects of flooding decline due to the drought in Ethiopia.

The report anticipates disruptions in the water levels of the Nile River and the main canals located within Egypt, which will adversely affect the running of drinking, irrigation and electricity stations due to low water levels in front of these stations. Meanwhile, higher water amounts aimed at dealing with these problems will affect Egypt’s strategic reserve in Lake Nasser.

In an interview with Al-Monitor, Regional Director of the World Meteorological Organization Hisham Abdul Ghani said, “The drought that began in 2015 and will continue until this rainy season in Ethiopia may be the worst in 50 years, but the available information and data are limited to the three months to come given the absence of long-term climate forecasts.”

He added, “According to the recent forecasts of the Greater Horn of Africa Climate Outlook Forum [GHACOF 42], the drought might ease during the next three months, albeit at a slow rate, and rainfall during the dry season will remain lower than usual.”

“We cannot forecast how the rainfall in the rainy season from June to September will be, especially amid climate change, but if rain preserves this pace, then the Nile flooding will be slower than usual this year,” he stressed nonetheless.

Egypt mainly relies on the flooding season to compensate for the shortfall in the strategic water reserves in Lake Nasser. Although the tripartite negotiations currently ongoing between Egypt, Sudan and Ethiopia have overlooked the new changes imposed by the drought, Egypt is plagued with anxiety over the unfolding of a more difficult scenario, whereby the flooding rates would continue to decline due to water being stored behind the Renaissance Dam in Ethiopia.