The Syrian government and Syrian Democratic Forces (SDF) accuse Turkey of being behind the dramatic drop in water levels flowing into Syria, something that could spell a major economic and environmental crisis. 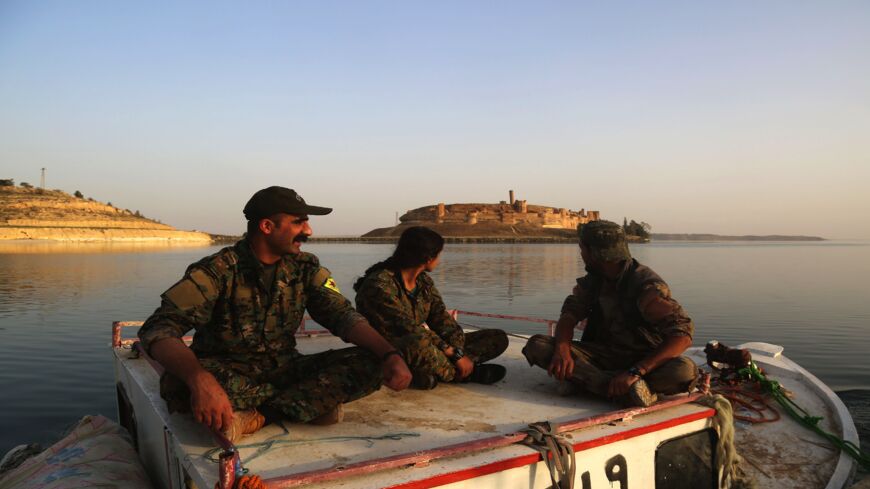 Members of the US-backed Syrian Democratic Forces (SDF), made up of an alliance of Arab and Kurdish fighters, look toward the Jaabar Castle as they sit on a boat at Lake Assad, an enormous reservoir created by the Tabqa dam, on April 29, 2017. - DELIL SOULEIMAN/AFP via Getty Images)

ALEPPO, Syria — The water level of the Euphrates River in Syria continues to decline, causing the riverbed to narrow with the decreasing levels of water flowing downstream from Turkey, falling below 200 cubic meters per second. This dramatic drop in the river’s water level is expected to cause serious economic and environmental disasters.

The Euphrates River in Syria separates between the lands under the control of the Syrian government and the territories held by the Kurdish-led Syrian Democratic Forces (SDF). The Syrian government controls the areas located south of the Euphrates and overlooking its right bank, including the areas extending to the southern countryside of the provinces of Raqqa, Deir ez-Zor and Manbij in the countryside of Aleppo. Despite scarcity in water flows, the government continues to operate water pumps and irrigation projects and systems.

The SDF, meanwhile, controls the left bank of the river, which is seen as its first point of control that spans the areas of northeastern Syria, including the northern countryside of the provinces of Raqqa and Deir ez-Zor.

The Free Syrian Army (FSA), backed by Turkey, controls the right bank of the Euphrates over a distance of no more than 6 kilometers into Syrian territories near Jarablus.

Both the Syrian government and the SDF accuse Turkey of the dramatic drop in the levels of water flowing into the Euphrates River. The Syrian opposition, however, has remained mum, as it does not benefit from the river’s water.

During a tour to check on the water situation at the Euphrates River on May 7, the Syrian government's Minister of Water Resources Tamam Raad called on Turkey to release water into the river according to Syria's and Iraq's fair share. He also urged the international community and international organizations to intervene in this regard.

“Things are still reassuring in terms of securing drinking water and regarding the agricultural irrigation pumps. The drop in water levels is due to the fact that the Turkish side blocked the water flows. Therefore, we call on Turkey to release the water according to the fair share of both Syria and Iraq,” he added.

An official in the government-affiliated Water Resources Department in Raqqa province told Al-Monitor on condition of anonymity, “The Euphrates water pumping stations on the river’s right bank are still operating so far despite the drop in water levels. But the decrease in water levels has halted the generation of power at Lake Assad (a dam), which cut power to the pumping station, prompting us to rely on diesel-run generators to resume irrigation of agricultural crops.”

SANA quoted the general director of the government-affiliated Hasakah Electricity Company, Anwar Okla, as saying on May 5, “Because of the lack of water supplies, the voltage line connecting Tabqa and al-Bawab stations went out of service. This line is the main source of power in the [Hasakah] province’s cities and neighborhoods.”

“Better electricity supply in the province hinges upon increased water levels in [Lake Assad]. This is why it is necessary to release the Euphrates water and stop the Turkish violations by all possible means,” Okla was quoted as saying.

Zaher Hashem, editor-in-chief of the Environment News website concerned with environmental issues, told Al-Monitor, “The drop in water levels is not only due to Turkey’s seizure of large quantities of water that was supposed to flow into the river, but also to natural factors, including drought and lack of rain that have befallen the Middle East region, including Turkey.”

In a Telegram message in early 2021, Turkish President Recep Tayyip Erdogan warned of the danger of drought that would hit Turkey, especially the southeastern and central states, where the Euphrates and Tigris rivers originate.

In the following months, the level of rainfall continued to drop to below the annual average, which reflected on Syria and Iraq, but not on Turkey, as the latter has water reserves stored in hundreds of dams.

In his message, Erdogan said that Turkey built 600 dams and 590 hydroelectric power stations, including nine dams on the Euphrates River.

“There are many factors other than climate change that affect water levels, such as the lack of water in the [river’s] source and the control of the water flowing into Syrian territories. This is not to mention the increased number of dams built along the riverbed. One also ought to mention the heavy use of water for agricultural purposes and the adoption of policies based on heavily irrigated crops such as wheat and cotton, and the use of rudimentary irrigation methods based on flooding crops with water,” Hashem explained.

Commenting on the potential environmental impacts of the water shortage in the Euphrates River, he said, “This could lead to the concentration of industrial and sewage pollutants, increasing the salinity of water, which makes the water unfit for irrigation and drinking, as well as the perishing of fish.”

“Dead fish also cause organic pollution, which poses health risks to the population, whether through drinking the river water or using it in irrigation,” Hashem said.

He added, “The drop in the water levels would also cause the water pumping stations on the riverbanks to stop working. These pumps are used for irrigation. No water means that large areas of agricultural lands would be damaged, which threatens food security for farmers. Also, low water supplies from the river will cause the electricity stations to stop their operation, thus leading to the suspension of several economic sectors.”

“Water pumping and water treatment stations for drinking and irrigation are also threatened to stop working, as they depend on electricity. The same goes for sewage treatment plants that could stop operating too as a result of the dramatic drop in the river water levels. This portends a great environmental and economic disaster,” he warned.