The residents living near the Euphrates River in northeast Syria are suffering the consequences of water pollution mainly caused by oil spills resulting from smuggling operations between the areas held by the Kurdish forces and the Syrian government. 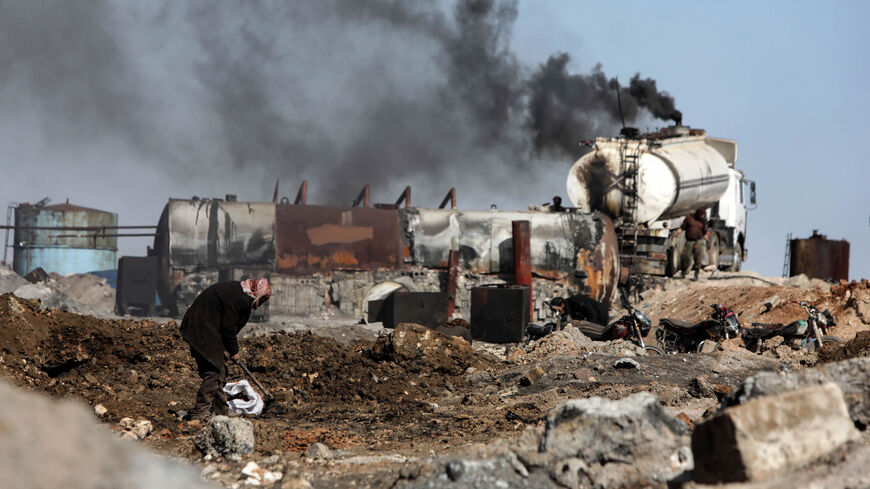 A displaced Syrian man works at a makeshift oil refinery near the village of Tarhin in an area under the control of Turkish-backed factions in the northern countryside of Aleppo, Syria, Feb. 25, 2021. - Bakr Alkasem/AFP via Getty Images

Black oil spills are spotted on the banks of the Euphrates River in Syria, near the oil smuggling points between the areas controlled by the Kurdish-led Syrian Democratic Forces (SDF) and the Syrian government-held areas.

The Euphrates River, the longest in Western Asia and once the main drinking water source in the provinces of the Syrian al-Jazira region, is facing a real catastrophe in light of the soaring rates of pollutants in its water. The river stretches inside the Syrian territories over 610 kilometers (379 miles), flowing inside Syria from Jarablus city near the border with Turkey, passing through Raqqa and Deir ez-Zor and ending in al-Bukamal to pour toward the Iraqi territory.

The river’s pollution in Syria is traced back to several causes. The unstable area in northeastern Syria is controlled by several armed organizations, amid worsening social and service conditions.

Recently, black spills have been spotted on the banks of the Euphrates River, as a result of oil derivatives leakage near the smuggling points in SDF-controlled areas. Through these points, fuel is illegally transported to the areas controlled by the Syrian government on the opposite bank of the river, using very primitive methods. Also, SDF forces repeatedly target oil pipelines extending to the opposite bank.

The ensuing water pollution has caused the death of huge numbers of fish and some other animals living in the area.

A medical worker in the eastern countryside of Deir ez-Zor told Al-Monitor on condition of anonymity, “The leakage of large quantities of oil derivatives into the Euphrates River directly threatens the lives of the residents, especially those depending on the river’s water as a main source of drinking and irrigation water. This caused cases of poisoning, especially among children, the elderly and people with chronic diseases, not to mention the spread of many diseases, including hepatitis, leishmaniasis and other transmissible diseases.”

He said, “A large number of people showed symptoms of poisoning as a result of the contamination of the Euphrates water. The symptoms included high fever, chronic diarrhea, abdominal and stomach pain, and internal infections, especially among children. The situation prompted physicians and health supervisors in the area to urge residents to sterilize water before drinking it by placing a cloth on faucets, then boiling the water and cooling it in clean and sterilized containers.”

The source noted that in addition to the pollution of the Euphrates River, gases resulting from primitive oil refining processes (burners) pollute the air, and spread respiratory and digestive diseases, as well as cancers, in addition to premature births, miscarriages and birth defects in newborns.

Mohammed Taha, a resident of the town of Shuhail in the eastern countryside of Deir ez-Zor, told Al-Monitor, “The black oil slicks are now directly affecting people and wildlife in the area. Large quantities of fish and birds that breed on the banks of the Euphrates River have perished. Weeds and plants that grow on the river bed on which most wild and domestic animals feed have been contaminated. This coincides with a low rainfall rate and a drop in the river water level — in addition to this sewage being drained directly into the river.”

He added, “Moreover, drinking water is not being sterilized since the [Kurdish-led] Autonomous Administration of North and East Syria institutions that manage the area are not carrying out the proper maintenance operations for water desalination plants.”

Taha traced back oil slicks in the area to the great neglect shown by oil smugglers whose main concern is to obtain more money from selling oil derivatives to the Syrian government. “The SDF can stop smuggling operations quickly by cutting off the oil pipelines linking the area to the side controlled by the Syrian regime, and burning the river ferries used for smuggling. But this is not happening in light of the involvement of a number of SDF leaders in smuggling operations,” he said.

He called on the residents of the villages and towns of the eastern Deir ez-Zor countryside to intervene urgently to stop the smuggling of oil and launch a local campaign with the help of international organizations to clean and sterilize the waters of the Euphrates River, remove the black oil slicks and rehabilitate all water purification and desalination plants in the area.

The Syrian government controls the center of Deir ez-Zor city and parts of its eastern, western and southern countrysides, while the SDF controls the eastern countryside, or what is known as al-Jazira region. From time to time, the SDF raids the smuggling crossings that link its areas of control with the areas of the Syrian government. These raids often result in clashes with smugglers, causing spills of large quantities of fuel from damaged fuel tanks.

Mohammed al-Hammadi, a journalist for Al-Sharq News site covering news in the eastern area of Syria, told Al-Monitor, “Oil smuggling operations on the left bank of the Euphrates take place under the watchful eye of the SDF, which charges royalties from the smugglers to facilitate their movement through several river crossings run by both SDF leaders and officers from the Syrian regime.”

Fadel Abdul Ghani, head of the Syrian Network for Human Rights, condemned the SDF’s suspected complicity with smugglers, not caring about the lives of civilians who are affected by the oil spills and the pollution of the Euphrates River.

Speaking to Al-Monitor, he said, “The SDF is not using oil revenues to provide services to the area. The [US-led] international coalition is the one to blame because of its support to the SDF. The coalition ought to hold the SDF accountable for the violations it is committing in the area.”