Jordan is facing an “unprecedented” drought crisis as a number of its dams dried up due to the scarcity of rainwater, which prompted the kingdom to knock on Israel’s door to buy additional quantities of water to meet the current water deficit of 40 million cubic meters. 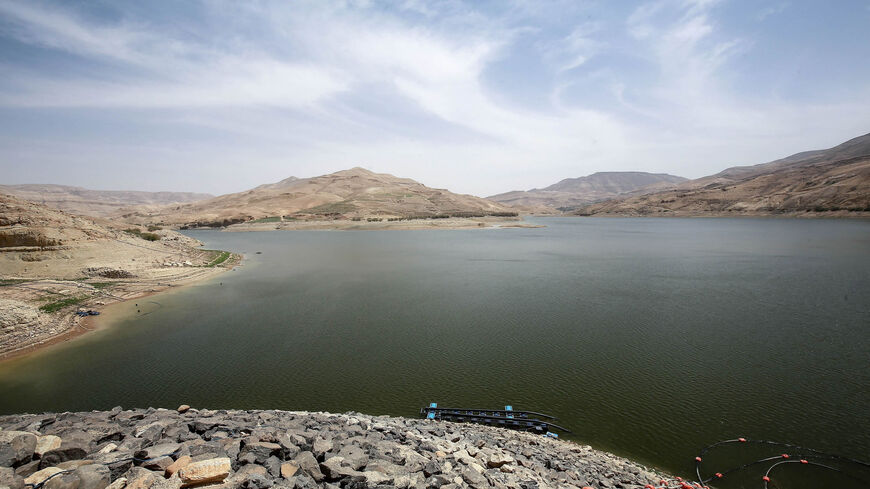 This picture shows a view of the reservoir of the Mujib Dam, the main water supply to Amman, in Madaba governorate, Jordan, April 20, 2021. - Khalil Mazraawi/AFP via Getty Images

AMMAN, Jordan — Farmers in the Jordan Valley are haunted by the specter of drought as the water level of King Talal Dam, the kingdom’s largest dam, reaches dangerous low levels.

The dam irrigates 80% of the agricultural areas and units in the Jordan Valley, and the farmers’ concerns are justified after six dams in Jordan have dried up due to the scarcity of rainwater.

Head of the Jordan Valley Farmers Union Adnan Khaddam told Al-Monitor that “six water dams in Jordan out of 14 have dried up — namely al-Wala, Mujib, Wadi Karak, Tannur, Wadi Shueib and Zaqlab Dam,” which are scattered throughout the kingdom and are used to irrigate agricultural crops.

Farmers put the blame on the Jordanian government, and Khaddam said, “The government stood idly by and failed to prioritize this file. Climate change is part of the problem, but mismanagement has also contributed to the problem amid the absence of any projects or strategic plans to confront this drought.”

On Nov. 9, the Jordanian parliament called on the government to explain the reasons behind this drought and asked it to put forth its water strategy in a special meeting that brought together the Agriculture, Water and Badia Committee in the House of Representatives and officials from the Ministry of Water and Irrigation.

Member of parliament Musa Hantash, who is a water and soil expert, attributed the drought to the light rainfall last winter.

“The dams reached only 60% of their storage capacity last winter, with a total of 178 million cubic meters of a capacity of 336 million cubic meters, but this is not the problem. The problem is that there are no clear strategies to confront the water deficit. This is why we called on the government to explain its water strategies,” he told Al-Monitor.

He said, “There is a large quantity of water that is stolen by farmers and citizens. In the capital, the percentage of losses from networks in Amman is 50%, compared to 80% in some governorates and 10% globally. There should be harsher sanctions."

The kingdom is suffering from a large water deficit, which reached 40 million cubic meters in 2021, according to Bashar al-Bataineh, secretary-general of the Water Authority at the Ministry of Water and Irrigation, who told the Agriculture, Water and Badia Committee, “The water shortage in Amman governorate reached 20 million cubic meters this year."

Secretary-General of the Jordan Valley Authority Manar Mahasneh said in the parliamentary session, “The modest rainfall last winter in Mujib Dam led to its drying up.”

She added, “We have to balance the uses of water for drinking, irrigation and industrial needs while bearing in mind that its use for drinking purposes remains a top priority.”

Former Minister of Water and Irrigation Hazem al-Nasser described this drought in the dams as “unprecedented.” He told Al-Monitor, “There are traditional reasons for the dams drying up, such as the increased demand for water due to the Syrian refugee population, the increase in population and climate change. Add to this some administrative errors on the part of the Ministry of Water and Irrigation and the lack of diligent follow-up on the quantities of water in the dams to check whether they would be sufficient for farmers beyond November’s agricultural season.”

He noted, “We have entered the drought stage. The daily Jordanian per capita share of water is the lowest in the world, standing at 95 liters per day. We have a 40% gap between demand and supply. Now we can provide 60% of our needs for drinking and agriculture. The authorities should have granted this file greater attention.”

In 2021, the Jordanian government announced its intention to implement a major strategic project to desalinate the Red Sea water in Aqaba called the “National Carrier” as an alternative to the “Bahrain Carrier” with Israel, which is yet to see the light.

According to a statement by the Jordanian Ministry of Water and Irrigation, the National Carrier will operate with an initial capacity of 100 million cubic meters at an estimated cost of about $2 billion with the aim of desalinating and transferring 250-300 million cubic meters of water from the Gulf of Aqaba on the Red Sea to all regions of the kingdom, to secure additional and sustainable quantities of water.

However, Nasser said, “The project needs about eight years to get off the ground. The ministry is yet to tender the project. There were strategic projects such as withdrawing groundwater, but these projects were halted in favor of buying water from Israel.”

In turn, the ministry blamed the low rates of rain and the Syrian refugees for this drought.

Spokesman for the Ministry of Water and Irrigation Omar Salama told the daily Al-Rai newspaper, “The population increase, Syrian refugees in the kingdom, climate change and depletion of underground aquifers by more than 200% are all reasons that have deeply affected the water levels in dams.

Jordan and Israel share the waters of Lake Tiberias and the Yarmouk and Jordan rivers. They also share underground wells. According to Annex 2, which details Article 6 of the treaty text, Israel receives 12 million cubic meters of water from the Yarmouk River in the summer period, and 13 million cubic meters in the winter period, while Jordan receives “the rest of the flow."