Turkey is constructing a border crossing linking the opposition-held city of Ras al-Ain in northeastern Syria with Turkish territory. 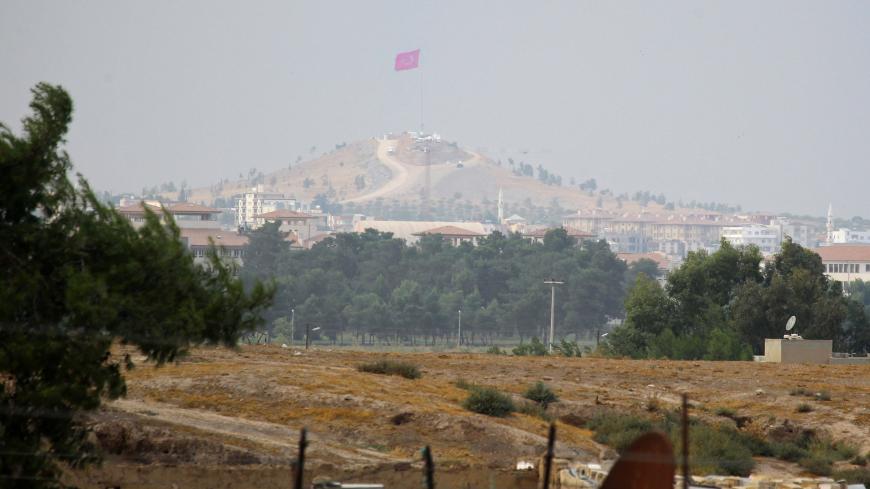 ALEPPO, Syria — Construction is underway to build a commercial border crossing between Turkey’s Sanliurfa province and the opposition-held city of Ras al-Ain in the Operation Peace Spring area in northeastern Syria.

Merhi Youssef, head of the Ras al-Ain local council, told Al-Monitor, “The commercial crossing’s construction is expected to be completed as soon as possible, for it to be ready before Eid al-Fitr, which falls on May 23.”

The Ras al-Ain local council announced April 6 that it had approved the “temporary location of the 15-dunum [5,000 square meters] commercial gate.”

“A committee from the municipality of Sanliurfa has started planning procedures to determine the main road [leading to the crossing] and the buildings [at the crossing], as this gate is expected to open between April and May,” the council said.

Youssef said, “The local council asked the Turkish government to open a commercial crossing and it responded to our request. Construction is already underway and the first step is to open the main road for the border gate in the Abra neighborhood, in north Ras al-Ain. Construction of the crossing's buildings will follow.”

“Lease contracts have been signed with the owners of land where the crossing will be located and the road will pass through, and the rents were paid by the local council in advance,” he added, without disclosing the amounts paid to landowners.

Youssef said, “It will be a temporary crossing to meet the area’s needs until a main border gate that connects Ras al-Ain to Turkey is established over the next two years, between 2021 and 2022, which will be in al-Kharabat neighborhood, in northeast Ras al-Ain.”

He added, “The aim of opening a border gate with Turkey in Ras al-Ain is to secure the area's food, industrial and agricultural needs, and thus revive the area on the economic and humanitarian levels, as well as exporting agricultural products for which the area is famous and sell them at reasonable prices. The crossing eventually aims to ease the blockade imposed on the area by the Democratic Union Party (PYD) militias and the Syrian regime forces.”

Youssef said, “Ras al-Ain, much like the rest of the Operation Peace Spring area, is under blockade, and the border crossings with Turkey are the best way to revive the area.”

Abdullah al-Jashaam, the director of the media office at Ras al-Ain local council, told Al-Monitor, “The border crossing will make it easier for merchants and farmers to import their needs from Turkey, thus reviving the service, agricultural and commercial sectors in Ras al-Ain.”

He added, “Turkey brought in equipment to begin construction and it has started building the crossing’s road and commercial zone, as well as laying the foundations of buildings. The crossing will occupy an area of 15,000 square meters of the border strip with Turkey from Ras al-Ain’s side.”

Jashaam said, “The cost of the project will be entirely borne by the Turkish government, including logistical equipment, construction and road construction, and the work will be directly supervised by Sanliurfa province since the gate falls within its administrative borders.”

He added, “The location was chosen in the Abra neighborhood, which lies directly on the border with Turkey, while vast spaces in the neighborhood are empty [of buildings], making it suitable for the traffic of cargo trucks. A lease contract was signed with the landowners and rent was paid for two years upfront by the Ras al-Ain local council.”

Jashaam explained, “The Ras al-Ain local council, in cooperation with the Syrian opposition-led government, will supervise the management of the crossing from the Syrian side, and trained cadres will be employed to operate the gate.”

The Operation Peace Spring area has one border crossing linking it with Turkey: the Tell Abyad crossing, which reopened in November 2019, after the Turkish army and the Free Syrian Army took control of the area as part of Operation Peace Spring, launched in October 2019 against the Kurdish-led Syrian Democratic Forces.

In a related context, Shaaban al-Ahmad, the director of the media office at the Tell Abyad local council, told Al-Monitor, “Opening a crossing linking Ras al-Ain with Turkey will reduce congestion at the Tell Abyad crossing, which is an important step in the framework of the efforts made by the opposition and the Turkish government to bring stability to the Peace Spring area.”

Meanwhile, Ibrahim Habash, the director of al-Khabour website, which is close to the opposition, said, “The Ras al-Ain crossing that is supposed to open with Turkey will be vital for the revival of the area, and will facilitate the export of its products and crops, such as wheat, cotton and barley, given that the area is one of Syria’s richest agricultural areas, and farmers can thus have more income.”

Habash added, “The crossing will provide job opportunities for the people of the area, be it administrative jobs inside the crossing or through commercial investments, and service facilities that will be established in the area, such as restaurants, cafes and rest houses. In addition, the border gate gives great importance to nearby cities and helps their urban and service growth as they become more attractive for citizens to live in.”

Abdel Hakeem al-Masri, the economy and finance minister in the opposition-led government, said, “A distance of 120 kilometers separates Tell Abyad and Ras al-Ain, and transporting commercial goods through the Tell Abyad crossing to Ras al-Ain is very expensive. It is thus necessary to open a crossing at Ras al-Ain, which will positively reflect on the area's merchants and farmers and reduce the burdens and costs of long-distance shipping.”

Masri added, “Ras al-Ain crossing will be managed by the Directorate of Crossings and General Customs of the Ministry of Finance and Economy in the opposition-led government in cooperation with the Ras al-Ain local council.”