As Turkey touts its humanitarian aid deliveries to Syria's Idlib, critics weigh the six truckloads of supplies against its thousands of tons of allegedly looted Syrian grain. 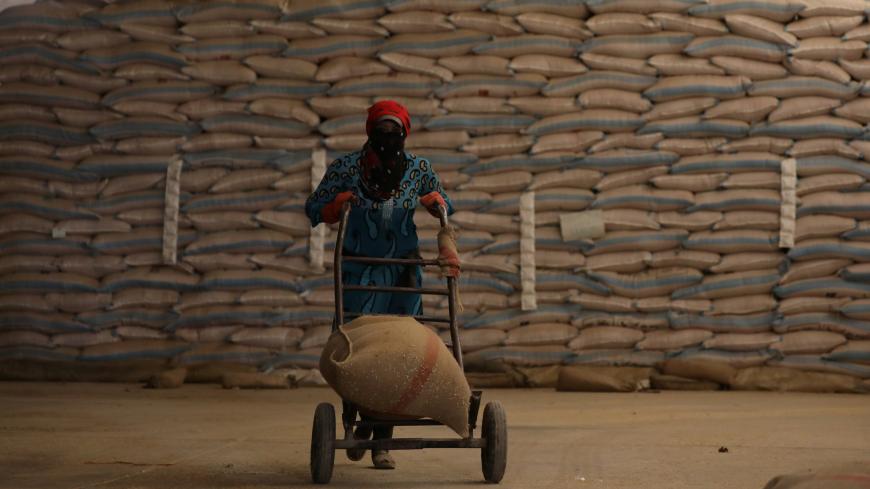 “Truckloads of supplies including flour, clothing and dry food [donated] by the Adana Dosteller and Eskisehir Gunisigi charities entered Idlib through the Yayladagi border crossing in Turkey’s southern Hatay province. The aid will be distributed among families living in tents in Idlib,” Anadolu reported.

Turkey’s generosity to millions of displaced Syrians inside Syria and Turkey alike has been well documented. But critics of Ankara’s Syria policy charge that it's giving with one hand and stealing with the other.

A report released today by Syrians for Truth and Justice, a non-partisan nonprofit documenting human rights violations in Syria, lays out in exhaustive detail how the Turkish government has facilitated commerce conducted by its Syrian National Army allies in looting grain. The grain is from eight silos that were confiscated in October during Turkey’s Operation Peace Spring, which resulted in Turkey’s occupation of a large swath of territory between the towns of Tell Abyad and Ras al-Ain formerly controlled by the United States’ Syrian Kurdish allies.

Based on interviews with a range of actors including National Army commanders as well as employees at the grain silos, Syrians for Truth and Justice unveiled a network of grain dealings conducted by a Turkish government company — the Turkish Grain Board, known as TMO for short — and “armed groups’ commanders who personally seized amounts of the grain storage” and “then sold them to either local or Turkish merchants” and kept the proceeds for themselves. The theft is documented by satellite imagery showing transportation trucks taking the grain away from the silos.

The allegations will further blot Turkey and the National Army’s image in northeast Syria. Ankara is accused of overseeing or directly participating in a panoply of abuses, including summary executions, abductions, looting, crop burning and weaponizing water against the Kurds.

The Kurdish-led administration in northeastern Syria told the authors of the report that it had left behind about 730,000 tons of wheat, barley, fertilizers, cotton and seed as it withdrew in the face of advancing Turkish forces. “This stock is the strategic reserve for the next three years and constitutes 11% of the total stock of Raqqa and Hasakah provinces,” said Salman Baroudo, the co-chair of the commerce committee of the autonomous administration.

A ton of wheat produces around 850 kilograms of flour, and a ton of flour produces 1.2 tons of bread, explained an autonomous administration official to illustrate the scale of the loss.

The Syrian National Army denied that it was engaged in any looting from grain silos but officials from the Istanbul-based Syrian Interim Government and employees of the local councils claimed the opposite.

Syrians for Truth and Justice executive director Bassam al-Ahmad told Al-Monitor in a telephone interview that the looting “fits a broader pattern of abuses as were perpetrated in Turkish-occupied Afrin. Turkey is buying looted wheat.” Afrin is the Kurdish-majority enclave that was occupied by Turkey in 2018. Crimes committed by Turkey’s Sunni rebel allies have been well documented. They include rape, arbitrary detentions and industrial-scale extortion of local olive farmers, with much of their oil finding its way to Turkey and exported to foreign markets under Turkish labels, Germany's Deutsche Welle reported.

The TMO insists that it only imports surplus barley but no wheat from Syria. But the trade is driving up prices, noted Elizabeth Tsurkov, a Syria expert and fellow at the Foreign Policy Research Institute in Philadelphia. She told Al-Monitor, “It's absolutely true that wheat and grain is being looted. I've confirmed it with the factions. They are stealing the wheat and barley that is cultivated in large swaths of land between Ras al-Ain and Tell Abyad and selling it to Turkey."

Tsurkov added that Turkey was offering more money for the commodities “than any other actor in Syria is offering to farmers. Therefore there is a clear incentive to sell to Turkey."

But even as Turkey engages in such transactions, it continues to prevent any flow of humanitarian aid from its borders to the Kurdish-held areas. The COVID-19 pandemic has not softened Turkey’s stance while the collapse of the Syrian currency has compounded people’s misery across the country.

Protests erupted today in Tell Abyad and the town of Suluk, also under Turkish control, over deteriorating living conditions and rising food prices, especially that of bread.

In Suluk, a crowed gathered outside the local Turkish-appointed council and called for its removal, reported the Violation Documentation Centre in North Syria in a tweet. It said in a separate call for action yesterday that Turkish soldiers were targeting farmers on the Turkish-Syrian border. Syrian Kurdish farmer Muhayuddin Abdurazak died after allegedly being shot by a Turkish border guard on May 17.

Thomas McClure, a researcher at the Rojava Information Center, which publishes reports on the Kurdish-controlled region for international audiences, told Al-Monitor that the area affected by Operation Peace Spring encompasses 440,000 hectares of arable land producing up to 763,000 tons of wheat. “Turkey’s instillation of proxy militias ın this once productive region has severely impacted the remainder of northeast Syria and those civilians who have remained in the zone of occupation. The loss of vital arable land places further pressure on the remainder of the northeast, where per UN figures 1.94 million people are in need of humanitarian aid,” he noted.

McClure backed up Syrians for Truth and Justice, saying, “Grain silos were rapidly looted, with tens of thousands of tons of wheat transferred to Turkey for sale or sold to local merchants at extortionate prices. Bread, the local staple, doubled in price in the months following the invasion, while other local essentials like cooking gas are now five times as expensive as elsewhere in northeast Syria."

The governor of Turkey’s Sanliurfa province, where the occupation is administered from, told Anadolu last week that Turkey would be opening a new gate between Ras al-Ain and the Turkish border town of Ceylanpinar. Abdullah Erin said the gate would be “for both Ras al-Ain and Ceylanpinar,” much as the opening of a gate from Turkey’s nearby border town of Akcakale had been for Tell Abyad. The pro-government Daily Sabah reported, “Citizens frequently voice that daily life is getting better as a result of the reconstruction of infrastructure” in Tell Abyad and in Ras al-Ain. Today’s protest paints a different picture.