The ethnic cleansing of Christians in Mosul has alarmed Aleppo's large Christian community, which criticizes the West for failing to protect the Middle East's Christians. 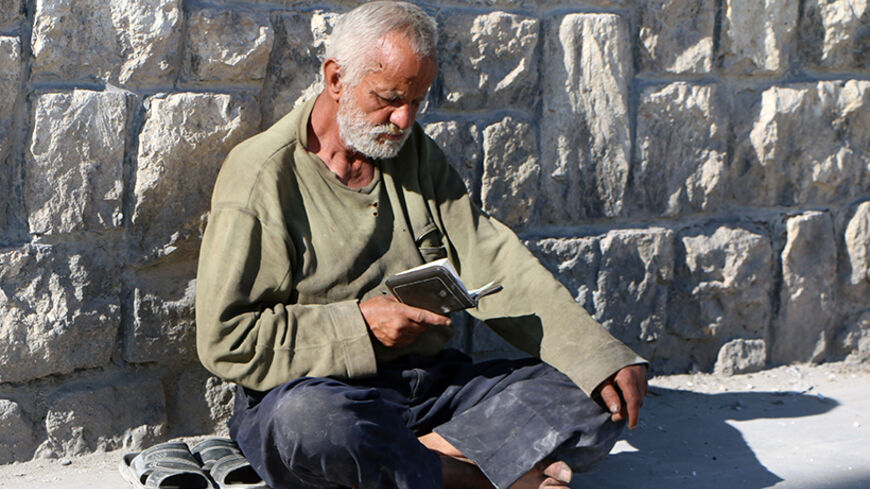 ALEPPO, Syria — Walking through the largely Christian neighborhoods of Aleppo city — Azizieh, Siryan, Sulaimaniyah and Midan — you can still see the posters of the two bishops kidnapped by Islamist militants last year hanging on shop windows, walls and even cars. The people here haven’t forgotten them; the event is still as painful and fresh as if it had happened just yesterday. The bishops’ kidnapping was a symbolic event, indicative of the larger collapse of interfaith communal relations in a country under the strain of a sectarian civil war, and marked the end of a long era of relative peace and safety for the Christians of Syria.

The streets themselves portray a deceptive and surreal kind of war “normalcy,” the kind where pockmarked buildings, mortar holes on the roads, shredded cars, even bloodstained sidewalks are the usual and expected sights as people go about their daily lives without a second glance. This is life now, this is reality here. What it was like before the war is no longer relevant, the memories of those distant and beautiful bygone days do not matter or factor in any more.

Fear is palpable in this city; it hangs heavy in the air everywhere you go, like a potent and nauseous perfume. You can see it in people's eyes, in the deep lines on their faces; you can hear it in the way they talk; it’s in their conversations, it’s all they ever talk about.

But fear of a new kind permeates this ancient and deeply rooted community. Genocide and ethnic cleansing are very real threats that haunt the collective conscience of Syria’s Christians. The terrible fate that befell their co-religionists across the border in Mosul has driven these points home in a rather blunt and frightening way. The genocidal, nihilistic death cult of the Islamic State (IS) is hell-bent on destroying everything that is not exactly it, and has been on an unstoppable rampage which has left a trail of decapitated bodies and mass graves in its wake, usually those of ethnic and religious minorities. The militants make no secret of their genocidal campaigns of mass murder and medieval violence; on the contrary, they openly celebrate with glee and revel in them. It is not a means to an end; for them, it is the end itself.

Yousef is a shopkeeper in the predominantly Christian neighborhood of Sulaimaniyah, which has seen almost constant rebel shelling since the civil war divided Aleppo in July 2012. His brother serves in the Syrian army in Damascus. In conversation, he conveyed to me some of the predominant questions and anxieties going through his community.

“Why aren’t the moderate Muslims doing more to stop the extremists in their midst?” he asked bitterly. “Do they agree with their ideology and extremism? We saw hundreds of thousands of protesters on the streets against the abuses of the regime, so why are we not now seeing those thousands of protesters against what IS is doing? Worse, we are now seeing many people and rebel groups joining them. There are so many hundreds of these Islamic rebel groups, but they are all the same, they all have this extremist ideology against us. My conclusion is that these groups and IS are fully supported and backed in what they are doing by the anti-government forces."

The Christians of Syria had for the most part tried to stay out of the country’s raging civil conflict, but had often found themselves embroiled in its messy and bloody events. On more than one occasion, the Christians became the focal point of action, as in Maaloula, Yabrud and Kassab, as well as high- profile kidnappings of nuns and clerics.

But there are voices starting to question whether they should remain neutral in a conflict which they view as having mutated to blatantly targeting them and threatening their community with annihilation. Many believe that taking up arms, at least for self-defense, is a wise choice, but others feel it would only further enrage and inflame their worst enemies, spurring them into perpetrating even more heinous crimes.

As with many of West Aleppo’s inhabitants, some Christians too have fled the violence that has torn apart their city; many will never return. But unlike the mass exodus of Christians seen elsewhere, Aleppo’s Christians have largely stayed in their city, suggesting that Aleppo’s Christian community remains attached to its ancestral home, and are an integral part of the city’s diverse social, ethnic and cultural mosaic.

But fear of the kind of ethnic cleansing that is being seen in Iraq strikes deep. George, a mechanic who owns a garage in Sulaimaniyah, told me, “The Christians of Aleppo will not stay if the regime loses control of the city. They will be finished here, maybe for good. The takfiri jihadists will make sure of that. Their plan is to clear the nation of all non-Sunni people. They are now using fear tactics and propaganda to intimidate people to leave even before they arrive; it’s that easy. This is why they do all their grisly crimes on camera, to win without firing a bullet. And when they enter new areas, they burn down our churches and confiscate our homes and businesses. They want to erase all traces of us from our own lands. What kind of message are they spreading? Why would you want someone to join your religion by the threat of death?”

George accuses the West of being complicit in the removal of Christians from the Middle East. “Why didn’t the United States take military action when the ISIS persecuted Christians in Raqqa and Mosul? Why only now when it is Yazidis being targeted? There is a plot to remove all Christians from the Middle East, it is crazy, the West has the same plan as the terrorists for us! It is clear, look, now France is taking in all Christian refugees from Iraq, but in Mali it sent in its army to defeat the terrorists. Are they only terrorists in Iraq and Mali, but revolutionaries in Syria?”

Many of the points Yousef and George raised were being echoed across the Christian community in Aleppo, indicating their shared predicament and anxieties no matter what their political affiliations. Not all Christians in Aleppo support the regime; in fact, a large number of them do not, but equally significant is that you won’t find any that support the rebels, either.

The recent repeated rebel shelling of the Syriac Catholic Church, a large and iconic building in the heart of the old Christian community at Azizeh, is seen by many as a clear message by the rebels, revealing their true intent toward their community.

“There is no more need for the pretense of liberation and freedom.” Yousef said, “They [rebels] have successfully sold that to the outside world while they pursue their real agendas inside Syria in broad daylight.”