Five years into the Syrian conflict, Syria's Christians continue to fight for their existence, turning to the regime as a last resort. 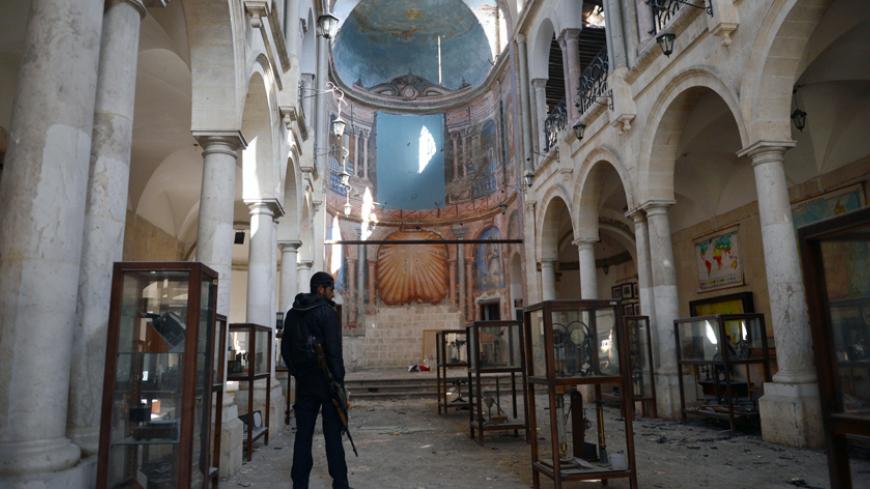 The conflict in Syria entered its fifth year this month, and many parts of the country and their inhabitants are hardly recognizable. This is true of the war-torn city of Aleppo, my hometown, with its mosaic of religious, social and ethnic groups who have all had to deal with the harsh realities and horrors of war on a daily basis.

To gauge the sentiment of one such community, I paid a visit to a quaint part of town. Siryan Adeemeh, or Old Siryan, is an elevated area in the regime-controlled west of Aleppo. A working-class neighborhood home to Christian Arabs of several denominations, Siryan Adeemeh is also inhabited by a sizable Muslim and Kurdish population. It's one of the few areas of Aleppo where churches outnumber mosques, and communal relations had always been jovial and friendly, as could be seen while strolling its maze-like narrow streets, lined with markets, cafes, sandwich shops, bars and liquor stores. But as the conflict took its toll, the atmosphere grew perceptibly edgier and increasingly paranoid.

Siryan Adeemeh sits within sight of the rebel-held areas of Sheikh Maqsoud and Ashrafieh, less than 2 kilometers (1.2 miles) away, and has been on the receiving end of indiscriminate rebel shelling, the most recent of which killed and wounded several people last month. The fear of shelling is ever-present, but just in case one briefly forgets about it, loud explosions and gunfire from the nearby fronts are there to remind you. The din of generators and stench of diesel fumes are your constant companions here, as is the crazy driving of the military pickups rushing dangerously along the main road.

Against this backdrop I went to see Abu Fadi, a middle-aged man, tanned with silver hair and sharp dark eyes — a striking appearance to match his striking personality. He was the de facto mayor of his neighborhood, the go-to guy for news, stories and gossip, a figure much liked and respected by his Christian community and beyond.

As we sat on chairs and wooden stools in one of the back alleys that crisscross this peculiar neighborhood, a few of Abu Fadi's neighbors, mostly middle-aged men, joined us. The mood was gloomy as darkness fell. This was the way the residents had always socialized, sitting together outside their homes, their front doors open. But all talk and gossip these days is about the war — and rumors, lots of rumors. Abu Fadi did not need much prodding. He talked candidly, almost continuously. "We no longer fear speaking out — that was long ago,” he explained. “And we have no other way to express our frustration.”

I asked Abu Fadi about the impact of the conflict on his community, and the prevalent sentiment. “Everything has changed,” he replied, his tone more somber. “Before the war, we [the Christians of Aleppo] were secure as a community, but now we live in fear for our continued existence in Syria. It has never been this way, not in anyone’s living memory. We are feeling persecuted in our own country.”

“So many of our young people left. There are only children and old people now, but can you blame them? Look at the situation here, the conditions are awful. It is dangerous. There are bombs and bullets falling everywhere, and there is no work and no money and everything is so expensive. Is this a proper and dignified life? The young have ambitions, while we are glued to our land and resigned to our fates. They want to go to Europe to start a new life and have better futures. Our community is dying out. If the war doesn’t kill it, emigration will.”

I asked him how he felt about the warring camps in Syria, whom he supports and why. He answered, “There is no question at all about whom we support: the government, of course. It is the only force protecting us from the jihadists and extremists.”

“Why do you feel this way? Aren’t there armed groups and an opposition that are not extremists and represent other Syrians and their legitimate interests, too?” Al-Monitor asked.

"No, not anymore," he said. "You see, at the beginning, some welcomed the protests because they felt it might get the government to fix the problems, you know, like the corruption and other important issues and reforms, like an alarm bell to wake them up. But we soon saw this is not what it was about. They just wanted to take power at any cost; they will destroy Syria to do that. They soon showed their true faces, the religious extremism they were hiding. Anyone who took up arms against the state is wrong.”

“Is this just the Islamic State (IS), al-Qaeda and the foreign fighters, or all? Many groups are local ones,” Al-Monitor said.

“You mean the local ones throwing their rockets at our houses?” he laughed, mockingly. “What difference does it make? Look, we are targeted now as a religious community; this is very clear to us. They want to get rid of us, drive us from our lands that we have inhabited for centuries. They have destroyed churches. Look at Kassab and Maaloula, do you need further proof?”

“In that case, why do you not take up arms to defend yourselves, like the Assyrians did in Hasakah?”

“It is a different case,” he replied. "There they are fighting IS, so there is acceptance for them to form their own militias. They will even get international support for doing this. Here, it is different in Aleppo. If we want to fight we must join government formations and we are called shabiha thugs. It’s all about global politics. But many have joined up anyway.”

Abu George, a neighbor, cut in, “My nephew died fighting for the government and defending Aleppo against those terrorists. We consider him a martyr and a hero, even if those countries outside and the UN consider him a regime shabiha.” Judging by the nods around him, this seemed to be a widely shared view.

"What do you think the future holds for your community?” Al-Monitor asked.

“We are not optimistic. Even if the war ends, the scars will not heal and trust will not come back. Life will not be normal again, and those who left will never return. I just hope to die and be buried on my land, and not be driven out. This is all I want now.”

As I bid the group of men farewell, I could not help but think that despite what Abu Fadi had said about no longer fearing speaking out, this was not really the case, at least not if you’re criticizing the government in public. It was clear enough, though, that people here genuinely felt the incumbent regime was their last hope.

Regardless, hints of dissent and disillusion were always present in the conversation, from the sarcastic ridiculing of the ineptitude and corruption of the city’s officials to the vitriol about shortages and corruption in distributing rations and skyrocketing prices.

Not surprisingly, this anger was seldom, if ever, directed at the top of Syria’s ruling hierarchy. Interestingly, very little was spoken about the menacing presence of the many nonlocal armed men and their armed trucks that now dot the area. Abu Fadi did concede they were a problem — an annoyance, as he put it — but said the worst they do is take items from shops without paying. Maybe he considered this an informal war tax to which they had begrudgingly acquiesced.