Hezbollah Secretary-General Hassan Nasrallah outlines some factors that seem to announce an upcoming clash in Arsal between Hezbollah fighters and IS and Jabhat al-Nusra militants. 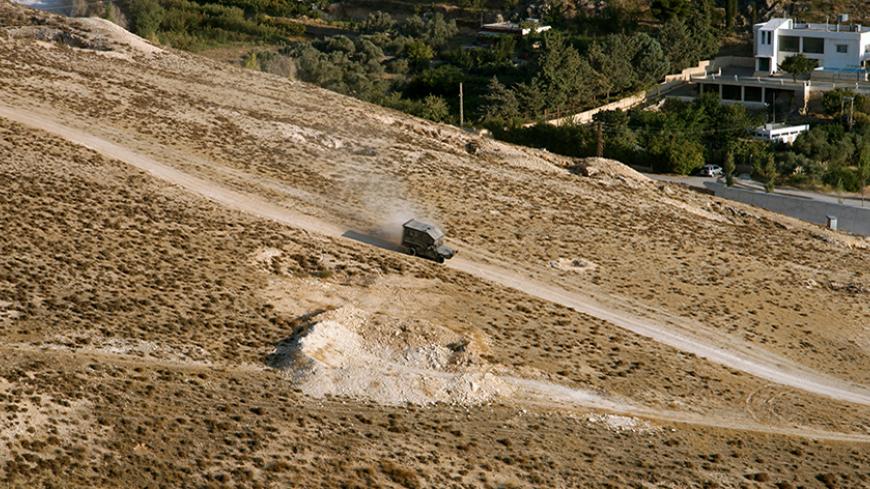 A Lebanese army vehicle drives down a mountain next to Ras Baalbek, a Christian village on the outskirts of Arsal, Aug. 30, 2014. - REUTERS/Alia Haju

BEIRUT — The speech that Hezbollah Secretary-General Hassan Nasrallah delivered May 16 not only announced advances made by his fighters in Qalamoun — located between Lebanon and Syria — but also clearly indicated where the next battle against terrorists will take place. Political and military developments on the ground following the speech seemed to point to the same confrontation site — the barren lands of Arsal — that Nasrallah mentioned.

In his speech, Nasrallah mentioned the sites that his fighters managed to seize over 10 days, throwing out the Islamic State (IS) and Jabhat al-Nusra’s terrorists from Qalamoun. The barren lands of Qalamoun have been contested due to the lack of border demarcation between Lebanon and Syria since the two countries came into being in 1920.

Although Nasrallah was reserved about announcing a final victory in the confrontation, saying, “We are still in the middle of the battle,” he said the terrorists had been expelled from more than 300 square kilometers (116 square miles) in the barren lands of Qalamoun, and how his fighters took full control over the Lebanese eastern border there.

After elaborating on the outcomes of the military confrontations, Nasrallah said, “Let me specify it clearly, again and again; it is the right of the Lebanese people … to look forward to the day their barren lands, the barren lands of Brital, Baalbek, Younine, Nahleh, the desolate lands of Arsal and Machari al-Kaa, are free of any terrorists, and to the day they no longer reside next to [Jabhat] al-Nusra, al-Qaeda, terrorists or beheaders. This is their right [the Lebanese], they look forward to this day and this day will come. Yet, we will not reveal when and how.”

“This is why I want to be very clear. There is still an opportunity. I call upon the state to assume its responsibility. … This battle has begun, but we will not be speaking of its timing, its beginning and its end, spatial borders or stages. … What I am confirming right now is that we are in an open-ended battle in terms of time, place and stages. It is our right, and it is the right of our people in the Bekaa, particularly in Baalbek and Hermel, to look forward to the day our barren lands, border and the gates to our villages and cities are free of terrorist groups. This is the objective behind this project. [I call upon] the Lebanese state to work on it, or else the Lebanese people will take the initiative as they have always done throughout history.”

Nasrallah has clearly indicated that the next battle will take place in the barren lands of Arsal. This seems to be the case because during the Qalamoun clashes that have been raging along the Lebanese-Syrian border since May 6, various media outlets have been saying there is information that armed terrorists had sought refuge in those barren lands. The numbers have not been confirmed, but some are saying hundreds of terrorists are now present in the barren lands. This may be particularly the case because the area is totally surrounded by the Syrian army and Hezbollah from the east, and Lebanese army units from the west, where large Lebanese army units are deployed between the town of Arsal, and its barren lands, which are about 15 kilometers (9 miles) to the east of the town.

Several considerations emerge when speaking of the battle for the barren lands of Arsal. First among these is the presence of Syrian refugee camps in Arsal, in which nearly 90,000 displaced Syrians live, in the vicinity of the town near the desolate lands.

The second is that the town’s residents are Sunni Muslims, and thus there are those who might sympathize with the gunmen, or at least antagonize Hezbollah. This divide has led to a series of clashes between the Lebanese army and gunmen hailing from Arsal and its barren lands throughout the years of the Syrian war. The most recent among these is the fierce confrontation between the army and terrorists in that area Aug. 2 after terrorists captured more than 30 Lebanese soldiers, 16 of whom are still detained by Jabhat al-Nusra and six by IS.

The third consideration lies in the political, and even governmental, positions that are announced by Sunni politicians in Lebanon, which reject allowing the Lebanese army to engage in a battle with the terrorists if they are outside Lebanese territory, even though they are stationed right on the border.

Nevertheless, all has changed after the battle for Qalamoun ended. The terrorists are on Lebanese land now; Arsal and its desolate lands have come in contact with these terrorists. The speech delivered by Nasrallah is a clear warning to the Lebanese authorities that they must assume the responsibilities for safeguarding the security of those Lebanese areas, or else “the Lebanese people” will do so. This implies, according to Nasrallah, Hezbollah’s right to expel the terrorists from the Lebanese barren lands.

While everyone was verifying the content of Nasrallah’s speech, two remarkable developments occurred in the same context.

The Lebanese army announced May 17 that its forces “have targeted with MRL [multiple rocket launcher] a group of gunmen in the barren lands of Arsal, and caused a number of deaths and injuries in their ranks. The Lebanese army intensified shelling on the gunmen’s gatherings in Arsal to prevent any infiltration.”

Foreign Minister Gebran Bassil announced on the same day, during a tour of the towns in the Bekaa Valley located in the vicinity of the confrontation line with terrorists, that “the military institution [the army], which is the hope, and the political authority [the government] should assume their responsibilities in Arsal.” This came as part of Bassil’s clear criticism, which he leveled against what he called inaction in facing the terrorists in that area and other parts of Lebanon.

All signs seem to point to the next battle: the battle of the desolate lands of Arsal. The exact timing and means still need more time to become clear. The battle, and when it will happen, seem to be related to the losses the terrorists in Qalamoun incur and the rate at which the problems they are facing in the desolate lands of Arsal intensify. The terrorists will be caught in a three-way crossfire: Hezbollah fighters from the east, the Lebanese army from the west and their own internal disputes — between IS, Jabhat al-Nusra and other terrorist groups. Add to this their disputes with Arsal residents.