When will Lebanon get their kidnapped soldiers back?

Jabhat al-Nusra has ended negotiations on the release of Lebanese soldiers and security personnel it captured in August 2014, and the Islamic State has rejected efforts to discuss the soldiers it captured at that time. 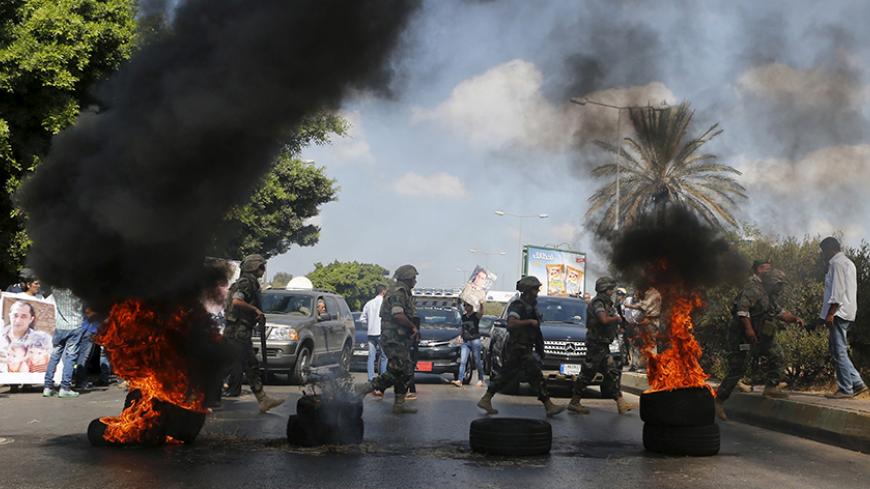 BEIRUT — It has been more than 14 months since the kidnapping of 40 Lebanese military and security personnel by Jabhat al-Nusra and the Islamic State (IS) during fighting in Arsal on Aug. 2, 2014. Without new information from the government on the soldiers' fate, their parents on Oct. 4 announced the resumption of street actions they had suspended, blocking main roads in Beirut, including a road in Riad al-Solh Square, the airport road and the Raouche road, and demonstrating at the Interior Ministry.

Following the mass kidnapping, several parties proposed initiatives to obtain the soldiers' release, namely, the Muslim Scholars Committee, the Salafist Sheikh Wissam al-Masri and Ahmed Fliti, deputy chief of the Arsal municipality. On Aug. 31, 2014, a ministerial crisis group was formed and held a series of meetings to follow the issue. Maj. Gen. Abbas Ibrahim, director general of Lebanon’s General Security, was assigned to conduct negotiations with al-Nusra, with Qatari mediation. Al-Nusra had released some of the soldiers in batches: three on Aug. 5, two on Aug. 17 and five on Aug. 30. Five of the soldiers were killed. The group continues to detain 16 men, while IS holds another nine.

Advocating for their sons' release, the parents repeatedly blocked the Dahr al-Baydar road linking Beirut to the Bekaa Valley and other vital roads in various areas. They also erected tents in central Beirut's Riad al-Solh Square, where they continue to gather daily. In November 2014, after receiving assurances from Lebanese officials that work on the release of their children was ongoing amid a positive atmosphere, the parents called a halt to their street protests, but did not remove their tents.

“According to information we received, the waste, electricity and garbage dossiers took priority over our issue,” the parents said in a joint statement. Since mid-July, Lebanon has experienced numerous demonstrations because of the garbage that began piling up following the expiration of a contract with Sukleen, the company in charge of waste management in Beirut and Mount Lebanon. Plans to close the Naameh landfill, the country's largest waste disposal site, also generated protests.

The scope of the garbage protests soon expanded to include demands related to electricity and water supplies and political issues, such as taking action against corruption and bringing down the government. The parliament had held its last session in November 2014, and the government remained paralyzed by differences among its various camps. Thus, the parents of the soldiers concluded that obtaining their sons' release was no longer a priority.

Hussein Youssef, chairman of a committee formed by the soldiers’ families, spoke to Al-Monitor, stating, “Our escalatory steps and return to street actions are aimed at getting any type of information, be it positive or negative, about our sons. We were expecting positive news early last summer when Maj. Gen. Ibrahim announced the end of the negotiations with al-Nusra, but months passed without us hearing any news. Our actions will be escalatory and progressive.”

Youssef continued, “There are 16 soldiers held by al-Nusra, and their families have been to the barren lands of Arsal to try and see them, most recently on Eid al-Fitr, but then we no longer heard anything about them. Previously, we had decided to open the roads without removing the tents for the sit-in at Riad al-Solh as a goodwill gesture, but now our steps may go so far as to disconnect Beirut from the rest of Lebanon.”

In regard to the soldiers held by IS, Youssef said, “There has been no information about them for nearly 11 months. The last thing we received from them was a video threatening to execute them. We are waiting for the political powers to take action. After all, they are their sons as well, not just ours. They belong to the military institutions, and they have risked their lives to defend this country. Is this how they are rewarded?

“This is why we decided to resume our action and bring the soldiers’ dossier back to the table for discussion. Three national dialogue sessions have been held so far and, unfortunately, no mention of the kidnapped soldiers was ever made. Aren’t these soldiers part of the Lebanese people?” Youssef said. Parliament Speaker Nabih Berri convened the dialogue in August 2015 to bring together all Lebanese parties in a bid to reach consensus on controversial issues.

A security source involved in the soldiers' case spoke to Al-Monitor on condition of anonymity, claiming that the negotiations with al-Nusra have been stalled since July 17, 2015. Al-Nusra reportedly informed Ibrahim, through Ghanem al-Qubaisi, the Qatari intelligence chief, that no deal would be possible unless Hezbollah stopped bombing Zabadani, in Syria, where both groups are engaged in the ongoing civil war. If not, al-Nusra declared, negotiations on a prisoner exchange deal would return to “square one.”

Indeed, this appears to have happened, the source said. According to him, the Qataris told Lebanese officials on Aug. 6 that the negotiations had ended with al-Nusra, which also retreated from any prior commitments and obligations. On Aug. 17, the Qataris told Ibrahim that al-Nusra was considering executing a soldier to set an escalatory tone and pressure Lebanese authorities. Visits by Ibrahim to Qatar and Turkey on Aug. 20 are said to have resulted in the two countries interfering to prevent the killing.

The source said the soldiers held by IS are thought to have been moved from Lebanon to Syria and then to Iraq in June 2015. There has been no news of them since. Lebanon asked Turkish authorities to interfere with IS, but to no avail.

In an Oct. 10 interview, Ibrahim said that the families' protests hinder progress being made, because they lead the kidnappers to stake out an intransigent position. Ibrahim claimed that he had concluded an agreement at some point with al-Nusra through the Qatari mediator, but that its implementation has been suspended. He also said he has spared no effort to open channels of communication to get information on the fate of the soldiers detained by IS, but that all his efforts have been rebuffed.