As Lebanese media outlets report a deal with Jabhat al-Nusra for the release of 16 Lebanese soldiers kidnapped during the battle of Arsal in August, questions remain about support for the terrorist organization in Lebanese territory. 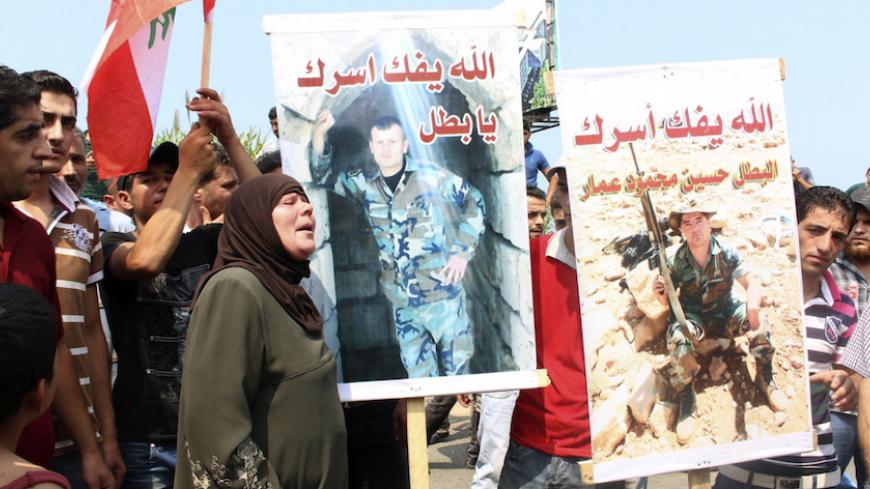 Relatives of Lebanese soldiers captured by Islamist militants in Arsal carry pictures of two of them during a protest demanding their release, in al-Mhmara, northern Lebanon, Aug. 30, 2014. - REUTERS

BEIRUT — During the past week, the Lebanese media has been reporting that an imminent deal between the Lebanese authorities and armed groups will release Lebanese soldiers held hostage in the barren lands of Arsal since Aug. 2. Wadi Press even went so far as to confirm that the deal had materialized at the end of last week.

The press leaks prompted the Lebanese General Security Directorate, the body in charge of the negotiation process between the Lebanese authorities and the armed terrorist groups, to issue a response statement May 23.

A Lebanese government source confirmed to Al-Monitor on condition of anonymity that the negotiations with the kidnappers have come a long way and to expect a surprise very shortly. The same source said that the current negotiations are taking place with militants of Jabhat al-Nusra, which vows ideological allegiance to al-Qaeda, led by Ayman al-Zawahri.

It should be noted that the Lebanese soldiers kidnapped in Arsal on Aug. 2 were divided between Jabhat al-Nusra and the Islamic State (IS). However, the latter remained out of the negotiating process, which was mediated by Qatar. Doha keeps telling Lebanese authorities that it has nothing to do with IS militants and has no contact with them, and even advises Lebanon to ask the Saudi authorities whether Riyadh has any contact with IS terrorists.

For their part, the Qataris have confirmed their ability to negotiate with Jabhat al-Nusra terrorists and have done so, according to the source. He added that the Lebanese authorities have received precise data on the kidnapped soldiers, thanks to the Qatari mediation. It is now certain that only six soldiers are held by IS, while 16 captives are held by Jabhat al-Nusra.

The same source indicated that the kidnappers raised two demands in the deal under negotiation: the release of a number of Islamist detainees in Lebanese prisons and a ransom of an indeterminate amount.

The government source added that the number of Islamist prisoners to be released is not high and may not exceed the number of the released soldiers. It should be noted that Lebanese authorities have succeeded in persuading the militants that it is legally impossible to release any prisoner against whom a final judicial ruling was issued and that the kidnappers’ insistence on names in that category only complicates the negotiation process and disrupts the deal, and the terrorists finally accepted. Therefore, the list of prisoners they want released was limited to people under investigation who are yet to be tried.

The government source asserted that the necessary judicial proceedings started at the beginning of last week on the legal paperwork that will set the judicial conditions for the release of these detainees should the deal with the kidnappers materialize.

The financial part of the deal, the source confirmed, is being handled by Qatar, as the Lebanese authorities will not be funding it. The source also confirmed that Lebanese government parties had paid small sums of money at an earlier stage to the kidnappers within the context of partial negotiations, reportedly aimed back then at stopping terrorists from carrying out threats to kill some military prisoners.

The source made two remarkable points. The 16 soldiers held by Jabhat al-Nusra include three Christians, six Druze and seven Shiites, with not a single Sunni among them. Meanwhile, the fate of the six Sunnis detained by IS is not being negotiated at all. When the source pointed out to this irony, he chose his words carefully. He wondered whether this sectarian separation had anything to do with rumors that some of the soldiers who disappeared Aug. 2 were not actually prisoners, but dissidents collaborating with IS.

His second remarkable point was that if the deal is made, the exchange will take place in a region that is completely surrounded on the east by both Hezbollah and the Syrian army. This suggests that the Lebanese military prisoners will not be brought from the Syrian interior to be handed to the Lebanese authorities, but will most likely be moved from a place in the barren lands surrounding Arsal or even be brought from the heart of Arsal.

This point raises additional questions about the kidnappers’ ability to hide this number of soldiers on Lebanese territory for nine months without any indication of their hiding places. This issue also raises questions about the extent to which these terrorists enjoy the support of Lebanese people in Arsal and its barren lands, as they facilitate the movement of the terrorists and provide them with all the coverage they need.

Despite the questions, the government source confirmed that the Lebanese people are hoping for the deal to be completed and for the kidnapped soldiers to be released at a reasonable price, despite all of the suspicious signs.