The Lebanese General Security’s arrest of Ahmad al-Assir raised concerns about the life of the kidnapped soldiers in the Bekaa, although a security official confirms that there are no apparent ties between Assir and Jabhat al-Nusra, which is holding the soldiers hostage. 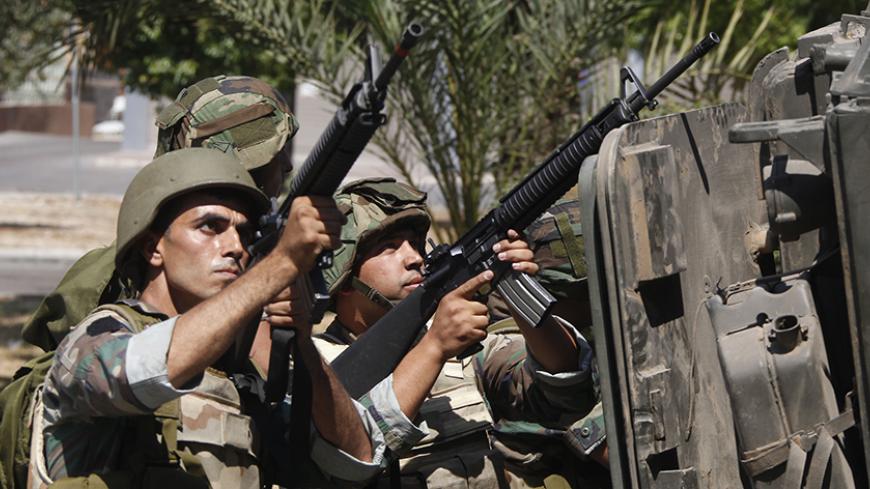 Authorities in Beirut hailed a security success on Aug. 15. The General Directorate of General Security, the body responsible for security at border crossings, facilities and ports, announced the arrest of Ahmad al-Assir, one of the most wanted men in Lebanon.

Assir had been at large since June 24, 2013, after violent clashes between his gunmen and a unit of the Lebanese army in Abra, the Sidon suburb where he lived in south Lebanon. Years before, Assir was an average Sidon citizen who in 1997 decided to become a Sunni cleric, evolving into a Salafist sheikh. That same year, he took up residence in a building in Abra that he turned into a mosque for a group of his supporters. Assir’s movement took shape over the years, until its culmination with the eruption of the Syrian crisis in March 2011. He attracted many young followers with his fiery preaching, especially against Shiite Hezbollah, Iran and Syrian President Bashar al-Assad and his regime.

Assir’s rhetoric eventually transformed into protest on the ground. He and his supporters held a sit-in in Sidon from June to early August 2012 to demand, as he proclaimed, “the rights of Sunnis in Lebanon.” They blocked the road between Beirut and the south, a road vital to Hezbollah, whose strongholds are scattered from the outskirts of Beirut to the border with Israel.

Their protests escalated during 2012 and 2013, leading to several armed clashes between Assir gunmen and Hezbollah fighters. In addition, a violent confrontation occurred between his men and the army on June 23, 2013, when his supporters attacked an army checkpoint near his mosque, killing 10 soldiers. The army responded with a massive attack on Assir’s headquarters two days later that left 18 soldiers dead along with Assir gunmen. Assir fled, disappearing until Aug. 15, 2015, when he arrived at Beirut International Airport after having changed his appearance. He carried a fake passport, claiming to be a Palestinian named Khaled el-Abbasi. According to General Security, Assir had planned to fly first to Cairo, and given that he had obtained a Nigerian visa, on to Nigeria.

After the announcement of Assir’s arrest, a wave of concern emerged about the fate of some 25 Lebanese soldiers and security personnel kidnapped in Arsal in August 2014 and held by Jabhat al-Nusra militants. Fear of a renewed threat to their lives in retaliation for Assir's detention began to circulate along with expressions of concern by the soldiers' parents in light of rumors that Assir had had ties with the extremist Sunni organization. As the judicial investigation and interrogation of Assir proceeded, their concerns began to fade in the absence of threats on the part of Jabhat al-Nusra. Concerns remained, however, that Assir’s detention might hinder an agreement reached by Lebanese authorities and the kidnappers for the soldiers' release.

A Lebanese security official requesting anonymity told Al-Monitor that Assir’s detention is not likely to significantly impact the detained soldiers situation. He said that the interrogation of Assir has not uncovered any security communications between his supporters — mostly Sunnis from Sidon and its environs who helped him hide in nearby towns, including Iqlim al-Kharroub and Jadra for some 14 months — and parties belonging to the Islamic State (IS) or al-Nusra.

The official said that Assir’s group does not have close ties to the extremists holding the soldiers on the Lebanese-Syrian border in the Bekaa. Otherwise, Assir would have tried to move from his hiding place to the east, toward the Bekaa, to areas controlled by Jabhat al-Nusra or IS. That he chose instead to try to escape via the Beirut airport indicates a rift of some sort between the two parties, perhaps due to a lack of knowledge about the other or a lack of trust, to name a few reasons. This is also why Assir's arrest is not likely to have an impact on the military prisoners. This theory is supported by Assir's arrest being met with silence from Jabhat al-Nusra and IS and no evidence via the internet of official statements of any intention to escalate matters in the aftermath of his arrest. Assir’s plan to flee to Nigeria, according to the security official, is additional evidence that he was not counting on receiving protection from extremists groups in Syria or with connections to Lebanon.

The official said the armed groups that kidnapped the soldiers are more focused on how to benefit from their hostages, especially in terms of trying to lift the military siege approaching their deployments. For the time being, the official concluded, the kidnapped soldiers' dossier will remain suspended until new developments linked to the kidnappers unfold and lead to the implementation of the agreement for the soldiers' release.