While Saja al-Dulaimi might not be the wife of Abu Bakr al-Baghdadi, Lebanese authorities hope her capture will help free army soldiers being held by jihadists. 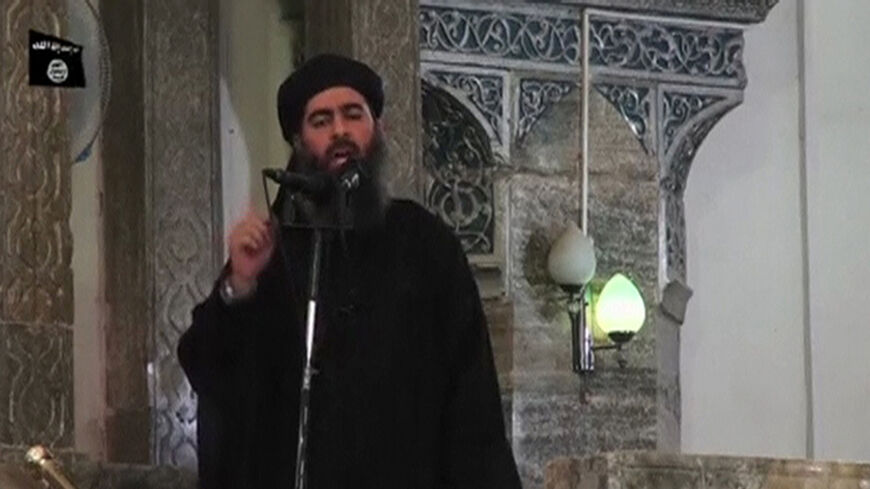 Abu Bakr al-Baghdadi, the reclusive leader of the Islamic State, makes his first public appearance at a mosque in the center of Mosul, in this still image taken from an Internet video, July 5, 2014. - REUTERS

It is not the first time Saja al-Dulaimi has made headlines. The woman who Lebanese authorities and local media insisted was the first lady of the Islamic State (IS) was detained in late November, along with her daughter, at a checkpoint in Lebanon using a fake ID. A Lebanese security source told Al-Monitor that Dulaimi had been under scrutiny since earlier this year. “[Jabhat al-Nusra] insisted back in March on including her in the swap that ended the kidnapping of the Maaloula nuns. The negotiators said on their behalf that she was very important, and they were ready to cancel the whole deal for her sake.” He added, “It was later revealed by Abu Malik al-Talli, one of al-Nusra’s leaders, that she was Abu Bakr al-Baghdadi’s wife.”

It has come to be understood in Lebanon that Dulaimi's arrest is part of an effort by Lebanese authorities to secure a deal to free 27 Lebanese army soldiers captured by Jabhat al-Nusra and IS during battles in the town of Arsal, on the Syrian border.

“There is a need to break the deadlock,” said an official Lebanese security source. “This is not to say that the arrest of Dulaimi was a goal in and of itself, but this adds to the cards that could be used. She’s important to them, and our soldiers are much more important to us.”

Asked whether she is Baghdadi's wife, the source replied, “There’s no document that proves she’s his wife. It’s what [Jabhat al-Nusra] said. While Daesh [IS] didn’t comment officially on the allegations, some say she was his wife when he used to live in Syria, back in 2006. Speculation. Nothing more.”

On March 10, Abu Azzam al-Kuwaiti, the slain deputy emir of Jabhat al-Nusra on the Lebanese-Syrian border whose Twitter handle was Abou Azzam al-Mohajer, tweeted, “If only you knew, my brother, with the state who was released in the negotiations, you would have cried a bit and laughed a lot.” Later, Talli, his superior, tweeted from his account, “Of course, God blessed, and our sister, the wife of Sheikh Abu Bakr, God bless him, was freed by us. We did this because it’s our duty to.”

In an April 2014 interview, Lebanon’s general security director, Gen. Abbas Ibrahim, revealed part of what Lebanese security knew about Dulaimi. He said, “The Syrian security discovered on March 9 that Saja Khalaf was indeed Saja al-Dulaimi, whose two children were given to a childminder to look after them.” He further stated, “[Jabhat al-Nusra] were keen to free her. They were ready to end all talks if she wasn’t part of the deal. She doesn’t seem to be a fighter. In her mid-20s, she hid a fabulous beauty behind her veil.”

The security chief also said, “When I told her that her husband was waiting for her, she said her husband was dead.” According to him, “Her father is a high-ranking al-Qaeda operative. One of her sisters was killed in a suicide bombing, while the second one was arrested before detonating herself.”

Saja’s sister Duaa was 17 when she was arrested in Erbil before she could blow herself up. An Iraqi security source explained to Al-Monitor that both Saja and Duaa are from a jihadist family. “They are from the Dora neighborhood in Baghdad; her father, Ibrahim al-Dulaimi, was a high-ranking al-Qaeda member who later entered, with al-Nusra leader Abu Mohammed al-Golani, into Syria on orders from Baghdadi, who was the emir of the Islamic State of Iraq. The father was killed a few months ago.”

The source elaborated, “They are 10 — seven girls and three boys. The three brothers are jihadists. One with [IS], another with the Green Battalion and a third with al-Nusra. Duaa, the daughter arrested in Iraq, was married to a member of IS. He was later killed in Beiji, northern Iraq, and she went to Erbil to detonate herself and kill innocent civilians.”

Whether Saja al-Dulaimi is the wife of the self-appointed caliph or the daughter of a senior al-Qaeda operative or the sister of three devoted jihadists, it is obvious that the woman is not a nobody, but a somebody very important. This alone could mean a lot to the families of the Lebanese soldiers now held for months by Jabhat al-Nusra, perhaps a light in the darkness.