The female 'rock stars' of terror

Women such as Saja al-Dulaimi and Joumana Hmayed are often used for smuggling messages, money and arms by extremist groups in addition to suicide bombing operations. 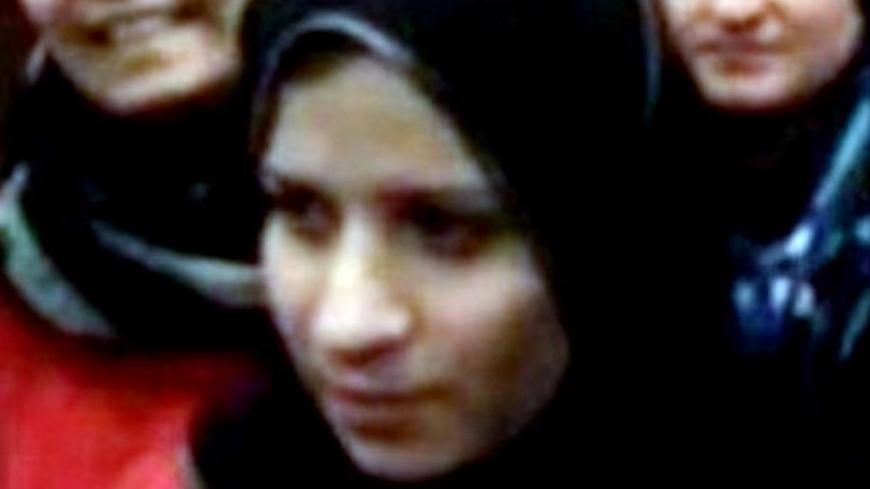 Saja al-Dulaimi, thought to be a former wife of Islamic State leader Abu Bakr al-Baghdadi, is believed to be shown in this undated video still. - YouTube

Extremist groups have often publicized the role of women as caregivers responsible for raising a future generation of militants willing to die for the Islamic cause. However, with the outbreak of the civil war in nearby Syria, women have come to play a more prominent, albeit indirect, role in terrorism around Lebanon.

Last December, Iraqi citizen Saja al-Dulaimi was arrested in north Lebanon while traveling with counterfeit documents. The woman, who belongs to Iraqi's large al-Dulaimi tribe, is believed to be the daughter of an Islamic State (IS) emir and the sister of a woman allegedly behind a September 2008 suicide attack in Erbil.

Dulaimi is also believed to have been briefly married six years ago to IS leader Abu Bakr al-Baghdadi. A military court charged Dulaimi and her current husband, Kamal Khalaf, who accompanied her when she was arrested, of holding contacts with terrorist organizations and planning to carry out terrorist acts.

Authorities also reported that Dulaimi received at least $200,000 via wire transfer agencies and charity organizations and then transferred the money to militants operating along Lebanon’s border with Syria.

“The longer a conflict drags on, the more chances women will come to play a more important role in it, which is the case of Dulaimi within the context of the Syria conflict,” says sociologist Carole André Dessornes, the author of "Women Martyrdom in the Arab World: Lebanon, Palestine and Iraq."

Dulaimi is not the only woman to have espoused the jihadi cause in the Land of the Cedars, where a growing number of women have been suspected of collecting intelligence, passing messages and distributing funds to radical groups.

Such is the case of Joumana Hmayed, a Lebanese national who was charged on March 10, 2014, by military Justice Fady Sawan for participating in terror acts. The Arsal resident was arrested in February 2014 for attempting to transfer a booby-trapped vehicle from her village bordering the Syrian Qalamoun area — where extremist organizations such as Jabhat al Nusra and IS reside — to the Bekaa.

“Women generally tend to attract less attention than a man, which can be useful in such operations,” remarks Dessornes.

A Lebanese officer speaking to Al-Monitor on condition of anonymity shares that opinion, remarking, “We noticed that women were often used to smuggle money, messages and weapons in certain areas, such as Ain al-Hilweh.”

Ain al-Hilweh is a Palestinian camp known as a bastion of Salafist extremist organizations including Jund al-Sham, Fatah al-Islam and Shahab Muslim. It has also been a refuge for radicals such as Fadel Shaker, a singer turned militant, and Tripoli resident Shadi Mawlawi, a man involved in terror activities and accused of recruiting for Jabhat al-Nusra. Both are believed to have resided in the Palestinian enclave at one time or another to escape the scrutiny of the state.

It's often said that Dulaimi and Hmayed are considered "rock stars" of women-led terror in Lebanon, while other women have played less noticeable roles in terror networks.

“Women are searched with less scrutiny than men, which means that they are often able to smuggle knives and phone chips into prison while visiting their relatives,” says the officer, referring to Islamist prisoners detained in Roumieh prison. Until a raid was carried out in January, Roumieh was known to Lebanese intelligence as an operational center for terror organizations.

Dessornes explains that women are often used by extremist circles in this manner, a situation common during conflicts. “A similar trend was witnessed during World War II, as well as during the Lebanese civil conflict,” says the sociologist. Lebanon was the first country in the Middle East to experience suicide operations by women, the first of which was carried out by 16-year-old Sana'a Mehaidli in April 9, 1985, an attack claimed by the Syrian National Socialist Party. This was followed by a dozen suicide operations conducted by women and targeting the Israeli military or the South Lebanon Army.

In addition to playing an instrumental role as messengers, women also offer a means of mobilization by terror organizations. According to a Lebanese general posted in north Lebanon and speaking on condition of anonymity, when extremists are arrested, it is often their wives, daughters and mothers who harangue the crowds, activities that often result in a confrontation between security operatives and the population.

"These women are very efficient in mobilizing the crowds, generally more than men. They appeal to residents and their sense of honor and in such a case, members of security forces cannot arrest them for fear of a massive backlash," says the general.

While women have come to play a more active supporting role in extremist circles, they have not yet conducted suicide operations in the current conflict in Syria or Lebanon, in contrast to Iraq, where several operations have been carried out by women who belonged to al-Qaeda.

“For the most, we never knew the identity of these women, with the exception of Belgian national Mureille de Gauque, a female jihadist who had converted to Islam and conducted an operation in Iraq in 2005,” says Desssornes.

Abu Musab Zarqawi, the slain head of al-Qaeda in Iraq, was the one of the first jihadist leaders to use women in terrorist operations, often in the absence of male volunteers as well as to ensure greater media coverage. “About 10% of suicide attacks in Iraq are believed to have been executed by women,” according to the sociologist.

Female suicide bombers appear — for now at least — to be a thing of the past in Lebanon, in spite of the supportive role women continue to play in extremist circles. For Dessornes, women’s involvement in terrorist activities is often about self-assertion and a desire to violate local traditions and customs in a society dominated by men.