Roumieh Prison holds a variety of detainees, including terrorists and radical Islamists who pose a challenge to security in the lockup and in the country. 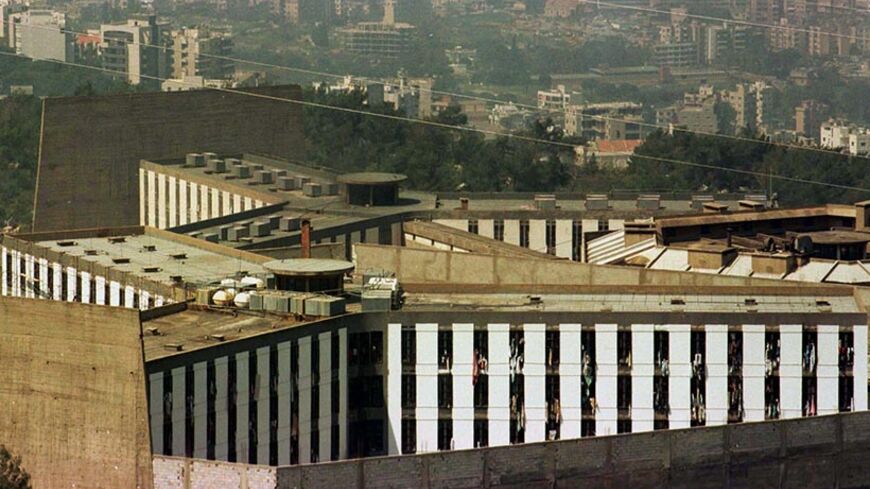 A thousand stories revolve around Roumieh prison, the biggest detention center in Lebanon and the only one based on modern prison design when it opened, in 1970. Located in East Beirut, Roumieh consists of six buildings and is equipped to accommodate 1,500 prisoners, but currently holds more than 3,000. Former Justice Minister Chakib Qortbawi told Al-Monitor this figure has never been below 2,800.

Why is Roumieh associated with expressions like “time bomb,” “terrorist operation chamber” and “Islamist emirate,” which have been used by various Lebanese officials? Why is its name heard every time Lebanon experiences a security crisis, such as this month in relation to a proposed prisoner swap initiated by the Islamic State (IS) and Jabhat al-Nusra and brokered by the Committee of Muslim Scholars, the most important Sunni scholars association in Lebanon. The battle of Arsal that erupted in early August 2014, leading to the death of 19 military personnel and the kidnapping of 35 others, was triggered by Islamist groups with prisoners in Roumieh who hope to force the goverment into agreeing to a prisoner swap.

Security sources familiar with prison conditions believe that the situation in Roumieh began to change after the 2000 Danniyeh incidents, when the Lebanese army battled the terrorist group Takfir wal-Hijra. The fighting lasted six days and led to the deaths of 11 soldiers and 16 militants and the arrest of 37 extremists. Many of those arrested before Danniyeh and convicts accused of organized crime and treason were detained in Roumieh. Today, however, prisoners of a different kind are locked up there. They are charged with terrorism.

The terrorism detenions became more common following the 2007 battle of Nahr al-Bared, between the Lebanese army and Fatah al-Islam, and recently grew with the 2013 Abra incidents, when the extremist group led by Sheikh Ahmad al-Assir opened fire at an army checkpoint, and the recurring clashes in Tripoli between Sunnis and Shiites. The growth of extremists groups in neighboring countries, especially Syria, and their spillover into Lebanon has added to this population. Most of the people arrested or tried on charges of terrorism were detained at Roumieh because other Lebanese prisons lacked adequate security. Moreover, Roumieh is close to the Military Tribunal, which decreases the risks arising from transporting prisoners.

Fatah al-Islam, Jund al-Sham, al-Qaeda and Jabhat al-Nusra prisoners are referred to in the media collectively as the “detained Islamists.” According to security officials, they currently number around 300. They tend to be Lebanese, Palestinians and Syrians, but also include other Arab and foreign nationalities. They are accused of committing terrorist acts or belonging to a terrorist organization, shooting at army personnel and other security forces and bombings.

Some are convicted, while others await trials. The latter occupy a separate section, which they have organized into an “emirate.” They removed the doors on their cells to turn the block into a space without partitions amid an absent or negligible security presence.

These detainees possess sharp tools and abide by their own rules, separate from those of the prison. They also designated a room in their bloc to try prisoners who commit violations. They have even killed some prisoners for violating their rules and causing potential problems. Ghassan al-Qandaqli was strangled in 2013 after being brutally beaten, according to the coroner’s report. It was widely alleged that Fatah al-Islam detainees killed Qandaqli because he had discovered a plan to escape that the former were about to attempt.

The prisoners communicate easily with the outside world, by cell phones for calling and texting and computers through Internet access. Wi-fi is available at all times. These inmates are even allowed to call in to television programs to voice their opinions.

How did the situation Roumieh reach such a point? According to security sources, the prison is not equipped to hold so many inmates in terms of its capacity and security measures. In additions, some military personnel tasked as guards have colluded with Islamist prisoners. Some have been referred numerous times for investigation on charges of professional negligence, especially following organized and repeated escape attempts.

According to the sources, the sectarian and political divisions in Lebanon, coupled with Islamism and delayed trials for the detainees, have given some parties and families of prisoners cause to talk about “injustice” in the treatment of detainees. They contend that the prisons are overcrowded and that they do not provide prisoners minimum civil and humanitarian rights. Thus, some people sympathize with the prisoners and have held sit-ins and activities to generate public pressure for leniency toward them.

Qortbawi believes that talks about the “delay in trials” is an exploitation of the issue to make the prisoners and convicts appear to be “victims of injustice.” He noted that such allegations might have been true between 2007 and 2012, but after halt temporarily for political reasons, trials were resumed, with most Islamist detainees convicted before the judicial council or the Military Tribunal. Qortbawi said the trials were held every Friday in a hall built in Roumieh specifically for this purpose.

Why is the situation in the prison not being addressed? Qortbawi said, “The reasons are political, to satisfy certain political currents.” He said a “political decision” was needed to resolve this issue. He said the Cabinet and the Higher Defense Council have searched for ways to better control the situation in the prison, including restricting prisoners’ communications and allowing only land lines for contacting their families, as in other prisons arround the world.

“The prisoners in Roumieh should be treated as prisoners, not as jailers,” he said, suggesting that the Islamist convicts and detainees control the security forces in the prison, not the other way around. Sources said the situation in the prison resembled the practices and behavior of Jabhat al-Nusra and IS in the regions under their control.

The sources highlighted the threat posed by the two organizations, most notably the image of IS leader Abu Bakr al-Baghdadi. Baghdadi has talked about a new phase of action aimed at releasing imprisoned Muslims everywhere and has vowed to kill the judicial and security officers imprisoning them. The sources pointed out that such a threat could be carried out by storming Roumieh, as was done in prisons in Iraq and Syria, or by kidnapping soldiers to exchange them for the prisoners, as involved the late fighting in Arsal. The sources suggested that despite Lebanese authorities’ rejection of the exchange, circles familiar with the file did not dismiss the possibility of resorting to the exchange at some point. They referred to the United States' exchanging one of its soldiers, Sgt. Bowe Bergdahl, in May 2014 for five Taliban members it held captive.

The prisoners that IS and Jabhat al-Nusra are seeking to release from Roumieh prison most probably consist of detainees who are awaiting trial, since it would be easier to approve their release compared to someone who has been convicted. Thus, the sources believe that the refusal to hold a hearing for Imad Ahmed Jumaa, a prominent Islamist commander, is aimed at keeping his name among the category of detainees yet to be convicted so he can be included in the event of an exchange.

Roumieh Prison is a hotbed for extremists, just like the Ain al-Hilweh refugee camp, Tripoli and Arsal. If a political decision is not taken to remedy the conditions there, it will remain a ticking time bomb.