Will Lebanon swap prisoners with IS, Jabhat al-Nusra?

The families of kidnapped Lebanese soldiers have been calling on the government to agree to a prisoner exchange to secure their relatives’ release, but a number of obstacles stand in the way. 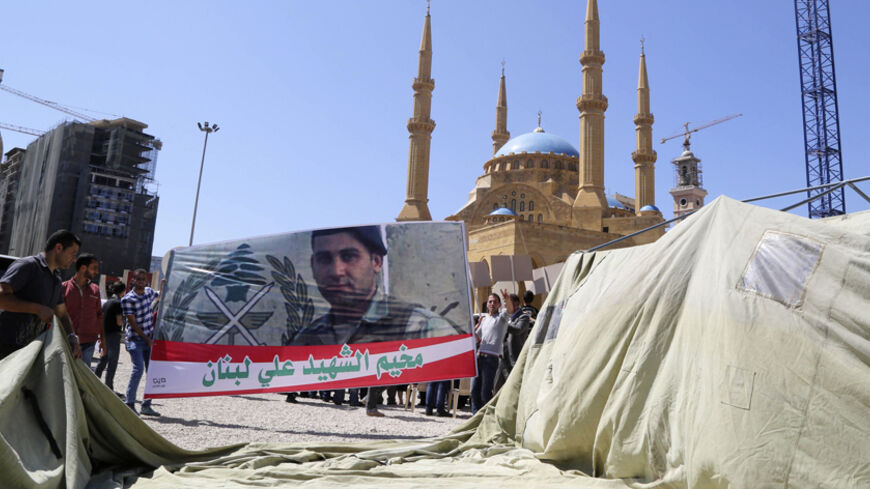 Relatives of Lebanese soldiers and policemen who were captured by Islamist militants in Arsal erect a tent and hold a banner depicting Lebanese soldier Ali al-Sayyed, who was beheaded by IS militants, during a sit-in demanding the release of the remaining soldiers and pressuring the government to act, Martyrs' Square, downtown Beirut, Sept. 10, 2014. - REUTERS/ Sharif Karim

Lebanon is facing difficult times amid the protracted crisis that began on Aug. 2, when militants from the Islamic State (IS) and Jabhat al-Nusra kidnapped a number of Lebanese soldiers and members of the Internal Security Forces. Since then, the two organizations have threatened to kill the men if the Lebanese government fails to meet their demands, most notably the release of Sunni Islamist prisoners detained by the Lebanese government in a number of criminal cases. They have already executed three of their hostages, IS beheading two and Jabhat al-Nusra shooting the third.

Exacerbating the situation is the extremist group's ability to play the strings of internal Lebanese sectarianism. This has prompted the families of the kidnapped military personnel, particularly those from the Sunni and Druze sects, to hold sit-ins to block traffic. They are demanding that the government accept the so-called barter principle and release detained Sunni terrorist suspects in exchange for their relatives being held hostage.

The issue, however, is not as simple, with a number of factors preventing such an exchange. First and foremost, some of the main Lebanese actors refuse to allow the state or the government to succumb to submissiveness and give in to the demands of terrorists. If such a deal were to take place, it could threaten all of Lebanon. What would prevent anyone, especially these two organizations, from resorting to more kidnappings whenever they want to impose a condition on the country?

Another practical consideration preventing an exchange is the legal status of the detainees held by Lebanon. They are primarily being confined in Roumieh Prison, 10 kilometers (6 miles) northeast of Beirut, in the heart of the Christian region of Mount Lebanon. Shakib Qortbawi, a former justice minister and former chair of the Bar Association, told Al-Monitor that the current legal framework does not allow fulfilling the kidnappers' demands, even if the Lebanese government wanted to do so.

Qortbawi said the Islamist detainees have been accused of a number of crimes. Rulings have been issued in some cases, and these convicts are serving sentences issued by the Lebanese courts, specifically the special tribunal known as the Justice Council. There is no way to review or appeal the council's rulings. Meanwhile, some of the other cases are at the trial stage.

No convicted person can legally be released except by a pardon issued by the president of the republic, as per the constitution, or under a general amnesty approved by the parliament. There, however, is currently no president to issue a special pardon, and the Lebanese parliament is incapable of issuing a general amnesty in light of its political composition.

Salim Jreissati, a legal expert and former minister, confirmed to Al-Monitor that there has been consideration about circumventing the legal obstacles. For instance, a proposal has been made for an amendment that allows reducing sentences for cases involving state security — that is, terrorism cases. Such a reduction would be for the benefit of what is in essence a group of Sunni prisoners. The political balance of power in parliament, however, makes such an amendment impossible to ratify.

There also remains a significant psychological obstacle to releasing the extremists, namely, remembering who these people are, what crimes they are accused of committing and the victims of their acts. Qortbawi told Al-Monitor that IS' and Jabhat al-Nusra's demands also involve some 470 people, 120 of whom have been arrested and the rest it wants to protect from apprehension and prosecution.

A significant number of the detainees are Saudi nationals. The Saad Hariri governments were Saudi allies, and thus refrained from trying these defendants for more than four years, from 2007 to 2011. They also handed over a number of detainees to Saudi Arabia, so the number of Saudis still in detention does not exceed 100.

Those still in custody are being held in relation to a number of cases, beginning with the confrontation launched by a Sunni group against the Lebanese army in the Nahr al-Bared Palestinian refugee camp. The clashes lasted from May to September 2007 and left around 160 soldiers dead and more than 1,000 wounded. The cases ended with the bomb attacks that targeted the Iranian Embassy in Beirut in November 2013 and a series of bombings in Beirut's southern suburbs that left dozens of civilians dead.

What if the families of the victims of these crimes announced their opposition to releasing their relatives' murderers? This could impose another set of pressures on the government, as well as constitute an obstacle to submitting to the extremists' conditions. Amid this picture, the government is expected to meet Oct. 2 to discuss the barter principle, which seems a far cry from the concept of principlism.