Government officials have refrained from directly commenting on news that a soldier has defected from the Lebanese army to join Jabhat al-Nusra. 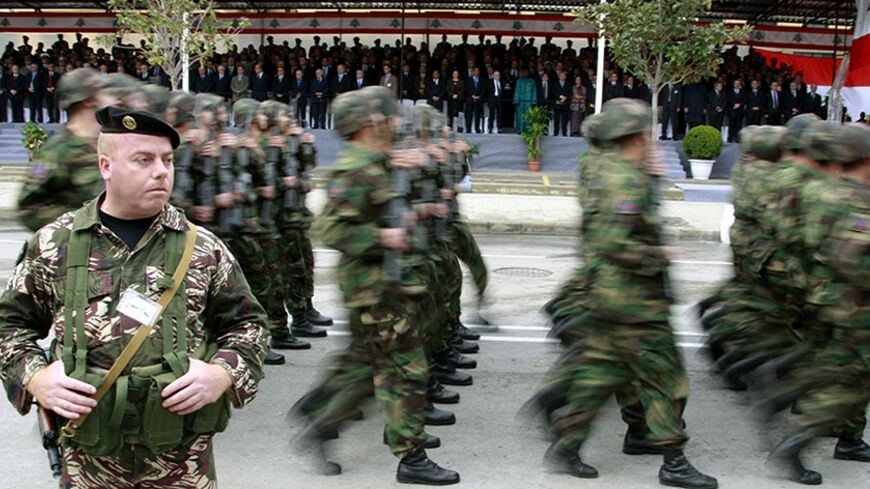 Amid concern and some reticence, the Lebanese have been consumed with a video about a man claiming to be a soldier in the Lebanese army announcing his defection to join Jabhat al-Nusra, the al-Qaeda affiliate active in Syria. Since the eruption of the war in Syria and the involvement of various Lebanese parties, the Lebanese have been in a state characterized by sectarian tension. The soldier's story adds to the mix.

This period also brought the rise of the Salafist sheikh Ahmad al-Assir in the southern capital of Sidon and clashes between his followers and Shiites. The Lebanese army targeted Assir, after which he fled the country, on June 24, 2014. Not one area of Lebanon has been spared sporadic violence.

During the more precarious periods, however, most political powers and religious authorities adopted a calm political rhetoric and media presence aimed at allaying Sunni-Shiite tensions and shielding official security and military institutions from the divisive environment. There were, however, exceptions.

Some political and religious figures, especially extremist Sunnis, leveled criticism against the army, an institution considered by many Lebanese and international parties involved with Lebanon as the only guarantor for the unity and relative stability of the country. They see it as the only entity preventing tensions from flaring up amid the current regional situation. Assir was among the figures criticizing the army through videos and social media.

Some Sunni members of parliament (MPs) in the north close to former Prime Minister Saad Hariri and some Salafist Sunni sheikhs have now followed Assir's lead with recent extremist comments about the army. Sunni MPs in Tripoli and Akkar held a news conference July 10, during which they attacked the army in light of the arrest of individuals in the north wanted for various security-related offenses.

During the conference, MPs close to Hariri used stark sectarian and threatening language, with one person saying, “The security persecution of Sunnis will lead to uncalculated reactions.” They also warned the Lebanese judicial system against pressing charges against “the arrested Sunnis” and accused the army and security agencies of torturing them.

Amid this divisive environment, the news of the defecting soldier appeared. His name is Atef Saad al-Din, a Sunni from a village in Akkar. In the video, he announces his split from the army and decision to join Jabhat al-Nusra in Arsal. The latter is a village in the Bekaa Valley, along the border with Syria. For the past two years, it has experienced a series of clashes between pro- and anti-Syrian regime forces. There were also clashes involving the army, claiming the lives of soldiers as well as civilians.

The news came as a shock to many, leaving some in complete silence: 48 hours after the posting of the video, Lebanese officials had yet to comment. Ministerial sources told Al-Monitor that the issue was being discussed at all levels and was being dealt with, although shrouded in secrecy.

The same sources told Al-Monitor that officials had agreed to respond to what had happened, directly and indirectly, by intensifying the official and public rhetoric of Sunni governmental and religious officials in such a way as to emphasize the importance and necessity of the army in protecting Lebanon and the Lebanese people. This was demonstrated in a statement by Interior Minister Nouhad al-Machnouk, a prominent figure in the Future movement, and a statement by Minister of Information Ramzi Jreij issued after the July 24 cabinet session presided over by Prime Minister Tammam Salam. It was agreed that their statements would be amplified in the coming days to reach a peak on August 1, the anniversary of the Lebanese army. The celebration will be oriented toward the national consensus, especially in Sunni political, religious and popular circles, on the role of the army.

Regardless, rumors have continued to spread uninterrupted. A Lebanese media outlet reported that the deserting soldier's action was not isolated, announcing that 11 other Sunnis, including an officer, had also announced their departure. Government sources, however, denied the news, sustaining the official silence.

The most troubling aspect of this issue, regardless of the authenticity of the news, is that talk of defections from the army will take the Lebanese people back to the civil war. In 1976, months after the eruption of battles, the army was dismantled, and its members joined the forces of their sects, auguring the impending war that would last 15 years.

In 1990, after the civil war ended, the army was not spared more defections and problems. Yet, it was able to endure challenging security incidents, especially battles with extremist Sunni groups — for example, the clashes in Danniyeh, northen Lebanon at the end of 1999, the incident at the Nahr al-Bared camp in Tripoli in 2007 and other clashes in different areas in the north and the Bekaa in the past two years.

The Lebanese are holding their breath while following the unofficial news. It seems that their eagerness to preserve the country is compelling them to be silent, just as the same impulse appears to compel officials to be understandably silent on the same issue.