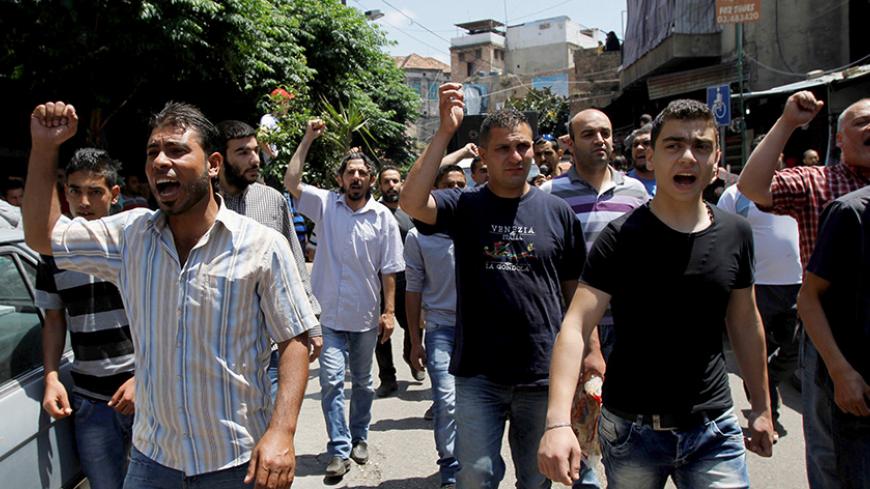 TRIPOLI, Lebanon — The June 21 leaking of two videos showing the torture of Islamist prisoners in Roumieh prison by members of the Lebanese security forces has inflamed the Sunni street in Tripoli, north Lebanon, and underlined the widening gap between traditional political leaders and the young population, which appears to be being drawn further into extremism.

One of the two videos showed several prisoners stripped to their underwear, handcuffed and kneeling in a cell, where they are beaten by guards. A second video shows a handcuffed, bearded man being repeatedly beaten with a baton and forced to kiss his torturer's boots. The victims were identified as Sunni Islamist detainees held in Roumieh prison.

“If it were my brother featured in that video, I would be the first to have joined the Lahd army,” says Ahmad Tahan, a man in his 30s from Tripoli, in reference to the now-defunct militia that once existed in south Lebanon. Gen. Antoine Lahd led the South Lebanon Army for two decades before the end of the Israeli occupation of south Lebanon in 2000.

Tahan’s friend, who prefers to remain anonymous, adds, “I would have joined the Islamic State [IS].”

This type of narrative has become rampant among some Islamist factions in Tripoli, trickling down to the city’s youths. In spite of the crackdown on terrorist organizations such as Jabhat al-Nusra and IS, admiration for these groups, especially IS, has been growing steadily in recent years in the northern capital, considered a bastion of Salafism.

“IS has achieved many military successes and was capable of building a state, which might account for the growing number of its followers,” said Israel, a Chechen Salafist residing in Tripoli who declined to reveal his full name because of past problems with the Lebanese Internal Security Forces.

In the past few years, the city has been rocked by security incidents linked to both IS and Jabhat al-Nusra. On Jan. 10, a bombing involving two Sunni youths, Taha al-Khayal and Bilal al-Mariyan, and claimed by Jabhat al-Nusra targeted the Alawite region of Jabal Mohsen, killing nine and injuring 37 others.

The city also suffered 21 rounds of clashes between the Lebanese army and militants linked to Jabhat al-Nusra and other insurgent groups, such as the one led by Salafist Sheikh Houssam Sabagh and others linked to local politicians, a Lebanese intelligence officer told Al-Monitor on condition of anonymity.

However, the formation of a consensus government regrouping the rival Shiite Hezbollah and Sunni Future Movement, along with the improvement in coordination between the Internal Security Forces and army intelligence, has allowed for a crackdown on the city’s extremist movements. “The threat level has dropped significantly and the main extremist cells neutralized,” the officer told Al-Monitor.

In spite of the improvement in the security situation, the city’s youths say they feel politically marginalized. “The security plan has been mainly applied in north Lebanon, with only cosmetic implementation in Hezbollah territories. It has been enforced by [Future Movement] ministers who are supposed to represent us and defend unjust decisions against the community, but no one has our back anymore,” said Mohamad, a young man who fought briefly in 2012 alongside the Syrian rebels.

In various interviews with Al-Monitor, many of the city’s Sunnis say they consider Hezbollah their nemesis for propping up the regime of President Bashar al-Assad in its fight against a largely majority Sunni rebellion. Mohamad, who asked that only his first name be used, said, “In addition, many of the Tripoli youths feel we no longer have any political or religious leadership.”

The young fighter’s sentiment is echoed by many of the youths interviewed by Al-Monitor in Tebaneh, Qobe and Mankoubin. Others such as Fadi, a man in his 20s from Akkar who also fought in Syria at the beginning of the revolution, takes the argument further, saying, “Interior Minister Nouhad Machnouk, a secular man, should resign.” The minister is a leading figure in the moderate Sunni Future Movement, an officially secular party, and a foe of the powerful Shiite Hezbollah party.

Extremist discourse is reinforced by the positions adopted by terror groups, which promote themselves as the defenders of Lebanese Sunnis. In a recent recorded speech uploaded to YouTube on June 24, Sheikh Ahmad al-Assir — who has been accused of terror activity and of going into hiding after his group battled the Lebanese army in Saida in June 2013 — compared the Future Movement to the “Sahwa” (Awakening). The Sahwa, comprised of Iraqi Sunni tribes, fought alongside US forces against al-Qaeda.

After the release of the two videos, IS threatened to torture nine Lebanese captives and demanded the resignation of the interior minister.

For Salafist Sheikh Nabil Rahim, the Ministry of Interior — which Sunnis considered one of the last bodies capable of enforcing justice between the various communities (mainly Sunnis and Shiites) — has been discredited. Rahim said, “The Roumieh scandal is making Sunnis doubt the whole justice system. How can we trust the cases built against Islamists if confessions are tainted by torture?”

The narrative of terror organizations appears to be filling the political and religious vacuum in Tripoli. The increasing convergence of some of the youth discourse with that of radical organizations is a worrying indicator, particularly as the number of fighters from the northern capital joining IS increases. Since last year, about 400 of the city’s youth are believed to have joined radical organizations outside Lebanon, according to Sheikh Bilal Dokmak, a Salafist from Tripoli.

However, two other interviewees, a Salafist sheikh and an army officer, estimate this number to be closer to the 700 to 1,000 bracket.

The city’s increasing poverty and lack of opportunity can partly explain the rise in extremism in a city where 67% of the population lives below the poverty line. However, indigence and lack of educational and employment opportunities are not the only forces of radicalization in a city where many of the young people feel their grievances are disregarded by the political class. The disaffected youth also appear to be identifying less with their country and more with a larger Islamic umma.

Across Lebanon, the arrest, detention and lengthy trials of Islamists and the leaking of torture videos will slowly but surely drive many Lebanese youths further from the state and into the arms of extremists, which provide a platform for young voices to be heard.