Instability, kidnapping and terrorism have taken hold of Lebanon during a period of turbulence exacerbated by the civil war in neighboring Syria, writes Jean Aziz. 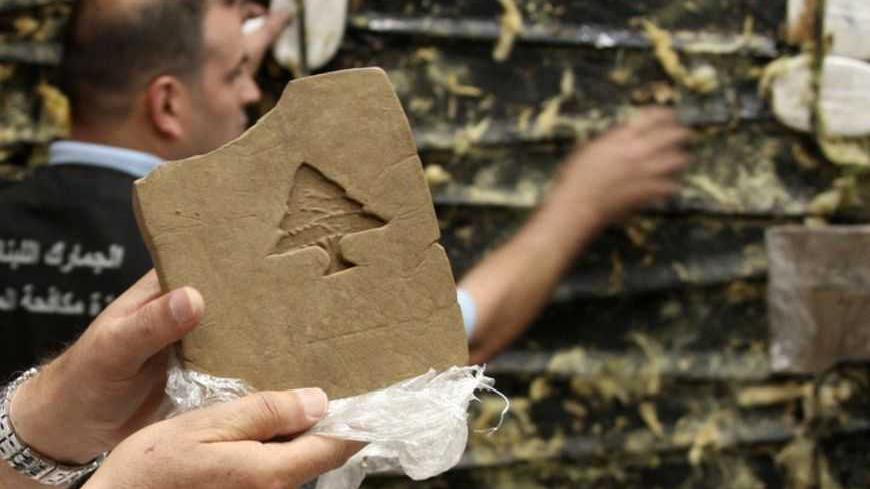 A Lebanese customs employee in Beirut displays a packet of confiscated hashish stamped with a Lebanese cedar and intended for shipment to the Netherlands in 2009. - REUTERS/Mohamed Azakir

It is hard to keep track of the crises currently gripping Lebanon. There is a political crisis leading up to shaky parliamentary elections, a governmental crisis against the backdrop of war in neighboring Syria and an economic crisis amid labor demands and a series of strikes. In addition, the security crisis has been accompanied by peculiar incidents involving kidnapping, drug trafficking and prison riots.

During the Lebanese civil war, kidnappings and counterkidnappings were weapons of war used by rival groups. In the 1980s, political motives led to a wave of kidnappings of westerners. Two years ago brought the new phenomenon of kidnapping well-off individuals and negotiating their release in return for a ransom. It began concurrently with the political, economic and military crises generated by the events in Syria and in recent weeks has turned into an all-consuming and worrying crime wave. It suffices to read the February report issued by the Lebanese Ministry of Interior, which states that security forces had arrested 47 people suspected of involvement in kidnappings.

According to one security official, some abductions remain confidential, because the victims prefer to conduct secret negotiations with the kidnappers and not to inform the authorities. Their actions are prompted by the inability of the security forces in most cases to free the hostages and to arrest the kidnappers even after a ransom has been paid.

Published preliminary official figures cite more than 65 incidents of kidnapping for ransom in the last two years. What is particularly surprising is that in many cases, the kidnappers are said to be known. In more than a dozen instances, newspapers have published the names of the militants who carried out an abduction, sometimes revealing their hiding places.

It is the same scenario every time: The kidnappers contact the victim’s parents and ask for a ransom that starts at hundreds of thousands of dollars. Negotiations ensue, ending up at a lower figure ranging from a few thousand dollars to a maximum of $150,000, as occurred in at least three cases: one involving the kidnapping of an industrialist, another the son of a businessman, and the other a boy from a wealthy family on Feb. 20.

Amazingly, prominent officials have at times intervened to negotiate with the kidnappers. In one case, the media reported that the kidnapper was present at the event celebrating the release of the abducted individual, who had been "freed" following the mediation of a political official. A former minister once confirmed to the media the involvement of a member of his security team in a kidnapping that ended with the payment of a large ransom.

Lebanon has a long history of involvement in the drug trade. Some of the country's remote and poor areas have historically relied on the cultivation of poppies and cannabis. Every year, the Lebanese witness the launch of an official eradication campaign, before the harvest season, during which security units raid these areas and destroy the illegal crops. During these campaigns, which usually begin in late July and last for about two weeks, tractors and agricultural machinery destroy an average of 50,000 square meters per day.

The process, however, is not particularly easy. The “farmers” usually respond to security forces with bullets and sometimes rocket-propelled grenades. In a bold tactic last season, residents held sit-ins, and the bodies of women and children served as human shields to block the tractors. It ended with a settlement between the residents and Lebanese authorities to delay the destruction of the plantings and save part of the "harvest."

The issue of drugs does not, however, end there. In recent weeks, the media has reported on suspected corruption in the security services charged with overseeing difficult drug cases. Most notable among these is a well-known case pending in the courts since August 2011, when it was officially announced that a gang was preparing to smuggle 53 kilograms of cocaine from Colombia to Lebanon. A Dutch national wanted by Interpol for alleged arms and drug smuggling was among those arrested.

The case was highlighted in the Dutch press and followed up by European Union authorities. The Lebanese media reported on the alleged large-scale corruption in the case, including pressure on Lebanese authorities and a large bribe paid to close the case. It led one of the judges to withdraw. The head of the Narcotics Control Bureau ended up before the court to be questioned. A former minister confirmed in a television interview that the drugs seized by the authorities were not actually destroyed, but were in an undisclosed location.

The comical part about all this is a security report published on Feb. 20 stating that phone calls are being made between prisoners in the Central Prison in Roumieh, northeast of Beirut, and drug dealers in various Lebanese regions. Thus the prisoners continue "working" from behind bars amid the inability of the authorities to stop or prevent them from "practicing their profession" as usual.

This leads to the third worrying security issue in Lebanon — the prisons. Lebanese prisons have become bastions of trouble because of severe overcrowding. News of rioting, suicides, murders and targeted killings of prisoners have almost become daily news in the Lebanese press. The most pressing aspect of late, however, is the ability of hundreds of fundamentalists held in Roumieh to essentially take control of the building in which they are being held. The press is calling Building B of the prison the “headquarters of Jabhat al-Nusra in Lebanon."

Jihadists are being trafficked through Building B to Syria, as happened with "former prisoners" like jihadists Abu Talha and Walid al-Bustani. Decisions to assassinate people inside the prison, as happened with Ghassan Qandaqli on Jan. 16, are also made in this building.

The greatest tragedy is the inability of the Lebanese authorities to access this Jabhat al-Nusra stronghold and their willingness to adapt to the group’s presence in the prison. The judiciary has also failed to prosecute these Islamists, and most important, many security and judicial officials have refused to take charge of the case because of telephone threats to their families from inside and outside the prison.

This issue is a ticking time bomb, in a country awash with all kinds of bombs.

Jean Aziz is a contributing writer for Al-Monitor’s Lebanon Pulse. He is a columnist at Lebanon's Al-Akhbar and the host of a weekly political talk show on OTV.