Dane in Lebanon arrested for being alleged IS fighter

Araby Ibrahim, a Lebanese man holding a Danish passport, was arrested in Lebanon on suspicion of fighting alongside the Islamic State in Syria. 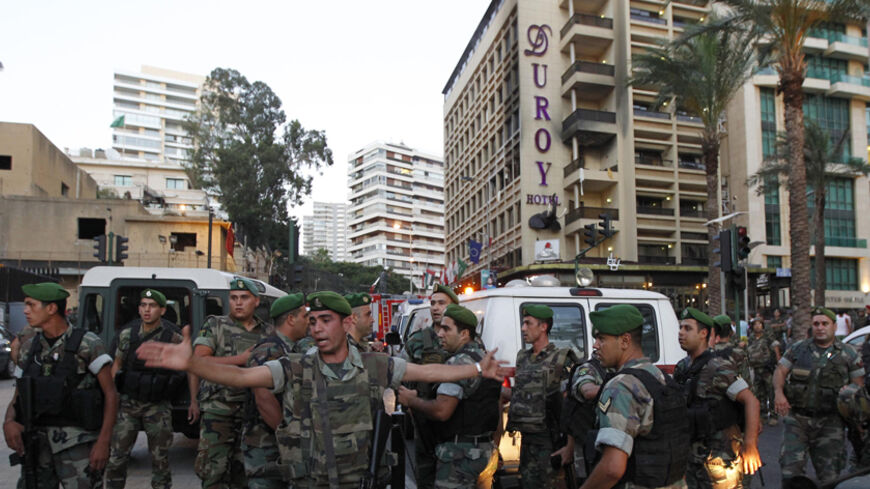 The story of Araby Ibrahim, also known as Araby al-Hadj Dib, an alleged Lebanese jihadist who holds a Danish passport, is just one of many immigrants who decided to return home to fight what they believe is a holy war in Syria. The Danish man was arrested some time in June on suspicion of being a member of the Islamic State (IS).

His lawyer, Fawaz Zakaria, said he was charged with being a member of a terrorist group in Syria in addition to taking part in the internal strife in Tripoli. Zakaria denied in an interview with Al-Monitor that Ibrahim took part in the fighting in Lebanon but acknowledged that he fought in Syria. "He wanted to help the Syrian people get rid of the regime, he fought with several groups; first with Ahrar al-Sham, then [Jabhat] al-Nusra and finally with IS. His goal was to help the Syrian people face the regime's crimes.” Ibrahim is being prosecuted for fighting in Syria, yet Hezbollah militants are fighting with the regime side by side and are killing Syrians without being told a word; this isn't law, this is the corrupted Lebanese system,” Zakaria said.

Ibrahim was arrested and the Lebanese security forces killed his cousin, Swedish passport holder Munzer al-Hassan, who is suspected of being the mastermind behind the Duroy Hotel bombing in Beirut on June 14 that involved two Saudi nationals.

“[Ibrahim] left Copenhagen for Hama, Syria, via Turkey,” a Lebanese security source told Al-Monitor on condition of anonymity. “There he fought with IS against Ahrar al-Sham, before he was captured by this group in early January. But one of the captors identified him, since they know his father very well. They called the latter as a favor and handed him his son,” the source said.

According to the same source, the father brought his son to Tripoli via sea from Turkey. “The 19-year-old man was in custody for a few hours, then released,” the source continued. He was arrested on suspicion of having links to jihadists, but they weren’t able to convict him.

Another source, one close to the family, said that Ibrahim was severely beaten. The family presented a medical report by a doctor from Tripoli, which was translated into English. Al-Monitor obtained a copy of the medical report that reads: “The result of the examination: the [victim] sustained traumas and cutaneous irritation on his body that spread to the back of the neck, the upper thorax and the back chest ribs; the injury resulted from an attack by a hard, solid item.” The report also said that Ibrahim was bruised on his upper body, around his wrists and on his back. The family source denied all allegations linking Ibrahim to IS, claiming that he only came on a visit to Lebanon and was arrested because of false reports.

“The entire family is with IS,” the security source responded to the family’s denial. “[Ibrahim’s] father is known to the Lebanese authorities as one of the main traffickers of jihadists from Europe to the region. He uses a different name in Denmark. His uncle Saddam was killed in clashes with the Lebanese authorities in 2007 prior to the Nahr al-Bared war with Fatah al-Islam, and his uncle Mohammed was arrested in Germany in 2006 for his involvement in the failed train attack.”

Al-Monitor found out that two other cousins of Ibrahim, Al-Mutassem Dib and Hassan Dib, were killed in a twin attack on a Syrian army checkpoint at Krak des Chevaliers in Syria. Al-Mutassem was the suicide bomber who drove the car into the checkpoint and his brother was killed in the clashes that followed the attack. Both brothers hold Swedish nationality.

The Danish security services, PET, estimates that more than 100 Danes have joined the ranks of IS, most of them Arab Muslims but also several Danish converts. “I believe this estimation is low and very conservative,” Allan Sorrenson, a seasoned Danish reporter who has been covering the Middle East for years, told Al-Monitor. “The number is more likely to be 200 or even more, yet the prisoner in Lebanon is the first case of an arrest with links to [IS],” he said.

Magnus Ranstrop, a leading expert on terrorism with the Swedish National Defence College and an author of several books on the subject, agrees that the number is much higher than 100. Ranstrop told Al-Monitor about the features of the Danish foreign fighters recruited by IS. “One feature is that many have a criminal background. In fact, some members even leave crime groups to join extremist [groups]; in this way it becomes an exit strategy from gangs,” he said. According to Ranstrop, there are many reasons for those [men] to join IS: “excitement, a new identity and a new chapter in life, also a sense of discrimination and alienation in Denmark. [Belief in] the Day of Judgement and Jannah [paradise] is also a strong draw.”

It remains unclear whether Ibrahim will be prosecuted any time soon. Yet, a Lebanese security source told Al-Monitor that there is Lebanese-Danish collaboration in the case. “They contacted us because he holds their nationality,” the source said. “But he’s also Lebanese. Therefore, the Lebanese authorities have all the right to try him here.”

In other words, the security source wanted to say that Ibrahim has to wait with hundreds if not thousands of Islamists held without trial at the notorious Roumieh prison, located north of Beirut — a place that has various nicknames, one being the “Islamists’ emirate.”