IS fights for its window to the Mediterranean

As the Islamic State is gaining ground in Homs, which is close to the Lebanese border, the Lebanese army is preparing to counter any attempt to turn north Lebanon into an emirate affiliated with the terrorist organization. 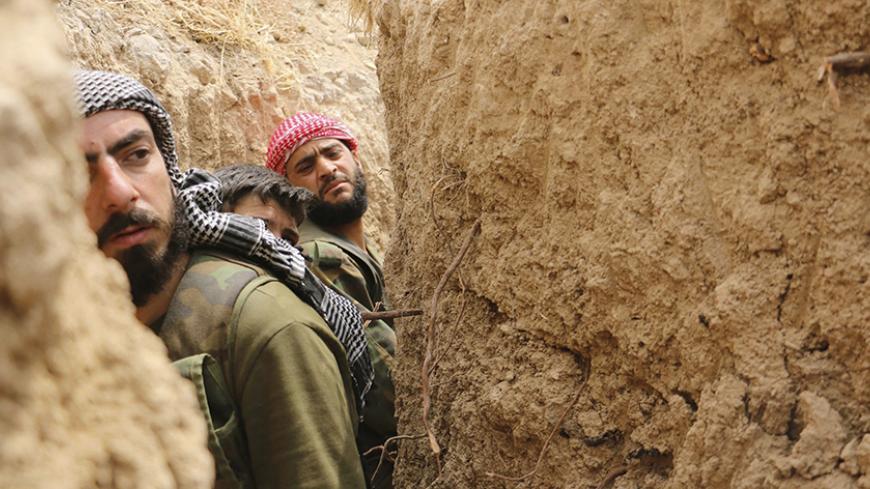 Jaish al-Islam (Army of Islam) rebel fighters walk inside a trench at the Tal-Kurdi frontline in eastern Ghouta area near Damascus, May 10, 2015. - REUTERS/Amer Almohibany

BEIRUT — A great part of the Syrian province of Homs has fallen into the hands of the Islamic State (IS) following the fall of Palmyra. Amid these developments, Lebanon is focusing on Homs. Meanwhile, the Syrian army has been regaining control over the Qalamoun barren lands since May.

Homs is divided into seven districts: Homs, al-Rastan, Palmyra, al-Mukharram, Taldou, Qusair and Talkalakh. Homs, the province’s capital, is Syria’s third city after Damascus and Aleppo in terms of economic and tourist significance. The Homs district lies roughly 50 kilometers (31 miles) from the Lebanese border and is deemed the closest strategic point to the border. Al-Rastan district is under Jabhat al-Nusra militants' control. Palmyra was seized by IS on May 20. The Al-Mukharram district is also being threatened by IS as clashes are ongoing between gunmen and the regime forces. The same applies to the Taldou district. The Qusair and Talkalakh districts both share a border with the northern Lebanese province of Akkar and the Jabal Akroum region.

Although several parts of Syria are plagued by the fighting, the fact remains that IS is focused on Homs province, which is significant for several important factors, Syrian security sources told Al-Monitor on condition of anonymity.

If the terrorist organization wins this battle, it will control Syria’s center. Moreover, Homs is close to Damascus and consequently considered the last step before the major battle in the capital. More important, this province has common borders with Iraq, Jordan, Turkey and Lebanon. Its fall, according to military logic, could mean the return of border villages to IS’ control, which would lead to northern Lebanon. For all these reasons, IS seeking to overthrow Homs again, after the Syrian regime tightened its control over it in the Krak des Chevaliers battle in March 2014, two years after its occupation by militants.

Homs is an extension to the Syrian desert, located in southeast Syria and including eastern Jordan, western Iraq and northern Saudi Arabia. IS controls the Iraqi part of this desert and is looking to control the Syrian part of it — meaning Homs — to link it to the Iraqi land and secure the necessary ground for the establishment of the IS project.

As for geographical, economic and financial factors, Homs is important because it is the closest strategic point to northern Lebanon. Controlling northern Lebanon is an essential goal for IS, being the only outlet to the Mediterranean Sea. IS lacks such an outlet despite its control over vast tracts of Iraq and Syria. This also revives the old and lasting IS project, which consists of turning the Lebanese north into an Islamic emirate with a naval facility, namely the Port of Tripoli, which will serve as IS’ window to the Mediterranean. This has been announced and made clear, as evidenced by several confessions made by detainees interrogated by the Lebanese security forces. Chief among these was detainee Ahmed Mikati, who was arrested in October by the Lebanese army in the Dinnieh neighborhood of north Lebanon for being “one of IS’ most important cadres” in Lebanon.

Controlling the Port of Tripoli, according to the Syrian security sources, will allow IS to export the oil it confiscated after the occupation of several areas of Iraq. It will also provide IS with a key point to import weapons, knowing that the Lebanese north province has been serving as a military extension to the developments in Syria ever since their eruption, as per the sources, who mentioned the Lutfallah II boat incident, which was seized in this port while shipping weapons to the Syrian opposition in 2012.

Also, since the beginning of the Syrian events in 2011, the Lebanese northern border with Syria has been witnessing individual and collective insurgent movements in both directions, in addition to armed clashes in areas such as Wadi Khaled in Lebanon, between the Lebanese and Syrian armies and a number of militants. Also noteworthy is the death of several Lebanese groups of Islamists loyal to IS in ambushes of the Syrian army during that period, most notably the Talkalakh ambush, in which 22 Islamic Lebanese from the north were killed as they headed to fight alongside the Syrian armed opposition in Syria.

IS’ path to the Lebanese north must first pass through the control of Homs, where clashes are ongoing. IS could then control the province and city of Homs and the villages spread over the 50 kilometers (31 miles) that separate Homs from the Lebanese border and that are still under the regime’s control. This will subsequently serve to control the al-Boukayaa crossing, which is one of the most recognized border crossings between Lebanon and Syria and is located in the Wadi Khaled region of Akkar. IS will then be able to access the Lebanese territory, specifically the north.

Several efforts are being made by the Lebanese and Syrian sides to prevent this. The Syrian regime is aware of the importance and aftermath of the Homs Battle. Therefore, it is working to fortify the city through several steps, most notably the advance the regime made in al-Bayarat in June, 10 kilometers (6 miles) from Palmyra. It's also working on holding reconciliations with scattered armed groups in some areas of Homs belonging to the Syrian opposition, and not to terrorist groups. Chief among these areas is the al-Waer neighborhood.

The Lebanese government and army, specifically the north, is aware that the fall of Homs in the hands of armed groups would grant these groups growing influence in Lebanon, reactivate some radical movements in Tripoli, Minieh and Akkar, and awaken sleeper cells in them.

Therefore, the Lebanese army is continuously monitoring the situation in this region, while immediately confronting any attempts targeting the region to pave the way for the declaration of an Islamic emirate. The Lebanese northern areas witnessed a series of tensions over the last year represented by the battles fought by the Lebanese army, most recently with the Islamist Shadi Mawlawi and his followers, in addition to the hunting down of terrorist cells and the arrest of most of them by the Lebanese army.

The sources pointed out the fact that Islamists took to the streets in north Lebanon following the video leaks (June 21-22) of prisoners in Roumieh prison being beaten is an indicator that the north continues to be a fertile ground for several parties who seek to bring about chaos.

In Syria, Homs is getting dual attention from both the Syrian regime and IS. Lebanon is living a duality; it's bracing for the risk of falling down as some groups in the northern villages are ready to pave the way for IS’ entry and the creation of a favorable climate to establish a link between the desired IS and the Mediterranean.