Mankoubin is one of the impoverished neighborhoods of Tripoli, producing youths who have joined such extremist groups as Jabhat al-Nusra and the Islamic State and have carried out attacks in Syria and Iraq, as well as in Lebanon. 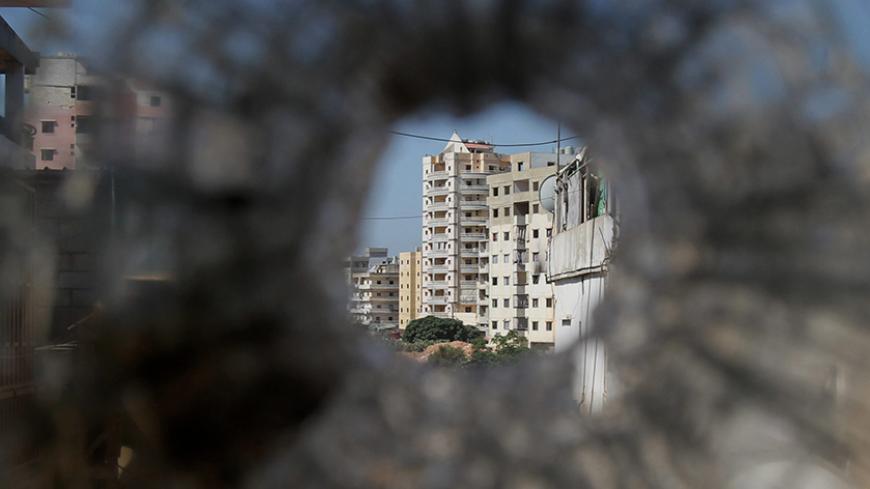 The Alawite neighborhood of Jabal Mohsen is seen through a bullet hole in the window of an apartment in the Sunni Mankoubin district in Lebanon's northern port of Tripoli, following clashes between pro- and anti-Syrian factions in the city, Aug. 25, 2012. - Getty Images/Anwar Amro

TRIPOLI, Lebanon — The Lebanese government initiated a widespread security crackdown in the wake of a twin suicide bombing on Jan. 10 in Tripoli's Jabal Mohsen district, killing nine people and injuring 37 others. Several people have been detained in Mankoubin, the poor neighborhood from which the two bombers hailed that has been at the heart of jihadi activity since the beginning of the Syrian civil war.

One week after the bombing, another Mankoubin resident, Bassam Hussam al-Naboush, was arrested for attempting to carry out terrorist operations against army posts and residential areas alongside a Christian Tripoli resident, Tony Warrak, who had converted to Islam. Since the Syrian uprising, Mankoubin residents, most of whom are Sunnis and appear to support the Syrian revolution, have been at odds with their Alawite neighbors in Jabal Mohsen, who support the regime of President Bashar al-Assad.

Relations between the two communities had taken a turn for the worse after the August 2013 bombings of the Sunni Taqwa and Salam mosques, which were blamed on members of the Arab Democratic Party, the main Alawite movement. With the new wave of arrests, Mankoubin residents have adopted a noticeably lower profile. Pictures of local youth killed in “martyrdom” operations in Syria have been removed from the gray walls lining the area's potholed streets.

“I was shocked when I discovered my son had been involved in the bombing,” said Ghada Khayal, the mother of Taha Samir al-Khayal, who died along with Bilal Mohammed Taha al-Mariyan in the twin suicide attack. “My son was kind and did not have radical ideas. He just vanished more than three months ago, and I did not hear of him until the day of the suicide bombing,” she told al-Monitor. Despite the Khayal family's surprise, the paths taken by the twin suicide bombers seems not to be uncommon in Mankoubin.

“Dozens of men from Mankoubin have gone to fight in Iraq and Syria, and several were involved in suicide attacks,” a Salafist source said on condition of anonymity.

In 2013, Moatassem al-Hassan, a Swedish national of Lebanese origin from the Mankoubin area, blew himself up in a suicide bombing at a military barracks in Kalaat al-Hosn. It was the first time a Lebanese had carried out a suicide attack in Syria since the conflict began in 2011. Hassan was also a relative of Malek and Abdel-Hakim Ibrahim, two young men killed in an ambush in Tal Kalakh, Syria, where they were attempting to join the Syrian rebels. Another family member, Monther al-Hassan, was killed last year during a raid on a terror cell at the Duroy Hotel in Beirut. Hassan was accused of smuggling explosive belts and booby-trapped cars to radical organizations in Lebanon.

“Family ties linking these men to the the Hajj Deeb family, which has a history of terror activity, is one factor that can explain the radicalization of youth in the Mankoubin area,” said the journalist Hazem Amine, an expert on Salafist movements. Syria’s jihadi appeal is also linked to another infamous Mankoubin resident, Khaled Mahmoud, who according to the Salafist source, was a member of the Fatah al-Islam organization, which had confrontations with the Lebanese army in 2007. He said Mahmoud joined the Syrian rebels in the Homs area of Kaleet al-Hosn, where he led the Jund al-Sham organization, a radical group with ideological links to Jabhat al-Nusra and the Islamic State (IS). Mahmoud attracted dozens of youths from Mankoubin to his organization before he was killed in 2014. “Over 100 men from Mankoubin joined Mahmoud,” he said.

Jihadi recruiters have been focusing on Mankoubin and other impoverished neighborhoods of Tripoli for potential suicide bombers. According to the same source, a dozen or so people have been recruited for terror operations, a number that intelligence sources believe to be lower. “About four have been arrested this week,” said an officer in the Lebanese army's intelligence service who spoke on condition of anonymity. The Jabal Mohsen suicide bombers were connected to Shadi Mawlawi and Osama Mansour, two militants linked to the Syrian Jabhat al-Nusra who clashed with the Lebanese army in October 2014.

“Another militant from Mankoubin, Abou Adam, is also suspected to have indoctrinated Khayal and Mariyan,” the army intelligence officer said. Abou Adam is said to have affiliations with the Hassan-Hajj Deeb nexus, which the family denies.

Mankoubin’s association with terrorism is a testament to the radicalization of younger generations of Lebanese Sunnis in Tripoli, exacerbated by Lebanon’s growing Shiite-Sunni rift and the armed anti-government uprising next door in Syria, with which many Lebanese Sunnis identify. Army sources told Al-Monitor that they are worried by the disappearance of some 200 of the city’s youths after Mawlawi and Mansour's clashes with the army last year. According to the Salafi source, "Over 100 of these men have fled to Syria and Iraq, but nearly 80 are still in Lebanon."

That these young men will be used in a new round of attacks is a strong possibility. The city’s marginalized youths are increasingly disconnected from its traditional leaders at a time of rising tensions between Sunnis and Alawites.

“The creation of developmental programs to address poverty in areas such as Mankoubin and the overall city of Tripoli is too little too late. Nothing can stop the mounting wave of extremism now that Lebanon’s fate is linked to regional events that take place in Mosul or Syria,” Amine said. More suicide attacks are to be expected, according to him, and the political and religious vacuum in Tripoli merely serves the interests of radical groups in Syria.