The Islamic State is taking refuge within Lebanon’s borders, where the group appears to be taking advantage of impoverished Lebanese citizens to execute suicide bombings. 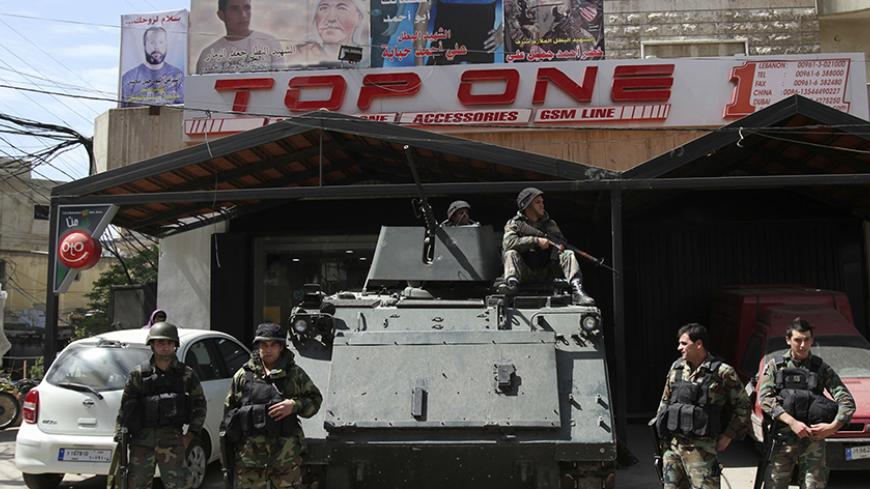 Lebanese soldiers are deployed as part of a new security plan for the city in the Alawite Jabal Mohsen neighborhood in Tripoli, northern Lebanon, April 1, 2014. - REUTERS/Omar Ibrahim

The double suicide bombing that targeted a cafe in the Alawite neighborhood of Jabal Mohsen on Jan. 10 was not an ordinary episode in the series of bombings recently targeting Lebanon’s north and Bekaa Valley region. The importance of this incident lies with those who planned the bombing and the ones who executed it, which indicate that the threat posed by the Islamic State (IS) has appeared on the Lebanese scene.

Could this incident be a prelude to the large-scale military operation that media outlets and officials have been speculating about? Lebanese Interior Minister Nouhad al-Machnouq has spoken of “a new death triangle for IS, stretching from the barren Lebanese lands of Arsal to the Palestinian Ain al-Hilweh refugee camp and Roumieh prison [east of Beirut], reaching Iraq and Raqqa.”

Two young Lebanese men were behind the suicide bombings: Taha Samir al-Khayal and Bilal Mohammed al-Mariyan. Notably, neither of them were known to have partisan or religious affiliations; they were ordinary people, living in poor conditions. Misery was the common denominator between Khayal and Mariyan.

This was the first instance of Lebanese nationals carrying out a suicide bombing using explosive belts. Previously, the Iranian Embassy in Beirut was bombed on Nov. 19, 2013, by a Lebanese suicide bomber who detonated a car bomb.

A security source with ties to the March 14 coalition told Al-Monitor on condition of anonymity, “Rigged cars are no longer an easy option for suicide bombers, especially after the Lebanese army took strict measures to closely monitor the regions on the Lebanese-Syrian border. These areas were used by groups opposing [Syrian President] Bashar al-Assad’s regime and its ally, Hezbollah, to smuggle rigged cars [into Lebanon].”

He noted, “Jabal Mohsen was chosen because it represents the Syrian regime with its Alawite majority, and it is an easy target, unlike Beirut’s southern suburbs, Hezbollah’s stronghold. The latter took tight security measures to secure its region after the series of explosions that occurred between April 2013 and February 2014.”

“What raises concerns is the fact that the Jabal Mohsen suicide bombers used explosive belts,” said the source, adding, “This threatens Lebanon as a whole, making all Lebanese regions easy targets for such operations.”

He shared his concerns about certain neutral regions that have been thus far isolated from the conflict, such as the Christian regions. He fears attacks could begin there either as an attempt to destabilize the Lebanese alliances or in revenge for the incidents that shook Paris and ignited a conflict between Islamist organizations and the West. The source stressed the importance of an internal issue within these organizations: “The overbidding of takfiri leaders to organize or claim responsibility for such operations [and] carrying out suicide bombings outside the borders and in the West generates power and legitimacy for these organizations.”

The biggest surprise came when the interior minister himself revealed that the orders to execute the bombing came from inside a Lebanese prison. He also noted that there have been phone calls between jihadist groups in Syria and Iraq and units affiliated with them in Ain al-Hilweh. This explains Machnouq’s "death triangle" stretching between Raqqa, Iraq, Ain al-Hilweh and Roumieh, as IS seems to be expanding within Lebanon's borders. It suggests that Lebanon not only represents a strategic depth for Hezbollah and Assad’s regime, but also that IS is taking refuge within its borders to escape the international alliance’s airstrikes against it on the eastern front.

It was quite remarkable how strictly Lebanese security forces dealt with the terrorists who had appeared to enjoy a kind of immunity in their Roumieh prison cells. It was also interesting that the moderate Sunni leadership, represented by the Future Movement, supervised the Lebanese security operation and took full responsibility for exposing the terrorist network that crossed the border by declaring war against IS or to eliminate the myth that some Islamists were immune inside Roumieh prison.

There is no doubt that the firmness shown by the moderate Lebanese Sunni leadership against terrorism has received broad acclaim and direct support from Saudi Arabia. The Saudi media covered the Roumieh prison operation extensively, and it led the news in all of the visual and written media in the kingdom.

However, is making the moderate Sunnis confront the extremist Sunnis enough to guarantee Lebanon’s security? Of course not. Solving the security problem is not enough, and the Lebanese terrorists’ backgrounds are proof of that. Terrorism grows under poverty and suppression. Addressing poverty requires economic development and a functional government, while suppression and injustice must be confronted, starting with Hezbollah’s fight alongside Assad in Syria.