Why did Netanyahu confirm Israeli attack in Syria? 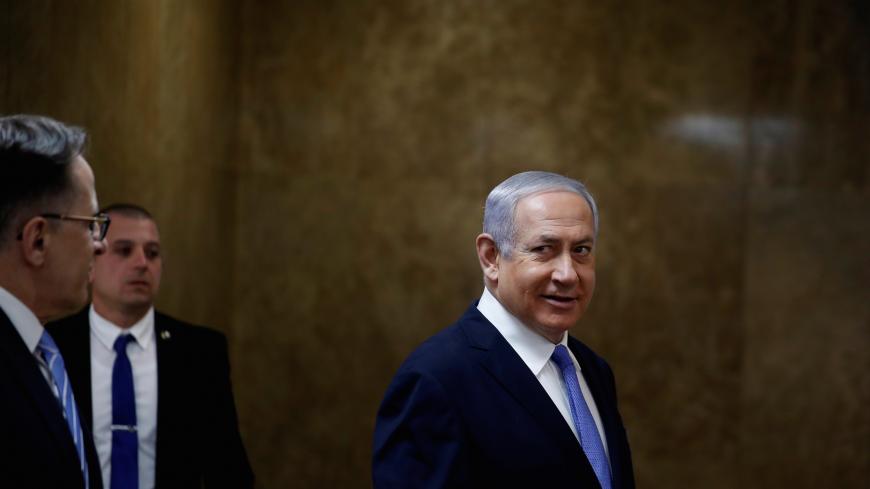 On Feb. 11, Israel Defense Forces (IDF) tanks struck command posts belonging to the Syrian army close to the Israeli border in the Quneitra area. This was an unusual strike. Usually, Israel employs its air force to attack Iranian targets in the Syrian space. This time, due to the short ranges involved, tanks — not planes — fired directly on the Syrian positions, causing damage to the infrastructure and evidently harming the people manning the positions. On the same day, Syria disseminated information about two Iranians who were killed in the attack, but later reports were amended to list the wounded — not dead — victims. According to other reports, Israeli planes also participated in the attack. The IDF refused to comment on this event and returned to its old ambiguity policy that had long since characterized Israeli activity in Syria before the recent swashbuckling and ostentatious policy led by Prime Minister Benjamin Netanyahu.

But the ambiguity policy survived less than 24 hours. On the night of Feb. 13, Netanyahu flew to Poland and, facing cameras in the airport, took responsibility for the assault. He said, “We are operating every day, including yesterday, against Iran and against its attempts to entrench itself in the area. I can tell you unequivocally that the economic pressure is being felt and that we can see the economic crisis affecting also Iran’s attempts against us. We can see cuts of budgets, cuts of forces, withdrawal of forces, and we can see this in all arenas around the world without exception. We see it in Syria, we see it in Lebanon, we see it also in Gaza and we also see it in very important weaponry systems that Iran is struggling to deploy because of, among other things, financial problems, and first of all because of Israel’s active military resistance.’’

Not everyone in the IDF liked this detailed revelation of the prime minister, but since he is also the defense minister, Netanyahu can impose his will on the IDF. Israeli elections will be held in less than two months on April 9, and Netanyahu — who is now challenged by two former chiefs of staff, Benny Gantz and Moshe Ya’alon, both of the Israel Resilience Party — has a vested interest in continuing to develop his image as “Mr. Security.” This image has come under attack in Gantz’s campaign videos, which inflict pressure on Netanyahu’s weak points, including the monthly payments to Hamas that are carried out by Qatar with Israeli support; powerlessness vis-a-vis the Gazan front; and even the disengagement from the Gaza Strip in 2005, which was supported by Netanyahu (then minister at Ariel Sharon’s government) and most of his current ministers. Gantz is using all of these against Netanyahu, and the prime minister sends his answers via IDF activities in Syria. But nothing good can come of this hodgepodge.

The real story is that Israel is continuing its struggle against the growing Iranian-Hezbollah foothold in Syria. Most of this struggle is waged in other fronts such as the Damascus region and other places. But it is also waged in the Syrian Golan, and recently it has intensified. Hezbollah Secretary-General Hassan Nasrallah’s dream with Iranian backup is to open a second front against Israel on the Golan Heights fence.

The IDF has already thwarted two past attempts to establish networks in the Syrian Golan region that would inflict terror on Israel. Now we know that the two allies — Nasrallah and the commander of the Islamic Revolutionary Guard Corps (IRGC), Qassem Suleimani — are far from giving up ship. A secret but fatal front on the Golan Heights would allow Nasrallah to retaliate forcefully against Israel’s attacks in Syria without conceding the strict rules of the game adopted by the sides ever since Israel's second war in Lebanon in 2006. According to these rules, Israel doesn’t attack Lebanon and Hezbollah doesn’t attack Israel from Lebanon. But Hezbollah has been searching for other command posts from which to attack, and the Syrian Golan Heights is a candidate. Should the IRGC and Hezbollah succeed in planting an independent system in the Syrian Golan that is capable of harming Israel, this would be a tremendous achievement for them. But what took place Feb. 11 at 6:30 p.m. shows there is no chance in the world that Israel will allow this plan to come to fruition.

As aforementioned and according to foreign reports, Israel has thwarted similar attempts in the past. One example is the killing of terrorist Samir Kuntar in December 2015. After Kuntar was released from the Israeli prison system, he was immediately recruited to establish a terror network for Hezbollah in the Golan Heights. Even before him, in January 2015, Iranian Gen. Mohammad-Ali Allahdadi was consigned to an early death when he tried to create a war front on the Golan Heights against Israel.

Despite all of this, it seems that Suleimani has not been deterred and continues his efforts to firmly base Iran and Hezbollah in Syria in general and in the Syrian Golan in specific. Some defense sources in Israel commented on Suleimani’s stubbornness. “The Iranians are under heavy pressure, their economy is falling apart and they are being hit hard on the military front. Yet Suleimani doesn’t blink and continues on, full speed ahead. On the professional level, that is certainly estimable,” said a former high-placed Israeli military source to Al-Monitor on condition of anonymity.

The educated guess is that Hezbollah's people have been trying to infiltrate the Golan Heights disguised as Syrian soldiers. Constantly arriving with them are also Suleimani's people — warriors of the Revolutionary Guard. Their goal is to lay foundations for collecting intelligence and terror operations against Israel, which lies to the west.

According to several Syrian news sources this week, the IDF — in its Feb. 11 strikes — also hit a web of sophisticated thermal cameras planted in the area to track Israeli activity. The irony of fate is that one of the sites that was attacked, according to Syrian reports, is an “abandoned hospital.” This is the hospital created by Israel for the benefit of the Syrian residents in the area as part of Operation Good Neighbor in which Israel provided medical aid to wounded victims of the Syrian civil war. Now, according to Israeli fear and concern, this hospital may be turned into a front-line position against the IDF.

All this is happening after Syrian President Bashar al-Assad has consolidated his rulership over the Syrian Golan and remobilized the local population, including the Druze villages, to his regime. Now Israel finds itself facing the same villages it diligently assisted and invested in over several long years. These events are now awakening those elements in Israel who regret losing the historic opportunity to bring down the Assad regime.

“We could have done it relatively easily in the years when Assad vacillated and hung by a thread, but we decided not to,” a former senior Israeli officer told Al-Monitor on condition of anonymity. He added, “Today we are paying the price [for our inaction]. Now we face a Shiite axis that starts from the Persian Gulf and extends all the way to Beirut and to our border fences. What a shame.”