Hamas test-fired missiles toward the sea in the Gaza Strip in a warning to Israel that the calm along the border might not last. 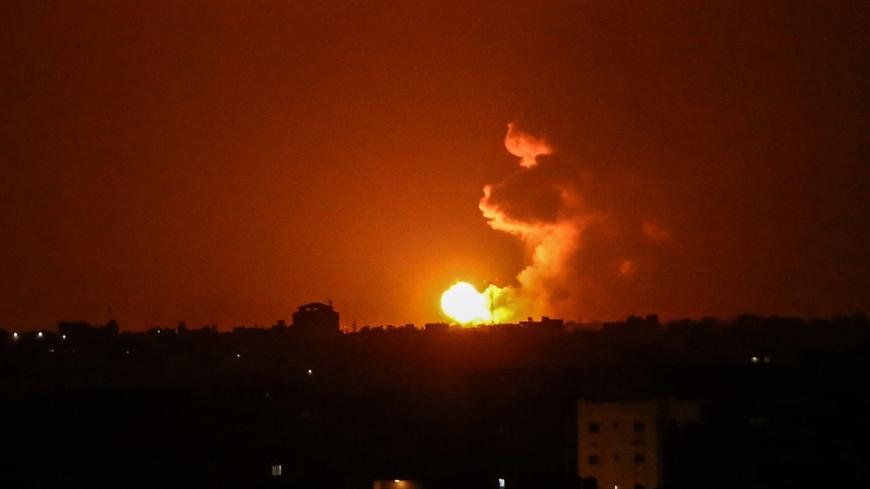 A ball of fire is seen following an Israel airstrike at Khan Yunis in the southern Gaza Strip early on June 27, 2020. Two rockets were fired from Hamas-controlled Gaza toward Israeli territory on June 26, the army said. It was the first reported rocket fire from the Gaza Strip since early May. - SAID KHATIB/AFP via Getty Images

Many Palestinian and Israeli pundits considered the missile launching as a warning to Israel that Hamas is heading for a military confrontation should the Israeli blockade on Gaza remain in place, as Hamas claims that Israel is failing to uphold truce understandings reached in October 2018.

Prior to firing rockets, dozens of incendiary and explosive balloons were launched from the Gaza Strip toward southern Israel, causing the outbreak of 30 fires in Israeli agricultural fields Aug. 10. This prompted Israeli Defense Minister Benny Gantz to punish Gazans by partially shutting down the Kerem Shalom commercial border crossing in southern Gaza, and prevent the entry of building material into the enclave.

The uptick in violence between Israel and Hamas comes at a time that the Qatari monthly financial assistance distributed to Gaza will cease by early September.

The Palestinian daily Al-Quds reported Aug. 10 that the head of Hamas’ political bureau, Ismail Haniyeh, was currently in Doha in a bid to renew the Qatari grant, which amounted to $150 million for a period of six months and was offered by the Qatari emir in March.

A Hamas official told Al-Monitor on condition of anonymity that Hamas had recently informed the Egyptian mediator as well as the Qatari one that the state of calm with Israel would come to an end as the latter has failed to abide by the truce understandings, including permitting the implementation of large projects in the Gaza Strip, namely with regard to the electricity and water sectors and the temporary employment for the unemployed and recent graduates, and with regard to the industrial zone, east of Gaza City.

The official noted that the relaunching of incendiary balloons and test-firing of rockets are clear field messages that Israel must heed before the situation explodes in the Gaza Strip, in light of the extremely dire economic situation and the ongoing Israeli blockade. He noted that mediators have assured Hamas that they will take action to pressure Israel to adhere to the understandings for fear that the situation would blow up in Gaza.

He added that the contacts that have been made so far yielded little to nothing, including with regard to the renewal of the Qatari financial grant, stressing that Hamas is serious in its threats should no real and immediate progress be made in implementing the truce understandings.

This was not the first time that Hamas test-fires rockets to send military messages to Israel. In early July, Hamas launched 24 rockets with different ranges toward the sea, the biggest missile test, in a message threatening Israel about the annexation plan of the West Bank.

Daoud Shehab, head of the Islamic Jihad media office, said in a press statement Aug. 11, “The blockade is not our destiny and we will not allow the blockade to become Gaza’s reality. The whole world must realize that the Palestinian people can turn the tables on blockage and aggression plots.”

The Israeli Walla news website quoted Aug. 11 a senior Israeli security official as saying that Israeli Prime Minister Benjamin Netanyahu and Gantz discussed the escalation with Hamas and following the meeting, Israel sent messages to Hamas via mediators that it is working on promoting the humanitarian projects needed in Gaza.

The report said that Israel might take some time to deliver on its promises because of the coronavirus repercussions, which make it difficult to meet with officials from other countries.

“Hamas must understand that this is not a deliberate act on the part of Israel, but the product of reality,” the military official said.

Noam Amir, military correspondent for the Israeli Makor Rishon newspaper, shared a tweet Aug. 11, saying, “Usually every launch marks the end of production of a series of missiles but in my humble opinion, this time the missiles fired into the sea are a message to Israel that Hamas is ready for a confrontation and has already filled its [rocket] warehouses.”

The escalation between Hamas and Israel affected the Israeli border towns with Gaza, where the daily incendiary balloons land. On Aug. 10, the heads of local councils in these towns urged the Israeli government to put aside political disputes and direct a harsh response against the factions in the Gaza Strip.

Retired Palestinian Maj. Gen. Yusef al-Sharaqawi told Al-Monitor that, through the test-firing of missiles, Hamas is trying to send a message to Israel that it will not hesitate to use its military strength should the Israeli government fail to adhere to the truce understandings.

Meanwhile, Rami Abu Zubaydah, researcher on military and security affairs, said the firing was meant to show that Hamas’ decision to break the siege was not “merely media hype,” and that the ongoing economic pressure facing Gaza could put an end to the state of calm.

The tense situation between Israel and Hamas continues to cast a shadow over both sides of the border, amid expectations of further escalation in the coming days as mediators have yet to take action and Netanyahu’s threat to the Palestinian factions that they will pay dearly.