Islamic Jihad is considering joining a Hamas-led administrative committee in Gaza, as it breaks its silence in a bid to resolve the Hamas-Fatah feud that's crippling the Gaza Strip. 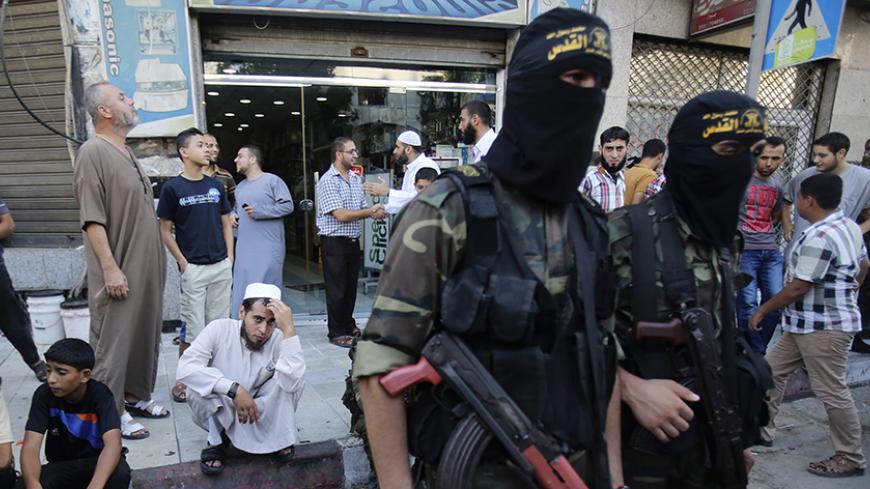 People look on as Islamic Jihad militants participate in a rally celebrating what they say was a victory over Israel following a cease-fire in Gaza City, Aug. 29, 2014. - REUTERS/Ibraheem Abu Mustafa

GAZA CITY, Gaza Strip — Palestinian Islamic Jihad has ended its silence on the escalating feud between Hamas and Fatah and is trying to position itself as a mediator to end the dispute that is delaying Gaza’s reconstruction after last summer’s devastating war with Israel.

Islamic Jihad is considering a Hamas proposal for an administrative committee to be formed in the Gaza Strip. Leaked minutes of a Jan. 11 meeting between Hamas deputy leader Mousa Abu Marzouk and other Palestinian factions, with the exception of Fatah, circulated in local media. During the meeting, Hamas suggested forming an administration committee to support the consensus government and implement the reconciliation agreement. According to the reports, leftist factions rejected the idea of the committee, while Islamic Jihad has been more open to the idea.

Islamic Jihad’s leadership initially showed hesitation toward the committee proposed by Hamas. But based on Al-Monitor’s interviews, this hesitation is starting to turn into a consensus, especially since several recent meetings were held between Hamas, Islamic Jihad and other factions. These meetings, which were not made public, focused on the electricity crisis and the failure of the Ramallah government to meet Gaza’s demands, according to information obtained by Al-Monitor from an Islamic Jihad source.

Sheikh Nafez Azzam, an Islamic Jihad's political bureau member who was present at the meeting with Abu Marzouk, told Al-Monitor that they are now in the midst of consultation on the committee's powers and role, as well as points of convergence and divergence with the government. Azzam stressed the importance of extreme honesty during these meetings as the best solution to all pending Palestinian issues.

Islamic Jihad remains opposed, however, to supplanting the unity government with a committee in the Gaza Strip. “The consensus government must be given time on the ground. Such committees will lead to an overlapping of missions,” he said.

Islamic Jihad issued a statement on Jan. 4 in which the group broke its silence on the row between Hamas and Fatah and the mismanagement of the Gaza Strip, sharply criticizing what it called “the policy of perpetuating the blockade.”

“We must tackle the problems of transparency within the Gaza Strip. There are many crises experienced by the people, which are caused by political bickering that increases their suffering,” he added.

Islamic Jihad is not in the game of questioning any Palestinian faction’s patriotism, Azzam said, but stressed that the bickering between Fatah and Hamas is causing a lot of suffering. “Islamic Jihad is trying to create a balance, reflect the people’s demands and deploy all efforts to solve the internal dilemmas,” Azzam said.

Observers told Al-Monitor that Islamic Jihad’s half-hearted response to Hamas’ formation of the committee stems from its historical "yes, but" position. Islamic Jihad is seeking, at the same time, not to alienate Fatah. In fact, it is known for its balanced positions on internal Palestinian affairs.

Political analyst Atef Abu Seif told Al-Monitor that Islamic Jihad, in principle, cannot take a hostile stance toward Hamas, as it feels Hamas is closer to it than any other Palestinian party.

He added that Islamic Jihad may see the committee as a means to mediate or bridge the gap between Fatah and Hamas, but that the group will not give its full approval for the formation of such a committee unless it is part of a national agreement.

Abu Seif believes the limitations to Islamic Jihad’s political involvement stem from its ideology and organizational structure, which does not tackle the mechanisms of governance. Islamic Jihad is primarily a resistance movement, not a popular political party, and it does not participate in elections and maintains a distance from the public eye. However, Islamic Jihad’s willingness to join an administrative committee in Gaza might be considered a re-evaluation of its policies.

“I do not think there are current profound reconsiderations within Islamic Jihad, and its approval of the committee perhaps is part of a tactic to end the dispute between the parties, and even its criticism of Hamas in the statement is part of an attempt to put pressure on Hamas not to escalate its tone toward Fatah,” Abu Seif said.

The growing crisis in Gaza has prompted a shift from Islamic Jihad to focus on resolving the Palestinian feud between Hamas and Fatah.

Khaled al-Batsh, a Islamic Jihad leader, told Al-Monitor, “The priority of Islamic Jihad is resisting occupation and liberating the country, but in light of the current crisis in Gaza the priority has become the implementation of the Cairo reconciliation agreement. We do not need new interpretations, but an implementation of the agreement to reach partnership with the PLO and formulate a national project.”

Batsh confirmed that the suggestion of an administration committee does not affect the unity government, adding that in light of the nonimplementation of the bilateral agreements signed by Fatah and Hamas, a committee is required to oversee their fast implementation and not to overthrow the government.

He stressed that the committee's functions include the implementation of the Cairo agreement of 2011 to avoid deadlock. “This committee has yet to be formed and we need to consult with Fatah,” he said.

Abu Seif believes Hamas may turn this committee into a committee to manage the affairs of the Gaza Strip, prompting caution from other factions. “This is why the rest of the factions opposed it, while Hamas proceeded with its formation and proposed the membership of some well-known national figures,” he said.

Abu Seif fears the committee will turn into a bloodless coup against the current government and take hold of the management of Gaza.

For his part, Ghazi Hamad, a senior Hamas leader and undersecretary of the Foreign Ministry in Gaza, denied that the formation of the administration committee implies a coup in Gaza. He stated that the meeting discussed the formation of committees to follow up on three key issues: electricity, the government and reconciliation. He added that the committee is not an alternative to the government, but rather a support, to achieve the services entrusted to it.

“Hamas does not seek to stage a coup against the government, but has a strong conviction that this government must succeed and perform its role, since it showed failure and a slowdown in handling the Gaza Strip’s issues, particularly sensitive issues such as security and salaries,” Hamad told Al-Monitor.

They say the devil is in the details. The coming weeks will reveal whether this administrative committee will see the light. Only then will Islamic Jihad clearly delineate its position concerning the escalating dispute between Hamas and Fatah. It will decide whether it will keep playing the mediator role and interfering in Gaza’s affairs through this committee, or whether it will stay out of it and focus on its resistance activities.