An expanded government in Gaza won't solve Hamas' problems and end its isolation. 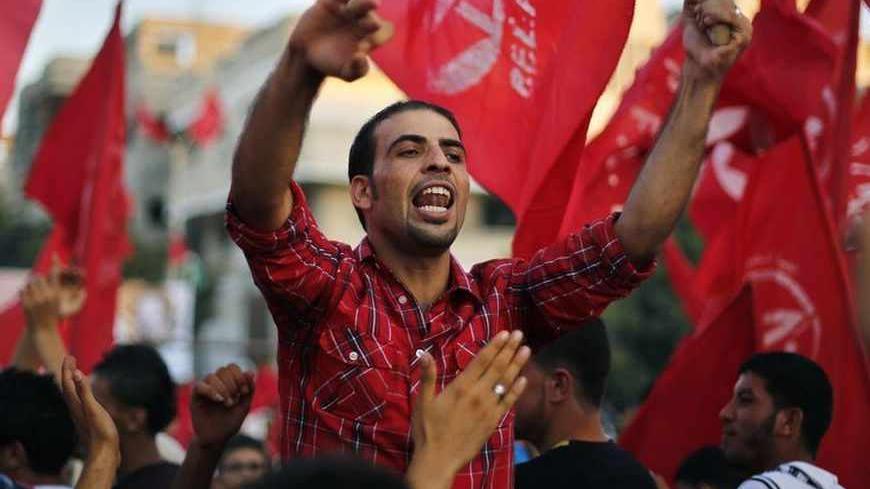 A Palestinian shouts slogans during a rally marking the 12th anniversary of the killing of Abu Ali Mustafa, leader of the Popular Front for the Liberation of Palestine (PFLP), in Gaza City, Aug. 27, 2013. Abu Mustafa was killed in an Israeli missile attack in Ramallah in 2001. - REUTERS/Suhaib Salem

GAZA CITY, Gaza Strip — Palestinian factions were reluctant to accept a call by the Hamas-led Gaza government to participate in administering the Gaza Strip. The call was issued by Prime Minister Ismail Haniyeh during a speech he gave at the opening of the National Program for the Performance Indicators of Charities and Civic Bodies in Gaza City on Wednesday, Aug. 21.

The Popular Front for the Liberation of Palestine (PFLP) initially welcomed this invitation; it soon amended its stance by adding that the “invitation required a political framework,” which government spokesman Ihab al-Ghossein described to Al-Monitor as “backtracking on its position.”

Islamic Jihad, on the other hand, announced that it was studying the matter. One of its leading figures, Khaled al-Batsh, affirmed to Al-Monitor that until now the invitation did not go beyond media statements, and that they had not yet received any official word about participating in the administration of Gaza. “We refuse to participate in any new government in the absence of national reconciliation and the restructuring of the Palestinian Liberation Organization, as stipulated by the Cairo Agreement of May 2011.”

During the speech, Haniyeh had called for expanded participation in the administration of the Gaza Strip until reconciliation was achieved and a national unity government formed, telling reporters: “Our call for expanded participation and the shouldering of responsibilities is engendered by our hopeful glance towards the future, and not by any anticipation of things to come,” in an allusion to the fall of the Brotherhood’s rule in Egypt.

During an interview with Al-Monitor at his office, Ghossein affirmed that the call was serious. “It came following an internal governmental decision in favor of the unity and collaboration approach,” he said. Ghossein stressed that partnership and collaboration would be as wide open as the factions deemed necessary.

“This partnership will cover all aspects; from service and administration, to militant action and governance. It will include national figures and won’t only be confined to factions,” Ghossein stated. He affirmed that the call was not a substitute to any reconciliation agreement, but came to serve national interests.

“There aren’t any further details at this time, but meetings will be held in the coming days with each party separately and then collectively,” he added. The government spokesman affirmed that the invitation was not a new one, but had previously been presented in 2006, 2007, 2009 and after the last war with Israel in November 2012.

Ghossein criticized what he called the backtracking witnessed in both the PFLP and the Democratic Front for the Liberation of Palestine’s (DFLP) positions, saying, “At the beginning they welcomed it, but then backtracked. I hope that these factions’ decisions were theirs alone, and not the result of any pressure.”

Al-Monitor learned from a source who wished to remain anonymous that Haniyeh’s call was discussed last week when the PFLP, DFLP, Islamic Jihad and Hamas met to consider the mechanisms by which to reject the peace negotiations underway between the Palestinian Authority and Israel. The source clarified that the factions’ reaction to the initiative led Hamas to believe that they welcomed and approved it.

Rabah Mhanna, who is a member of the PFLP politburo, was the first to welcome the initiative. He told Al-Monitor during an interview conducted in his office, “Hamas distorted our welcoming stance while Fatah exploited it and over exaggerated its impact, despite the fact that, from the onset, it aimed to welcome a step considered to be an avenue towards reaching a reconciliation agreement and the holding of municipal, student and trade union elections.”

“But, so far, we have not received any official invitation to discuss the mechanisms associated with the implementation of this partnership. This leads us to believe that the invitation was nothing but chatter meant to encourage participation under Hamas’ wing, in a move similar to the one adopted by [PA President] Mahmoud Abbas’ government on the West Bank,” he added.

Jamil al-Majdalawi, a deputy representing the PFLP in Gaza’s Legislative Council, told Al-Monitor, “I do not think that any of the political powers will accept becoming a partner in Hamas’ government because any such move would consecrate the existing [political] division. Yet, it is our duty to help Hamas in light of what some consider to be the difficulties it currently faces. Opposition means searching for positive alternatives while refraining from seeking revenge or excluding others. For no one can deny that Hamas, as an electoral power, represents no less than 25% of voters.”

In a stance similar to that of Majdalawi, Faisal Abu Shahla, a Gaza-based Fatah figure, rejected the invitation to an expanded government, calling it a “diversion away from reconciliation, and consecrates divisions.”

“Our opinion is that the solution to the Gaza crisis rests in Fatah’s still-open offer to conduct elections on all levels, be they legislative, presidential or municipal. Abbas is also ready to issue two decrees: one calling for the formation of a government, and the other for the holding of elections,” he told Al-Monitor.

The Palestine Liberation Front, the Popular Struggle Front, the Palestine People’s Party and the National Initiative Party had announced, from the West Bank, their rejection of Haniyeh’s invitation, describing it as a consecration of Palestinian division along national lines, and a maneuver to escape the regional crisis faced by the Muslim Brotherhood.

In the same context, Islamic Jihad’s Batsh said that his movement will not respond to any invitations through the media, and “will wait to receive concrete proposals and written documents.”

Political analyst Mukhaymar Abu Saada opined that the reasons behind Hamas’ invitation are related to the political isolation that has befallen it as a result of its relationship with Iran, Syria and Hezbollah reaching a dead end, as well as the fall of the Brotherhood’s regime in Egypt. It also is suffering from a stifling financial crisis, and feels that reconciliation and elections will cease to be feasible, especially after the start of negotiations with Israel on the West Bank.

During a telephone interview with Al-Monitor, Abu Saada hosed down prospects of Hamas’ invitation to expand government succeeding.

“Hamas will not succeed in expanding Gaza’s governing structure, despite the Islamic Jihad and PFLP’s welcoming of the move, for their participation in the government will not resolve the Rafah border crossing problem nor the prevailing lack of money. Alleviating Hamas’ isolation rests with President Abbas, and requires that Hamas partner itself with Fatah.”