Hamas and Islamic Jihad have criticized Rami Hamdallah's appointment as the new Palestinian prime minister, while leftist groups have vowed to boycott the new cabinet. 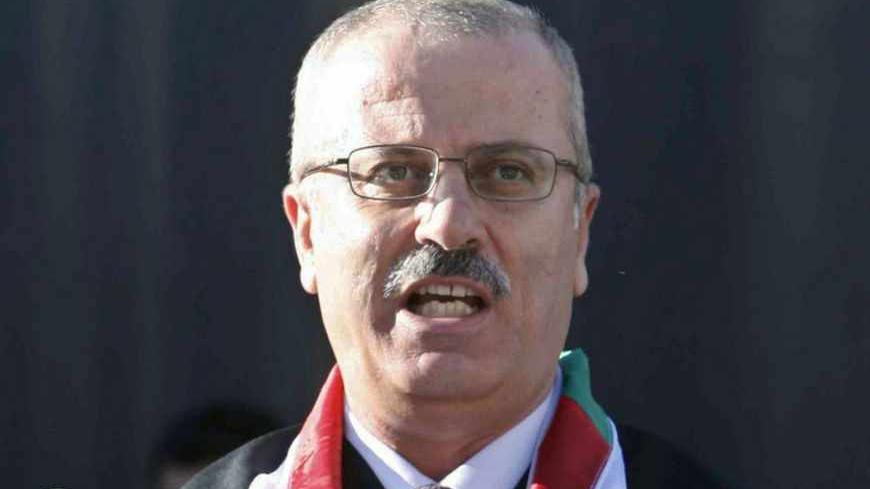 Rami Hamdallah, president of An-Najah University, speaks during a graduation ceremony at the university in the West Bank city of Nablus, June 16, 2011. - REUTERS/Abed Omar Qusini

The appointment of 54-year-old Rami Hamdallah as the new Palestinian Authority Prime Minister has drawn a sharp response from Gaza factions, least of all Hamas.

President Mahmoud Abbas selected Hamdallah, the chairman of An-Najah University in the West Bank, six weeks following the resignation of Salam Fayyad after a bitter dispute with Abbas.

The new government is not expected to have any major replacements, with only the addition of two deputies: one from Gaza and the other from the West Bank.

The "new government proves that the Fatah leadership is willing to maintain and prolong the state of disagreement," Hamas said in a statement on Wednesday.

But according to Ramallah-based Fatah spokesman Ahmad Assaf, the appointment of Hamdallah was a must in such circumstances where the prime minister’s chair was vacant.

“With Fayyad’s resignation while the reconciliation talks are still in process, we had no alternative but assigning a new prime minister to take care of administrational issues,” Assaf told Al-Monitor by phone.

Adding weight to the appointment, political analyst and lecturer at Gaza’s Al-Azhar University Mukhaymar Abu Saada said that assigning Hamdallah was urgent and understood in the current context.

Abu Saada believes Hamdallah’s cabinet will be a caretaker government that probably won’t have a political agenda.

“The political issues are the PLO’s business, as it is the authority usually addressed by the regional and international community,” he told Al-Monitor.

Despite Hamas’ official harsh response to Hamdallah's appointment, its moderate lawmaker Yahya Moussa called for cooperation with Hamdallah’s government and persistence to unite the Palestinians.

“Strategic goals should not be broken down for transitional and tactical decisions. If the new government deals with a unitive policy, we can get over the division,” Moussa told Al-Monitor, stressing it was his personal view.

Islamic Jihad assumed a similar stance to Hamas, arguing that forming a new government at this time would slow down the reconciliation process.

"The agreement between Fatah and Hamas to have a unity government was already reached, so why the delay?" Habib said.

While his faction is part of the ongoing split between Hamas and Fatah, Habib said ending the division is a main issue for Islamic Jihad.

"We can't isolate ourselves from the Palestinian people and its needs. Ending the division is our goal, just like the rest of the Palestinians," he explained.

Leftist groups in Gaza also joined the chorus of criticism toward the new government, with the PFLP and DFLP both announcing their refusal to participate with Hamdallah.

"We were part of Fayyad’s government as a transitional government waiting for a  unity cabinet to be formed. But continuing to form caretaker governments is neither in the national interest nor will it help push the reconciliation forward,"  Ramzi Rabah, a senior member of the DFLP’s political bureau, told Al-Monitor.

The PFLP echoed the disappointment that a unity government has again been stalled, with PFLP official Jamil Mezher saying that its delay is unjustified. "I don't blame only Fatah for procrastinating, Hamas is also participating in this by continuing to take unilateral decisions," Mezher told Al-Monitor.

Mezher said that his faction has nothing against Hamdallah personally, rather it is against the constant changing of governments in Ramallah with nothing new to present.

"It doesn’t matter to me who the prime minister is, what matters is creating a new system that will help the Palestinians to get a higher level of life, which is not happening," Mezher said.

Abu Saada argued that due to his low international profile, Hamdallah’s two deputies will help him cope with the many challenges facing him.

"He is not very politically experienced, but having two deputies is important for him to carry out his responsibilities.”

Abeer Ayyoub is a contributor to Al-Monitor's Palestine Pulse. She graduated from the Islamic University of Gaza with a BA in English literature. She is a former human rights researcher turned journalist whose work has also appeared in Al Masry Al-Youm, Al Jazeera and Haaretz. On Twitter: @Abeerayyoub.