In an unprecedented move in Palestinian politics, the PFLP's leadership has resigned to pave the way for younger activists to rejuvenate the party. 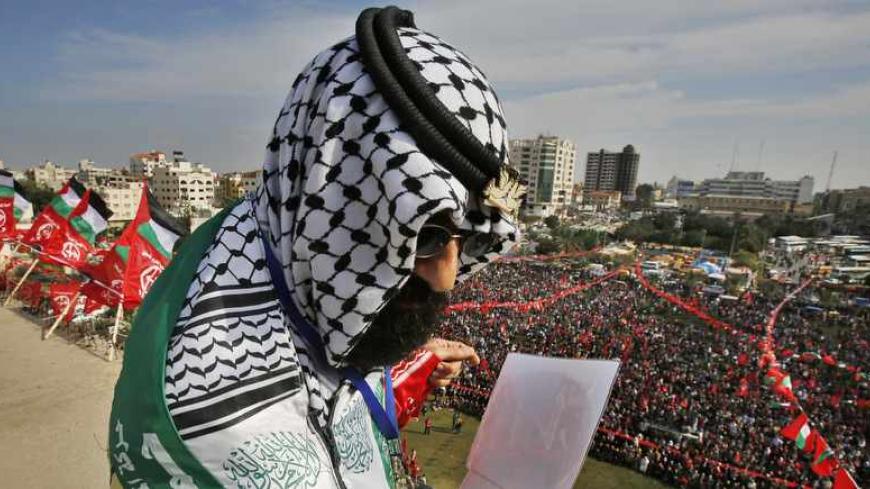 A Palestinian watches a rally marking the 46th anniversary of the founding of the Popular Front for the Liberation of Palestine (PFLP), in Gaza City, Dec. 7, 2013. - REUTERS/Suhaib Salem

GAZA CITY, Gaza Strip — The Popular Front for the Liberation of Palestine (PFLP) celebrated its 46th anniversary on Dec. 7 in one of Gaza City’s largest arenas, where, in an unprecedented move in the history of Palestinian factions, it announced that members of its old-guard leadership were relinquishing their posts to give new generations the opportunity to assume leadership roles. According to a statement released by the PFLP that day, this decision was taken “so that democracy may be safeguarded and renewal guaranteed, thus ensuring that the Front and the revolution be maintained and protected from aging, calcification and bureaucracy.”

Despite the PFLP’s announcement, some of its leaders, with whom Al-Monitor met, attributed the Front’s decline in the post-1970s years to factors other than the aging of its leadership. They noted that management changes would not include all older leaders, but a group of them located in the West Bank, Gaza Strip and abroad.

Sources inside the PFLP, who wished to remain anonymous, explained to Al-Monitor that the organization’s Rules of Procedure required that the tenure of its politburo members not exceed two terms of five years each, or a total of 10 years. This time limit was surpassed because of the three-year delay in convening the organization’s seventh General Assembly, as a result of the instability in Syria where its leadership abroad resides, in addition to internal Palestinian divisions.

The Front has faced difficulties since the inception of the Palestinian Authority in 1994, when its influence and popularity slowly began to dwindle as it failed to make any electoral breakthroughs in the second general elections that gave Islamist Hamas an overwhelming majority. It also failed to take advantage of the divisions seen in Palestinian territories and to recover some of its lost influence at the expense of the reduced popularity of the two main forces on the scene, namely Fatah and Hamas. As Daoud Kuttab wrote for Al-Monitor on Dec. 10, the PFLP has struggled to become a prominent opposition voice in Palestinian politics.

Jamil al-Majdalawi, a leading figure in the PFLP and one of the people who relinquished their posts, attributed the Front’s failure to restore its influence on Fatah and Hamas’ ability to appoint whomever they desired to public jobs, thus guaranteeing the loyalty of some of the populace.

Majdalawi, who is a member of the Palestinian Legislative Council, spoke to Al-Monitor in his office in Gaza City. “The Left no longer is able to make any breakthroughs among the Palestinian people, because of the multitude of leftist factions, and the lack of a credible explanation for this multiplicity. Furthermore, leftist ideology cannot adequately stand up to religious dogma, which seems to be prevalent in Palestinian society,” he said.

He explained that the PFLP did not possess the required political pragmatism found in both Hamas and Fatah. “We lack the necessary pragmatism because the PFLP’s historical political aspirations never included the attainment of office, and focused more on developing a proper political program instead of possessing the tools needed to make it a reality.”

Leftist political author Talal Awkal said the PFLP failed to provide a “third option” throughout the years of internal Palestinian divisions. He said that the Front was unable to “fill the void that the infighting left among the populace.”

Speaking to Al-Monitor, Awkal said the front “was incapable of putting an end to the [political] divisions, and did not minimize the risks and negative repercussions of those divisions upon Palestinian society. This is particularly true in the areas of civic liberties, and the abuse of human rights by the Gaza and Ramallah governments.”

The PFLP, which was established in 1967 as an extension of the Palestinian branch of the Arab Nationalist Movement, is considered the second-largest faction of the Palestine Liberation Organization (PLO). It mutated from being a Marxist-Leninist organization — in the Soviet sense of the term — during the early years after its founding, to currently become merely guided by the aforementioned ideals.

The same PFLP sources pointed out that the seventh General Assembly, which was held recently in November, was composed of approximately 600 members, the majority of whom hailed from the West Bank, Gaza and abroad. This was in addition to 20 members imprisoned in Israeli jails. The Assembly elected members of the organization’s Central Committee, most of whom are considered “hawks.” The Central Committee, in turn, in about a month will elect the members of the General Political Bureau, whose members have increased from 16 to 19.

These sources attributed the weakness of the PFLP in the past years to “the pathological condition that prevailed organizationally and ideologically, which prevented the movement from entering into alliances and forming relations able to give rise to a third option on the Palestinian scene. This was a result of the Palestinian Authority’s great influence on a number of the leftist organization’s leaders, and the attempts to bring that organization closer to the PA’s political ideals. These ideals are predicated on the two-state solution as a basis to end the Palestinian-Israeli conflict, something the Front ideologically rejects.”

Young PFLP activist Arafat al-Hajj believes that, at the current stage, the Front is not taking any initiative. "The PFLP must take initiative to regain its strength and enhance its capabilities in the armed struggle against the Israeli occupation. This will allow it to have an active presence in international Palestinian issues concerning social justice and freedom," he told Al-Monitor.

The sources also pointed out that the PFLP has around 12,000 officially registered members, 10,000 of whom are located in the West Bank and Gaza Strip. This is in addition to 2,000 spread among the diaspora in Syria and Lebanon.

The PFLP, the military wing of which carried out hundreds of operations against Israeli targets, most notably the hijacking of airplanes abroad during the 1970s, is entering a new era of its political history with this seventh electoral round. As it enters this new stage, new faces might emerge to keep hope alive among its members and supporters that real and serious efforts will be undertaken to break the stalemate that prevails on the Palestinian political arena, as the rival Fatah and Hamas movements continue to control all internal and external Palestinian decisions.