Hamas’ meeting with the UN envoy in Gaza ended on a sour note, portending further escalation with Israel. 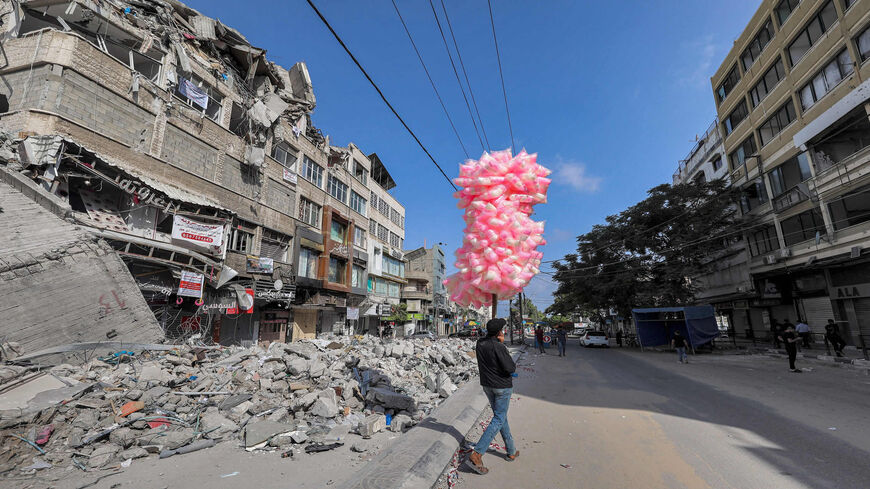 A Palestinian pedlar walks with bags of cotton candy past the rubble of a building destroyed during the May 2021 conflict between Hamas and Israel in al-Rimal neighborhood, Gaza City, Gaza Strip, June 10, 2021. - Mohammed Abed/AFP via Getty Images

GAZA CITY, Gaza Strip — Israel eased some economic restrictions imposed on the Gaza Strip on June 20, for the first time since the round of violence with the Palestinian factions came to an end on May 21. There are, however, some indicators that things might head toward reescalation — not militarily but through popular movements.

In a June 20 press statement, the Palestinian Authority’s (PA) General Authority for Civil Affairs in Gaza announced that Israel allowed Palestinians that were stuck in Jordan to return home through the Erez crossing. It also allowed the resumption of incoming and outgoing mail to the Gaza Strip, the export of agricultural crops and sewing factory products. This comes after a ban that entered into effect on May 11.

The head of the authority, Hussein al-Sheikh, said in the same statement, “We hope that easing some restrictions will be a prelude to completely lifting the blockade on our people in the southern governorates [Gaza].”

On June 22, Hamas met with Tor Wennesland, the UN special coordinator for the Middle East peace process, and his delegation in Gaza City, in a bid to advance the UN efforts to stabilize the cease-fire and alleviate the siege on Gaza. The meeting, however, ended on a bad note, with tension arising again.

Yahya al-Sinwar, head of Hamas in the Gaza Strip, said that the meeting with the UN was negative, warning Israel against the “consequences of keeping the siege on the coastal enclave in place and blackmailing the resistance and the Palestinian people.”

Hamas’ leadership issued a statement on the heels of a meeting that was held between the movement’s leaders and the Palestinian factions and forces in Sinwar’s office in Gaza on June 22, warning Israel against “slow measures in lifting the blockade and failing to commit to the understandings that were previously agreed upon, and halting the reconstruction process.”

Hamas stressed that “the resistance will never be silent, and the enemy will see that we are ready for all options. We will resist by all popular and other means.

The statement continued, “We will exchange prisoners for prisoners only. The enemy will witness misery like never before. Our people are up for the challenge and to impose new equations.”

Hamas also denounced what it called “the UN’s connivance with the Israeli occupation, as Israel has yet to be included on the international list of disgrace.”

The meeting of the Palestinian factions was held upon the request of Hamas to brief the factions on the movement’s meeting with the UN envoy, according to Jihad al-Batsh, a leader of the Islamic Jihad movement in Gaza.

“The UN meeting with Hamas was aimed at testing the water among the Palestinian factions and to end the special understandings on facilitating life in Gaza. They [Israelis] want the reconstruction process in Gaza to be conditioned upon the release of Israeli prisoners, which is a totally separate matter,” Batsh told Al-Monitor.

“We condemn the UN bias toward Israel, as it refused to include the Israeli army on the blacklist of war crimes,” he added.

Hamas spokesman Abd al-Taif al-Qanou told Al-Monitor, “We cannot allow any delay in the reconstruction issue. We will not stand idly by. Options are open to us to pressure the occupation forces to completely lift the siege on the Gaza Strip.”

Commenting on the mediation efforts, Qanou said, “Hamas gave a chance to the international, Egyptian and Qatari efforts to mediate. But what was offered during the meeting with the UN delegation was not up to the required level amid the suffocating siege. The international community has failed to bear responsibilities and to hold the occupation accountable, which would cause the situation in Gaza to explode, especially amid the renewed Israeli violations in Jerusalem and Nablus. The occupation forces will pay a dear price for this.”

He added, “The blockade issue should be dealt with within the framework of efforts to lift the siege. The reconstruction means the start of the process. But the issue of prisoners is a different issue. Israelis are trying to link the prisoner exchange deal with humanitarian issues, which is unacceptable.”

On May 21, Israeli Defense Minister Benny Gantz threatened not to allow the reconstruction of Gaza should Hamas not return the missing Israelis and Israeli soldiers detained in Gaza.

On the same day, well-informed Egyptian sources told Asharq TV that the Egyptian mediators decided to put on hold the prisoner exchange issue, after two days of negotiations between Hamas and Israel.

Islamic Jihad spokesman Tariq Salmi told Al-Monitor, “The resistance has many options, most importantly popular resistance. The launching of incendiary balloons toward Israel will resume and the night confusion units will also resume their activities in addition to other actions.”

In a press statement that Al-Monitor secured a copy of, the spokesman for the Popular Resistance Committees, Mohammad al-Breim, said, “We will not accept the policy of shuffling the cards and of having other issues overlap with the captured soldiers issue.”

He said, “The occupation force is undermining the cease-fire and our resistance is ready for confrontation throughout the nation."

Hassan Abdo, a political analyst close to Islamic Jihad in Gaza, believes that regional and international powers seek to undermine Hamas' achievements in the last round of violence and deny it any political gains, by pressuring it with delaying the reconstruction process, continuing the blockade and imposing a prisoner exchange deal.

Abdo told Al-Monitor, “The intransigence of Naftali Bennett’s government hinders any chance to reach an understanding with Hamas.”

He noted, “The statements issued by the factions clearly suggest that they do not want to escalate but give mediators the opportunity to discuss the required conditions in more depth. The failure of talks could lead to escalation, albeit limited, or things may explode into a larger scale war.”

Talal Okal, a political analyst for the Ramallah-based newspaper Al-Ayyam, believes that the factions are still taking it easy in responding, giving more leeway to negotiations, but “escalation appears to be inevitable, whether on the part of Israel or the Palestinian factions.”

He told Al-Monitor, “Israel is heading toward more aggression and its pressure on Gaza will cause tension to spill over into the West Bank, as happened in the aftermath of the last war on Gaza."