While some Palestinian political forces have criticized the Islamic Jihad Movement, it has maintained popularity among the Palestinian public for its strong stances and refusal to work with the occupation forces. 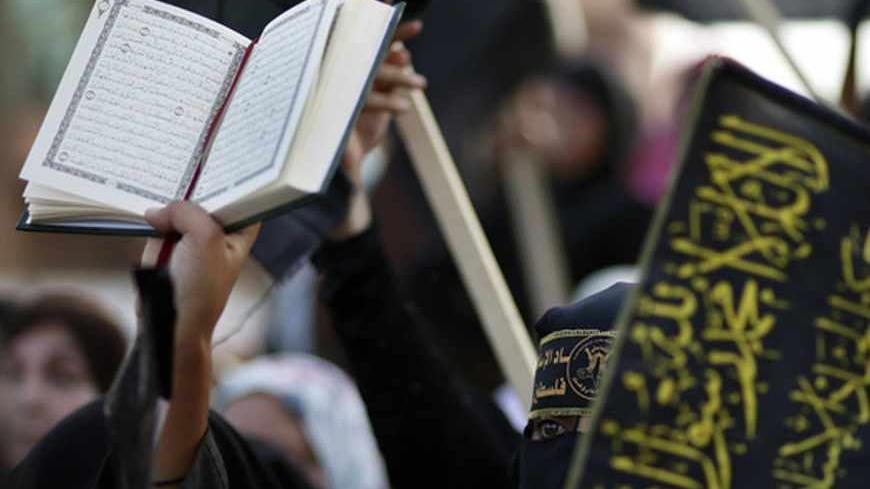 A woman holds a copy of the Quran during a rally marking the 25th anniversary of the foundation of the Islamic Jihad movement in Gaza City, Oct. 4, 2012. - REUTERS/Suhaib Salem

On March 9, 2012, the occupation forces' warplanes assassinated the secretary-general of the Popular Resistance Committees (PRC), Zuhir al-Qaisi, when they bombed his car in the Tel al-Hawa neighborhood, west of Gaza City. This has prompted the Palestinian Islamic Jihad (PIJ) movement to wage a solo war against Israel for four days. At the time, Al-Quds Brigades, the military wing of the PIJ, fired nearly 200 rockets into Israel. They also threatened — should the aggression develop — to use rockets that can reach cities beyond Ashdod, which is located about 35 kilometers from Gaza.

However, the "balance of terror," as described by analysts at the time, which prevailed following the assassination of Haitham al-Mislah on April 30, 2013, and the subsequent Israeli raids led to this pertinent question: Is the PIJ capable of waging a war on its own? Perhaps, the war could expand to include Hezbollah in Lebanon, Iran and Syria. Or will the movement resort to political intimidation, especially as it has announced its intention to run for the National Council of the Palestine Liberation Organization and local council elections?

Al-Monitor met with Khaled al-Batesh, a leader in the PIJ, in his office. He said that the next war is inevitable, as "Zionists at this stage seek to remove the heavy burden off their chests after the results of the last battle in November, when the resistance pounded Tel Aviv with rockets."

He expected that in its next aggression, Israel would try to change the equation and confuse the Palestinian arena by escalating the situation and threatening Iran, Syria and Hezbollah in Lebanon.

"The situation in the Gaza Strip can easily be ignited as the enemy believes that it will achieve a victory in Gaza, but things will not be that simple. The resistance will be fierce to protect the people, win the fight and thwart the plan of the enemy. Hitting Iran will not be easy. Israel and the United States would pay a high price, unlike a war against Gaza, where the international community would have a weak position on this matter under the pretext of fighting against terrorism," he added.

Batesh was confident when he told Al-Monitor that Gaza will likely be involved in a future aggression, as Israel seeks to restore its image, eliminate the factions' limited forces, prevent rockets from being fired from Gaza and impose new conditions regarding the settlement issue, so as to prove to the Israeli community that its government is powerful and capable of imposing its own terms.

Hassan Abdo, a political analyst from the Center for Palestine Research and Studies, does not agree with Batesh. He believes that the last assassination has breached the truce, which was brokered under the auspices of Egypt. This breach, however, was secluded and not within the framework of Israeli policy. He added that Israeli Defense Minister Moshe Ya'alon wants to wage a war, as is evident from recent statements. However, this stance also reflects the position of the extreme right wing to which he belongs.

Abdo confirmed to Al-Monitor that if the occupation forces continued with the assassination policy, the PIJ will not stand by idle, because it is capable of leading a battle on its own against Israel as was the case following the assassination of Qaisi. The movement continued to pound Israel until the latter complied to its will. Abdo added that the current truce involves many parties and the PIJ does not want to be seen as the party seeking to sabotage this situation, and therefore it will work according to a collective vision.

Khoder Habib, a leader within the PIJ, told Al-Monitor that the movement does not prefer to respond [to any aggression] unilaterally. "If the truce is breached, the movement seeks to have a unified Palestinian retaliation that would be much more powerful than a solo response," he added.

He also said that the PIJ considers itself to be one of many Palestinian factions and resistance wings.

When asked about when the resistance would consider Israel to have breached the truce, Habib said, "this depends on the battle and is determined by the brothers in the field and in consultation with the rest of the Palestinian resistance factions."

"The Jihad movement is committed to the truce, although the enemy has breached it many times before. Our commitment reflects the commitment to the people's best interests. Nevertheless, should Israel continue with its violations, the truce will be blown away and the resistance will have to face a serious challenge and will be forced to retaliate," he said.

No to the Oslo Accords

According to the PIJ’s website, the movement's general principles lie in "liberating Palestine from the river to the sea, as this is the land of Muslims and Arabs. No inch of this land should be compromised and the existence of the Zionist entity is void and forbidden. According to sharia, it is forbidden to recognize any part of the Zionist entity. All settlement projects that recognize the Zionist existence in Palestine, or seek to compromise any national rights, are rejected and forbidden."

This explains the position of the PIJ, as it refuses to take part in any legislative or presidential elections in the Palestinian National Authority, which were the product of the Oslo Accords in 1993. Thus, Abdo believes it is unlikely that the movement would be involved in any political process under the Israeli occupation. He added that according to his observation, he believes that the movement views the intermediate authorities that are formed under the occupation as corrupt, as they are created under the occupation and therefore they are serving its interests and undermining the project of the liberation of Palestine.

Habib, on the other hand, said that the PIJ has a clear position on the legislative and presidential elections and it will not take part in them. It has the same position on the Oslo Accords and its outcome. This is why the movement refused to participate in the 1996 and 2006 elections.

"The equation has yet to change. The Oslo Accords are still the reference and we continue to refuse them, as we see them as a deviation from the correct Palestinian direction, which is to resist and liberate the entire land," he said.

In his book "The Islamic Jihad Movement in Palestine: Facts and Attitude," published in 2007, Ramadan Shalah, the secretary general of the PIJ, said that the main reason for refusing to participate in the elections is that they led to the deterioration of the Palestinian situation.

"We are a people who are falling under the occupation. We live what has become known as a phase of national liberation from the clutches of the occupation. In such a phase and under such circumstances, no action must come before jihad and resistance … We wonder what were the elections' repercussions on the Palestinian cause and people, whether internally, politically, socially and at the security level? I believe that everyone agrees that the current Palestinian situation is bad and we are in an unprecedented predicament ... Where is the Legislative Council? Are a quarter of its members not in Israeli prisons? Does this not suggest that this democratic process under the occupation serves as a trap so that we deviate from our priorities, which lie in fighting against the enemy?" Shalah wrote in his book.

Perhaps in light of these political positions, which are becoming increasingly obstinate, and due to the recent war against the Gaza Strip, the popularity of the PIJ has grown to the extent that some liberals and opponents of the Islamic parties have praised it in comparison to other movements affiliated with political Islam, which have been involved in power. The PIJ has begun to gain ground after Hamas has been the most popular movement for many long years before it rose to power.

Habib believes that the growing popularity of the movement is mostly due to the fact that the movement is totally biased toward the resistance without considering other options, "which poses a strategic threat to the Zionist entity. This is especially true as the movement has been targeted by the occupation forces more than other factions," he said.

Batesh, on the other hand, believes that the movement's popularity is the result of its clear positions and its refusal to take part in any agreement with the occupation forces and to the fact that it has not been implicated in the Palestinian bloodshed.