In the second of four exclusive reports from Gaza on the Palestinian Islamic Jihad movement, Asmaa al-Ghoul reports on the movement's greater involvement in Palestinian civic and political life, including municipal elections. 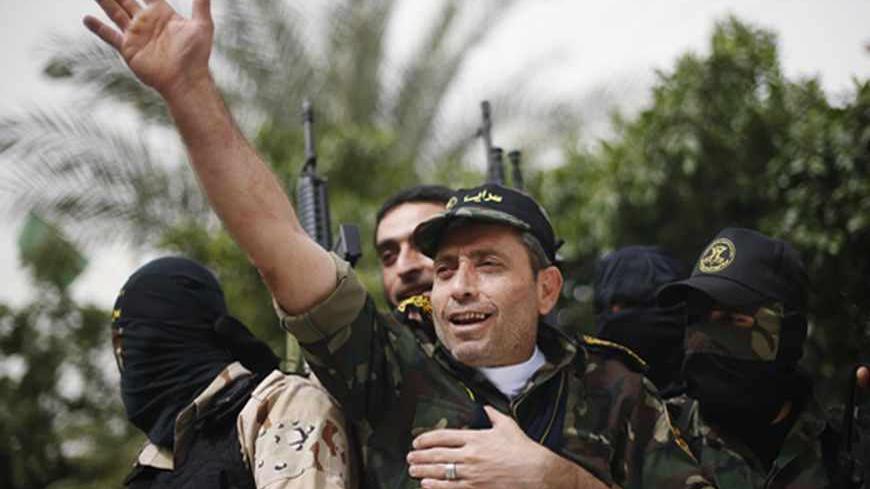 Freed Palestinian prisoner Ibrahim Baroud waves upon his arrival in Gaza City, April 8, 2013. Baroud, who was convicted of his affiliation with the armed group of Islamic Jihad and for carrying out armed attacks against Israel, was released after serving 27 years in an Israeli jail. - REUTERS/Mohammed Salem

For decades, the Palestinian Islamic Jihad (PIJ) movement said that the Palestine Liberation Organization (PLO) did not represent it, since the former was at odds with the factions that politically and intellectually constitute the PLO — until the 2005 Cairo agreement altered this stance. The PIJ agreed with the rest of the factions, including Hamas, to develop and activate the PLO according to a consensual basis, so as to comprise all factions. Words were translated into actions when in 2012, the PIJ participated in the reform sessions and announced that it would take part in the National Council elections.

Last February, and for the first time ever, the PIJ encouraged its members to enlist in the electoral register. This was another sign of change in the movement’s political stance, showing that it was moving toward becoming more engaged in Palestinian civic and political life.

The PIJ and the PLO

Khaled al-Batesh, a leader in the PIJ, believes that engaging with the PLO does not mean potential participation in the parliamentary or presidential elections, since the likelihood of political engagement is far off as long as the national authority and current governments are the fruits of the Oslo Accords, which recognize the state of Israel. Batesh believes that political partnership will only be possible after giving up on the Oslo Accords and espousing another reference.

Batesh believes that [the PIJ] joining the PLO is conditional on restructuring the latter and succeeding in the activation dialogues in which the PIJ is participating through high-ranking leaders. He stressed that they absolutely have no problem in recognizing the PLO and are not at odds with it, they even consider its factions as brothers who fought Israel. Batesh sees the organization as a Palestinian house that has room for everyone. No one should monopolize decisions or compromise national principles.

According to a book by Nazem Omar, The Political Ideology of the Palestinian Islamic Jihad Movement, published in 2008, the PIJ believes that considering Islam as an ideology is one of the keys of resistance to achieving victory and awakening the Islamic nation, while some factions deal with religion as a personal matter that has nothing to do with the struggle. In addition, the PLO was a product of the official Arab system, born out of resolution 1/1964 issued by the Arab League summit. All of these factors created divisions between the PIJ and the PLO, even though the former has portrayed in its mission statement the positive aspects of the establishment of the PLO, especially at the beginning when it was seeking to establish an independent identity.

Returning to Batesh’s interview with Al-Monitor in his office, he affirmed that participating in the elections of the PLO’s National Council wouldn’t be that easy, because it depends on many conditions. These include the restructuring of the organization, an agreement on the national Palestinian program that includes managing Palestinian internal affairs and the conflict with Israel, in addition to preserving national principles and the right of the resistance to reclaim its rights.

Batesh affirms that in the event that they agree on these conditions, the PIJ will take part in the PLO. If not, they will keep managing national relationships from outside the PLO, as they are currently doing through successfully dealing with all national and Islamic parties away from conflicts.

Hassan Abdo, a political analyst from the Center for Palestine Research and Studies, believes that the PIJ has no reservations about the PLO elections, since they are seen as a framework that brings together the Palestinian people who are in need of leadership and have a common reference now that the Palestinian population worldwide has exceeded 11 million. Abdo pointed out that the PIJ is trying to be a comprehensive, realistic project by drawing close to the aspirations of the people.

He also reiterated the idea that their participation in the National Council elections does not mean that they will run in the presidential or legislative elections. He indicated that they have participated in the past in municipal elections, but through independent individuals. Come election season, they will study this step further.

Regarding the consent of the military wing’s movement to this step, he added, “The PIJ does not distinguish between military men and politicians. We are first and foremost against Israel, and there is absolutely no disagreement on these issues. The decision is left to the political bureau, and it is taken through negotiations in the command offices. As for the way these centers are organized, it is an internal affair.”

Khoder Habib, a leader in the PIJ, does not consider participation in the National Council and municipality elections to be shameful. The PIJ is a resistance movement and will remain so. At the same time, it has a totalitarian vision and understands its message that stems from Islam in a way that includes, blends and coordinates political, social and military aspects. Therefore, the movement possesses a varied program as it is a part of Palestinian society.

Regarding the PIJ’s quan d ary of whether or not to participate in the local and municipal councils, Habib emphasized that the local elections happen in a way that does not embarrass the movement. The councils, which are affiliated with the local cabinet that is itself part of the national authority that resulted from the Oslo Accords, after all, aim to serve the people — a goal the PIJ supports. Habib said that [these councils] do not have any political dimension.

In his book The Islamic Jihad Movement in Palestine: Facts and Attitude, published in 2007, PIJ Secretary-General Ramadan Shalah spoke about the establishment of the movement.

“This program was first launched by a scholarly movement that grouped dozens of university students in Egypt, at the end of the 1970s, and headed by Dr. Fathi Shakaki. As of the mid-1980s, the first military entities were formed and started their resistance actions against the occupation, starting in the Gaza Strip. This movement was driven by the status quo that showed Islamists waving the flag of Islam, while neglecting Palestine and resistance groups and civilians holding the flag of Palestine and armed militancy without consideration for their Islamic identity and credo.”

Moreover, Batesh clarified that the flag of the resistance will remain high until everybody reaches a stage of conviction that independence has been achieved. It is only then that they will think of other options for political and national partnership.

Abdo considered the PIJ’s stance different from that of other Islamist movements, such as the Muslim Brotherhood, that has recently risen to power. He said, “Their stances are completely different. The political and intellectual changes stirred by the PIJ at the end of the 1980s, changed the face of the Islamic movement and directed it toward fighting the occupation in order to complete the liberation mission. The elections under the occupation will have to answer to the latter and go against the resistance’s option. Moreover, Israel is always experiencing two different states, either aggression or the preparation for aggression. Consequently, the presence of the resistance will always be justified under these circumstances.”