Qatar’s Al-Araby al-Jadeed reported that talks between Israel and Hamas were renewed through European intermediaries, but the Islamic movement’s spokesman denies it. 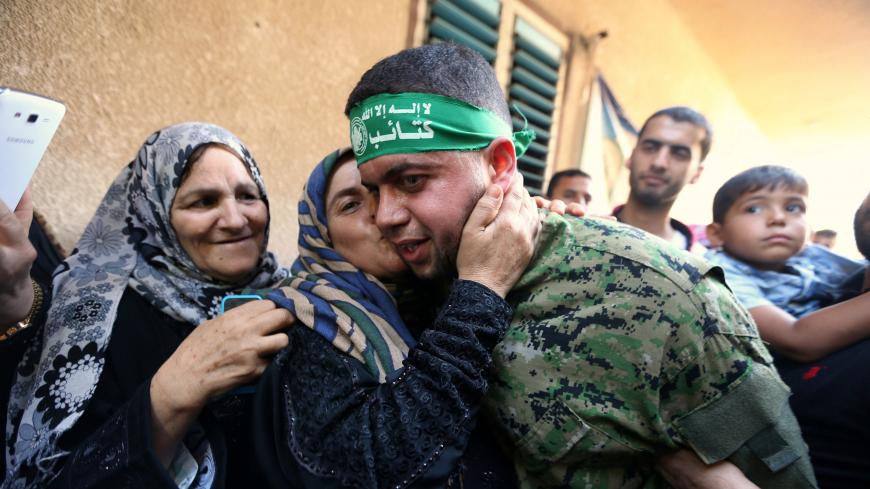 Freed Palestinian prisoner Mohammed al-Bashiti, who served 12 years in an Israeli jail after he was convicted of being a member of Hamas' armed wing, is kissed by his aunt upon his release, in Rafah in the southern Gaza Strip, July 25, 2016. - REUTERS/Ibraheem Abu Mustafa

GAZA CITY, Gaza Strip — The prisoner swap deal between Hamas and Israel has returned to the forefront as competition begins to heat up between Israeli parties seeking to attract voters in the April 9 Knesset elections.

In a Jan. 19 report, Qatar’s London-based Al-Araby al-Jadeed newspaper quoted Hamas sources as saying the group was contacted by an unnamed European country, as well as Cairo, to mediate negotiations with Israel on the swap issue.

The swap issue between Israel and Hamas has been at a stalemate since the end of 2014, despite the Islamic group’s attempts to move it forward by releasing footage in December 2016 about the living conditions of Israeli prisoners in Hamas jails.

Israel has been unyielding, refusing to respond to Hamas' demand for the release of 52 Palestinian prisoners, whom Israel rearrested in June 2014 after their release in the Gilad Shalit deal in 2011.

On Jan. 17, Israel’s Channel 12 aired an investigative documentary on Israeli soldier Hadar Goldin, which included scenes and information revealed for the first time since he or his body was seized on Aug. 1, 2014.

Israel claims Goldin was killed during the 2014 war on Gaza, while Hamas has yet to reveal whether he is dead or alive. Hamas has also not disclosed the fate of another soldier Israel says was killed in the war. Israel also says Hamas is holding two civilians.

In April 2016, Hamas released photos of the four Israelis. Hamas has described all four as soldiers; Israel says the two civilians were captured in 2014 and 2015 after having crossed into the Gaza Strip and the two have been described as mentally ill.

On June 12 of last year, Israel's then-defense minister, Avigdor Liberman, called on Hamas to let the Red Cross see the Israeli prisoners. “We’re asking for the most obvious, humane humanitarian gesture — at least letting the Red Cross see our captives and fallen soldiers,” Liberman said. “After that it will be much easier, not necessarily to reach a long-term ‘hudna’ (cease-fire) but to give humanitarian aid to the residents of Gaza.”

But Moussa Dudin, a Hamas member in charge of the prisoner file, said Hamas would only reveal new information about the four Israelis if Israel is ready to pay a price for each piece of information.

He told Al-Monitor that prisoner exchange talks between the group and Israel are at a standstill, denying reports about renewed talks with Israel through intermediaries. Dudin said the situation has been at a stalemate because Israel has refused to yield to Hamas’ conditions. He also said Israeli political parties are trying to come across as hard-liners when it comes to Hamas prisoners in the run-up to the national elections.

He said Hamas’ only condition to start indirect negotiations is the release of the prisoners who were rearrested in 2014.

“Egypt’s efforts as a mediator are still ongoing, but have not made any progress yet, although Hamas would have shown flexibility in the release process of the Gilad Shalit deal prisoners whom Israel rearrested,” Dudin said.

Several countries have tried to mediate between Hamas and Israel to restart negotiations to reach a swap deal, namely Egyptian, Turkish, Qatari and German intermediaries, but to no avail. Israel, however, said that it was ready to start negotiations but without any prerequisites such as those set by Hamas.

Al-Monitor tried to contact several Egyptian officials in Cairo and in the Egyptian Embassy in Ramallah, but to they all refused to give details, saying, “The prisoner swap issue between Hamas and Israel is the prerogative of the Egyptian intelligence service.”

The families of the four Israelis have upped their protests during the past year in a bid to further pressure the Israeli government to get the bodies and/or prisoners released.

The families are expected to escalate their movements as some accuse Israeli Prime Minister Benjamin Netanyahu of betraying them by allowing Qatari funds to reach Hamas in the Gaza Strip instead of pressuring the group to release the bodies and/or prisoners.

Palestinians described the raid as the most violent since 2007, during which dozens of prisoners were injured.

Nahed al-Fakhouri, director of the Hamas-run Prisoners Information Center, said the Israeli prison raid was an attempt to pressure Hamas to retreat from its conditions to start the negotiations and to crack down on prisoners as part of the Israeli electoral campaign.

Fakhouri said the Israeli forces raided 15 sections in the Ofer prison, beating prisoners and firing tear gas, which resulted in dozens being injured and transferred to Israeli hospitals.

He said Palestinian prisoners are impatiently waiting for the negotiations in hopes of a swap deal with Israel, as they believe this to be the fastest way out of Israeli prisons.

More than 5,700 Palestinian prisoners are behind bars in Israel, and some have been jailed for decades; 700 suffer from various diseases, and 30 of them have cancer.

Abdul Rahman Shehab, director of the Atlas Center for Israeli Studies in Gaza, told Al-Monitor that the media leaks about renewed talks between Hamas and Israel are meant to buy time and silence the families of the Israeli soldiers during the election campaign and make them believe that Netanyahu is bending over backward to try to get their children home.

Shihab said no Israeli official is now allowed to start any swap deal negotiations with Hamas as this would negatively affect votes in the upcoming parliamentary elections. He said he expected that any future swap deal would be part of a bigger deal whereby Israel promises a longer-term truce to the factions in the Gaza Strip in exchange for prisoners and lifting the blockade that has been ongoing since 2007.

The prisoner swap issue with Hamas is one of the thorniest dossiers Lt. Gen. Gadi Eizenkot left for his successor as chief of general staff, Lt. Gen. Aviv Kochavi.

While handing over his responsibilities to Kochavi on Jan. 15, Eizenkot expressed his sadness at not being able to “return my soldiers home safely” during his tenure.