Will political crises lead to a Hamas-Israel prisoner swap?

A desire by Hamas to improve it's standing among Palestinians and the current political predicament of Israeli Prime Minister Benjamin Netanyahu might make a prisoner swap more inevitable in the near term. 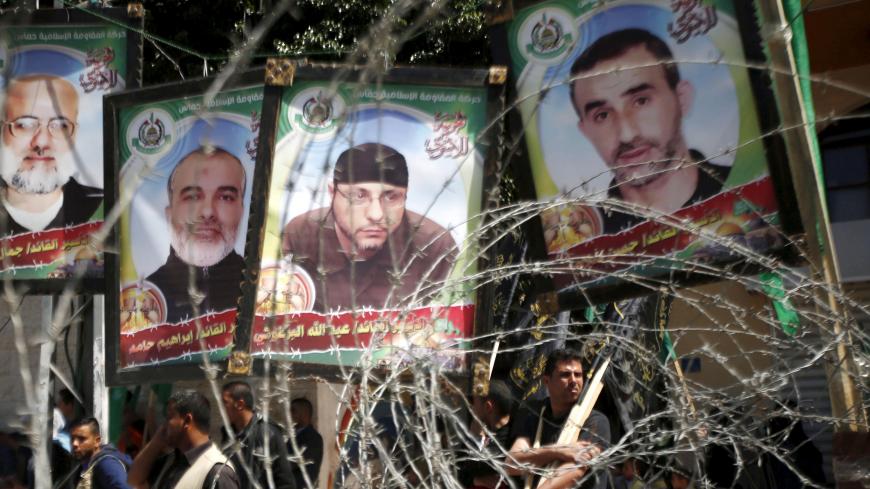 Moussa Dudin, Hamas political bureau member in charge of the prisoners’ file, told Palinfo on Dec. 4 that Egypt, Gemany, Qatar,  Sweden and Turkey along with an unnamed sixth country are working to conclude a prisoner exchange deal between the movement and Israel.

Hamas holds the remains of two Israeli soldiers, Oron Shaul and Hadar Goldin, captured during the 2014 war. The group is also holding Hisham al-Sayed, an Israeli Arab, and Avera Avraham Mengistu, an Ethiopian Jew, both of whom entered Gaza voluntarily in 2014. Among Palestinian prisoners of particular interest to Hamas are dozens whom Israel had previously released in a 2011 swap but then later rearrested.

On Nov. 3, Yaron Blum, Israel's coordinator for efforts to reach a swap deal, said in a radio interview with Kan that several channels were working on an exchange through indirect negotiations with Hamas. Talk of a possible swap has increased in light of the troubles Israeli Prime Minister Benjamin Netanyahu faces after twice failing to form a new government and being indicted on corruption-related charges. A prisoner deal would be a welcome boost for him.

Dudin told Al-Monitor, “Many parties approached us in order to conclude the deal [after] we had presented them with written demands. … Instead of looking into intelligence means to retrieve the bodies of Israeli soldiers, Netanyahu ought to conclude a new deal like the previous one if he wishes to alter his domestic situation.” Hamas is thought to be seeking the release of hundreds of high-ranking prisoners as part of a deal.

Nahed al-Fakhouri, director of the Hamas-run Prisoners Information Center in Gaza Strip, told Al-Monitor, “We expect that the next deal, like the previous one [in 2011], will include the release of detained Palestinian leaders from Hamas, Fatah, Islamic Jihad, the Democratic Front for the Liberation of Palestine and the Popular Front for the Liberation of Palestine (PFLP), from the West Bank, Gaza Strip and Jerusalem, and Palestinians in Israel.”

Hamas appears to be counting on the inclusion of prisoners from various factions in any swap to improve its position among Palestinians at large. Hamas political bureau member Salah al-Bardawil had on Oct. 21 publicly insisted that the swap include the release of PFLP Secretary-General Ahmed Saadat and Fatah Central Committee member Marwan Barghouti.

Regional and international efforts to conclude a deal between Hamas and Israel suggest to some in Hamas that the Israeli detainees and remains constitute a trump card in the movement's hand in its dealings with Israel, which faces public demands from the families of those held and those wanting the remains of their sons returned to them.

In the alleged involvement of international mediators, some see an opportunity for Hamas to improve political relations to relieve its political isolation as well as a potential desire on the part of some parties — in particular, Egypt, Qatar, and Turkey — to increase their influence on Hamas.

As Israel talks about a breakthrough in regard to a swap, the Palestinians fear an Israeli special operation to retrieve the prisoners and remains. Beginning in early December, Israel intensified flights of military aircraft over Gaza, which some speculate could be for gathering intelligence related to the recovery effort. This is heightening tensions about security in Gaza.

Mohammed Abu Harbeed, an expert in security affairs, told Al-Monitor, “The Israeli endeavor to determine the fate of the soldiers and get any information about whether or not they are dead is expected, because it contributes to raising or lowering the ceiling of Hamas’ demands to conclude a deal, and Israel is using spies on the ground as well as technical means to be sure.”

He further remarked, “Israel announced that [the soldiers] were dead, but it believes there is a 1% chance they are alive, and Hamas is very secretive and will not say a word about it if it does not get anything in return.”

It is unclear whether Israel, amid its current political crisis, is in a position to conclude a prisoner exchange deal with Hamas, but Egypt's efforts to achieve a long-term truce between them might contribute to mutual concessions being made to bring the parties closer to a deal.