Palestinian sources claim that Israel has offered Hamas a limp proposal for a prisoner-exchange deal. 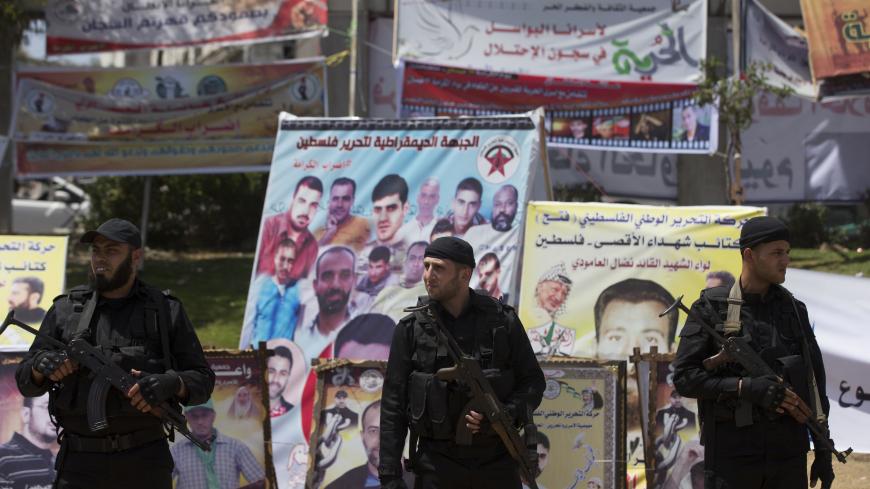 Hamas security forces stand guard during a visit of Hamas chief Ismail Haniyeh to protesters taking part in a sit-in in support of Palestinian hunger-striking prisoners held in Israeli jails, on May 8, 2017, in Gaza City. - MAHMUD HAMS/AFP via Getty Images

According to reports that emerged on July 9, Israel sent Hamas a new outline for a prisoner-exchange deal through an intermediary. The Palestinian sources cited argued that the Israeli proposal was meager, offering only the return of bodies of Palestinian assailants in exchange for the bodies of IDF soldiers Oron Shaul and Hadar Goldin, or the release of Palestinian prisoners in Israel ‘with no blood on their hands,’ meaning those who were not involved in the killing of Israeli nationals.

The Palestinian sources insisted that the new outline was not a serious offer but a test designed to manipulate, to lower expectations and lead to deeper negotiations.

Israel did not react officially to this news, but according to the Israeli press, Hamas has made it clear that it will not negotiate any prisoner-exchange deal without the release of all of those prisoners who were released in the 2011 Gilad Shalit deal and then rearrested again by Israel. Its preconditions also include the release of all elderly and sick prisoners.

Several of the Shalit deal prisoners were rearrested in 2014 after the kidnapping and murder of three youths in the West Bank Etzion settlement bloc. A few others were rearrested over the following years for involvement in terror attacks or other offenses.

Shaul and Goldin were killed in the summer of 2014 during Operation Protective Edge. Since then, Israel has not ceased its efforts to retrieve their bodies. Jerusalem was and still is hoping for a comprehensive deal that would also enable the return of two Israelis who crossed the border into Gaza separately in 2014 and 2015, Avram Avera Mengistu and Hisham al-Sayed, both apparently held by Hamas and both apparently suffering from mental health issues.

On April 7, Prime Minister Benjamin Netanyahu’s office issued an unusual statement reading that Coordinator for Captives and Missing Persons Yaron Blum and his team are “committed to acting constructively with the aim of bringing back the soldiers’ bodies and missing civilians and putting an end to the issue." The announcement then called “for immediate dialogue between mediators” to facilitate a deal with Hamas.

On July 2, Netanyahu again referred publicly to the issue. In a recorded message for the annual commemoration of those lost during Protective Edge, Netanyahu said that Israel is still working to retrieve the bodies of soldiers killed in the Gaza Strip six years ago and that his government would not miss “a window of opportunity” to bring them home.