Hamas wants to restore ties with Saudi Arabia, but mediation efforts were stymied by disagreements over the US "deal of the century," the Arab Peace Initiative and other issues. 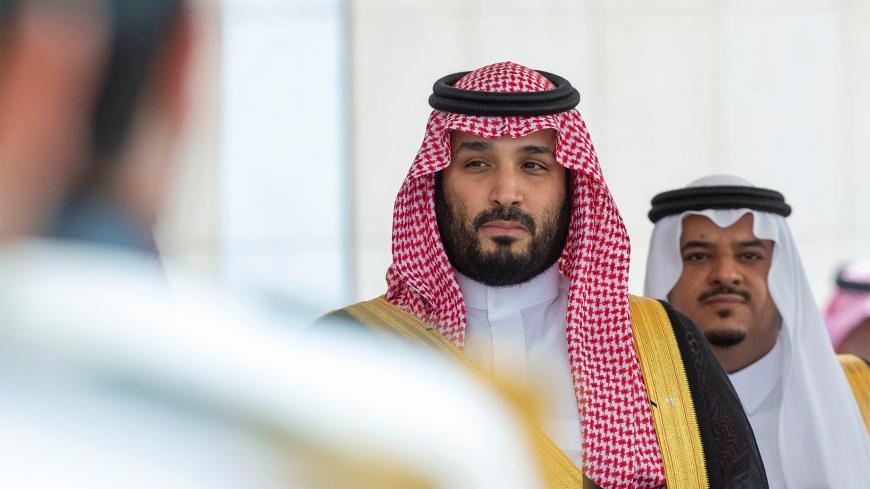 Mediation designed to reboot the connection between Saudi Arabia and Hamas has failed, with the former issuing conditions the latter rejects, according to anonymous sources cited by Arabi21 news.

Saudi Crown Prince Mohammed bin Salman set the condition that before his kingdom reconciles witih Hamas, the movement must resolve its differences with the United States, Arabi21 reported Jan. 9. This implies that Hamas would have to recognize Israel and its right to exist, which Hamas rejects.

Tension has prevailed in Saudi-Hamas ties since Saudi Foreign Minister Adel al-Jubeir demanded in 2017 that Qatar halt support for Hamas and other groups he characterized as extremists. The Saudi arrests last year of Hamas activists and sympathizers aggravated the situation. In April and May, Saudi Arabia arrested more than 60 Palestinians, Jordanians and Saudis on charges of sympathizing with Hamas and collecting donations for the movement. The Saudi campaign also involved freezing the assets of some of the detainees and supervising financial transactions.

Mahmoud al-Zahar, a member of the Hamas politburo, told the Paltoday news website Jan. 13 that the problem of the detained Hamas sympathizers in Saudi Arabia has yet to be resolved.

A Palestinian source familiar with the issue of detainees in Saudi Arabia told Al-Monitor on condition of anonymity, “Egypt, Kuwait, Turkey and Lebanon are the key mediators that have striven to restore Saudi-Hamas ties. Their efforts, which have been ongoing since May 2019, resulted in some Jordanian, Saudi and Palestinian detainees being freed and other Palestinians and Jordanians being deported to Jordan.” He added, “The Hamas leadership invested in its relations with Saudi officials to resolve the crisis, as it desires to avoid a full rupture with Saudi Arabia."

Hamas political bureau member Salah al-Bardawil told the Gaza-based Felesteen newspaper Jan. 13 that Saudi Arabia recently freed some of the Hamas members. He didn't indicate how many were released or their nationalities. Bardawil emphasized that Hamas seeks to promote ties with Riyadh and that their bilateral relations are neither hostile nor ambivalent.

However, the Saudi newspaper Makkah published in May a list of 40 Islamic figures it labeled as terrorists. The list includes the founder of Hamas, Sheikh Ahmed Yassin (killed by Israel in 2004), and senior Hamas leaders such as Ismail Haniyeh, Khaled Mashaal, Yahya Sinwar and Mohammed al-Deif. (The article was was removed from the website a few hours after it was posted.)

Hamas spokesman Hazem Qassem told Al-Monitor the effort to free Palestinian detainees is "a strictly humanitarian cause that needs to be separated from political conditions." He added, "We reached out to some Arab and international sides to end their suffering." According to Qassem, "Hamas has not received any demands linked to the way its foreign relations should be managed."

Since December, Hamas chief Haniyeh has been on a tour that includes Egypt, Qatar, Turkey, Iran and Oman, which raises the question of whether he will visit Saudi Arabia amid such tension. Al-Monitor tried to learn from Hamas whether Haniyeh will visit Riyadh, but to no avail. The last Hamas visit to Saudi Arabia occurred in July 2015, with Saudi King Salman bin Abdulaziz Al Saud hosting then-Hamas politburo chief Meshaal.

Wesam Afifa, director general of Al-Aqsa TV, told Al-Monitor, “Despite the Hamas-Saudi crisis, Hamas has not completely severed ties with Riyadh, and has asked in recent months to visit Riyadh to clear up any misunderstanding, but no reply was received.” He added, “Hamas has not imposed any conditions in exchange for restoring ties with Saudi Arabia. Rather, it wants to remain apart from any regional polarization, and doesn't want Saudi Arabia to require that it cut ties with Tehran. Saudi Arabia did not sever ties with Hamas, and even when [Riyadh] made public its list of terrorists in 2017, Hamas was not added to the list."

However, he said, “The Saudi conditions to restore ties with Hamas are a part of the US 'deal of the century,' to which Hamas will not consent.” Details of the deal haven't been released, but the United States said it is supposed to resolve Israeli-Palestinian enmity and bring peace to the Middle East.

Talk of the failed mediation with Riyadh comes in light of Hamas' rapprochement with Iran, highlighted by Haniyeh’s historic and highly controversial visit Jan. 6 to Tehran for the funeral of Iranian Quds Force commander Maj. Gen. Qasem Soleimani, who was assassinated Jan. 3 by a US strike in Baghdad. Haniyeh's visit prompted Saudi Arabia's Okaz newspaper Jan. 6 to say Hamas has become a dependent or hostage of Iran.

Iran’s Fars News Agency, on the other hand, wrote in a Jan. 12 opinion piece that the visit was designed to send a message to Saudi Arabia that the Palestinian resistance is strong and has Iran's support.

Hussam al-Dajani, a political science professor at Al-Ummah University in Gaza, told Al-Monitor, “Since [Mohammed] was appointed crown prince in 2017, the Saudi orientations have changed [worsened] toward Hamas, which resorted to Iran to further obtain military and financial support.”

He added, “Despite the current dispute between Saudi Arabia and Hamas, the strategic environment could help them restore ties, though gradually. This is in light of signs pointing at a Qatari-Saudi reconciliation. This could require that Hamas manage its relations with Saudi Arabia in a wiser manner. The Saudi conditions to reconcile with Hamas are linked to the Arab Peace Initiative [to end Arab-Israeli hostilities] announced in 2002, and the Saudi desire that the movement approve of [that initiative].”

Although Hamas hopes to reconcile with Saudi Arabia, the movement's recent revival of ties with Iran could hurt the mediation process. Hamas is well aware of the sharp Iran-Saudi polarization, and the Saudis could drag out efforts to restore ties.

Though Hamas has made it clear that it makes its own decisions regardless of foreign influence, if the tension with Riyadh persists, Iran could wind up being the exclusive influence on Hamas — something Riyadh doesn't want.