Why Hamas hopes to keep low profile in Saudi-Iranian tensions

In light of the escalating dispute between Iran and Saudi Arabia, Hamas has remained silent to maintain good ties with each party, as both have provided it with financial or military support. 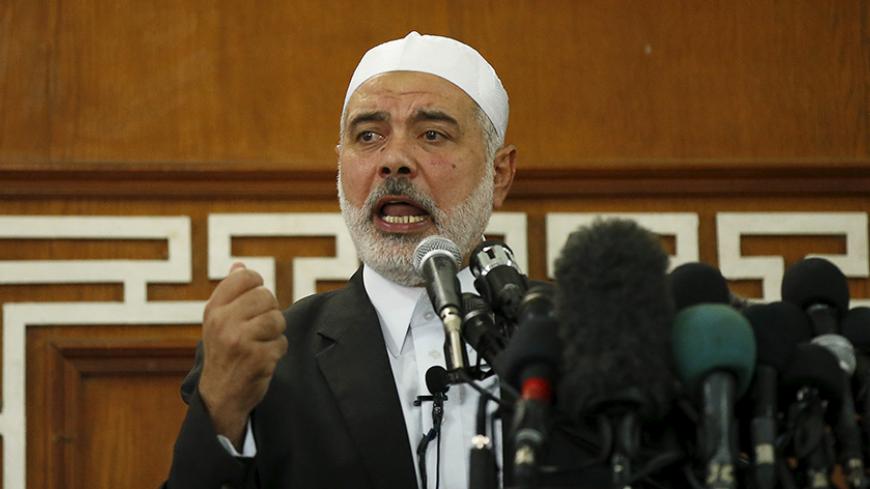 Hamas has been able to avoid taking sides so far in the mounting tension between Saudi Arabia and Iran, but the higher the pressure rises, the more likely the movement will be forced to choose.

On Jan. 3, Saudi Arabia severed diplomatic ties with Iran after Iranian demonstrators attacked the Saudi Embassy in Tehran, protesting the Saudi execution of Shiite cleric Nimr al-Nimr. Some countries in the region, including Turkey, Iraq, Jordan, Qatar, Morocco and Egypt, sided with Iran in the dispute, while others sided with Saudi Arabia.

It is no secret that Hamas’ ranks have been torn in the dispute, as the Palestinian Islamic movement seems keen on maintaining relations with both parties. However, by remaining silent, Hamas is risking the wrath of both sides.

In this context, Sami Khater, a member of Hamas’ political bureau residing in Doha, Qatar, told Al-Monitor, “It is none of Hamas’ business to interfere in the bilateral relations between Arab and Islamic countries. The movement hopes consensus and understanding would prevail among them, because what they have in common — the Palestinian cause and unity of blood and religion — is stronger than their differences on borders and political disputes. It is still early to talk about what repercussions the Saudi-Iranian dispute will have on the Palestinian cause, and we hope that this dispute will not negatively affect our cause.”

On Jan. 6, Ismail Haniyeh, deputy head of Hamas’ political bureau, sent letters to leaders in Saudi Arabia, the United Arab Emirates, Kuwait, Jordan and Turkey urging them to support the Jerusalem uprising and the steadfastness of the Palestinian people. However, he did not address a letter to Iran. It seems Hamas might be hoping Iran won’t invite Meshaal to visit right now, as Hamas wants to avoid being accused by Saudi Arabia of siding with Iran. Meshaal last visited Tehran in November 2012.

Hamas has had strong relations with Iran in the past. Iran provided financial and military support for Hamas from 2006 to 2012, and the movement thanked Iran for this support, which helped it face the Israeli siege after Hamas’ victory in the 2006 legislative elections. But the relations weakened significantly when the Syrian revolution broke out in early 2011, as Hamas did not support the Syrian regime and its oppressive measures against the revolution.​ As Hamas and Iran support different sides in the Syrian revolution, Hamas may find it difficult to make a move toward Iran because of the negative Arab perception of the Iranian role in the region, as noted Jan. 18 by Al Jazeera Center for Studies in Qatar.

Yet, a Hamas media official told Al-Monitor on condition of anonymity that “communication channels between Hamas, Saudi Arabia and Iran are still open.”

Hamas seems well aware that it needs to maintain relations with Saudi Arabia, which sees itself as the leader of the Sunni world. At the same time, the movement is unlikely to distance itself from Iran, which has provided Hamas with financial and military support off and on.

Further complicating the issue, Hamas is aware that Iran’s influence in the region could increase now that the international sanctions have been lifted, at a time when the Saudi economy is deteriorating due to declining oil prices.

Osama Hamdan, head of Hamas’ international relations, told Al-Monitor, “Hamas’ relations with Iran and Saudi Arabia are not new, given the movement’s need for the Islamic nation’s support, and Hamas is steadily working on improving its relationship with the two. The movement’s contacts have not been severed with the Iranians, as Hamas refuses to involve the Palestinian cause in the regional crises.”

Abdel Sattar Qassem, a political science professor at An-Najah National University in Nablus in the West Bank, told Al-Monitor, “Hamas should consider its needs before taking a stance on the Saudi-Iranian crisis. It ought to know whether it needs money or weapons. While the first option is available with Saudi Arabia, the second is available with Iran alone, and there is no third option for Hamas. Therefore, it would be in the movement’s interest to remain silent about what is happening between Saudi Arabia and Iran, all the while staying close to Iran, given the military support that the country provides the movement with — although support for the movement is currently suspended. If Iran or Saudi Arabia asks Hamas for a clear position, then the movement should refrain from making any statement.”

For his part, Youssef Rizqa, former minister of information in the previous Hamas government, told Al-Monitor, “Despite the fact that [Hamas] has interests with both parties, it was not asked to mediate to reconcile them with each other. However … just like Iran asked Hamas for a position on the Syrian crisis, Saudi Arabia asked for a similar position on the Yemeni crisis, because Hamas is a resistance movement that has an influence on the Arab public opinion.”

If the Saudi-Iranian crisis reaches the point of military confrontation, Hamas could be forced to pick a side — and pay a steep political and financial price no matter which it chooses.