Since the Gulf Cooperation Council decided to label Hezbollah a terrorist organization, Hamas has remained silent and refrained from taking sides so as not to endanger its regional relations. 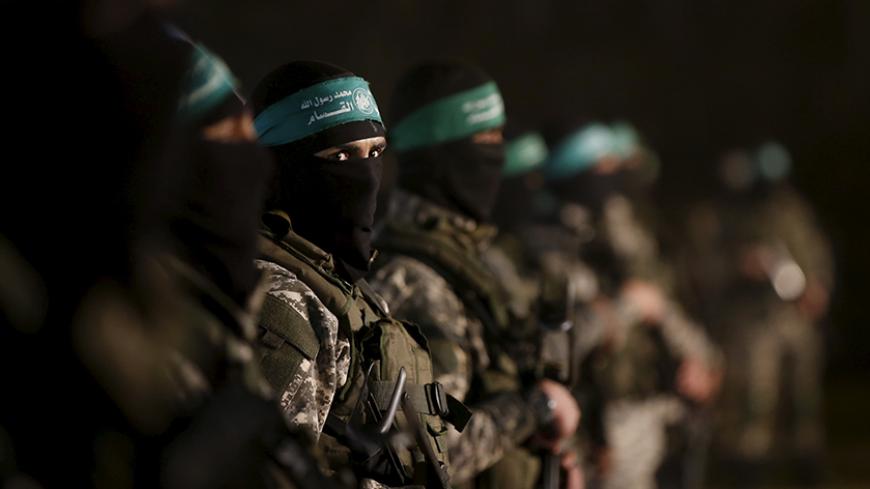 Hamas militants stand guard during a rally in memory of seven people who were killed when a tunnel collapsed close to the Gaza Strip's eastern border with Israel, in the east of Gaza City, Jan. 31, 2016. - REUTERS/Mohammed Salem

Hamas isn't saying much these days. So far, it has kept its head down and refused to pick a side since the Gulf Cooperation Council declared Hezbollah a terrorist group March 2. Hamas is extremely cautious about taking a political position because of increasing polarization between the opposing axes currently splitting the Arab region between Saudi Arabia and Iran.

On the same day the GCC labeled Hezbollah a terrorist organization for hostile acts against the council, Arab interior ministers meeting in Tunisia accused Hezbollah of shaking up the region’s security. Hamas is at a loss about which side to take.

Meanwhile, also on March 2, some Palestinian factions did side with Hezbollah. The Popular Front for the Liberation of Palestine claimed the Arab decisions will only benefit the Zionist enemy. The PFLP General Command accused the Gulf states of supporting terrorism, while the Islamic Jihad movement viewed the decisions as an escalation threatening Lebanon and the region's security.

Gen. Mohamed Mansour, a Palestinian Authority security official who attended the Tunisia meeting, stressed that the aggravated Arab situation means that such security threats must be confronted.

However, Hamas remained silent regarding this major shift in the official Arab position against Hezbollah, not wanting to risk its regional relations with Saudi Arabia or Iran. Now observers are wondering how Hezbollah will deal with this silence.

Senior Hamas leader Ahmed Yousef, who was a political adviser to former Palestinian Prime Minister Ismail Haniyeh, told Al-Monitor, “Hamas’ silence reflects political wisdom, although it wants to preserve its relationship with Hezbollah. We have no intention of expressing political positions that would lead to a rupture or embarrassment with any party, be it with the Gulf states, Iran or Hezbollah. Although we do not agree with Hezbollah for interfering in Syria, Iraq and Yemen, [we cannot deny] its support for us against the Zionists.”

The Gulf countries offer a different kind of support to Hamas, as a number of Hamas political leaders reside in Qatar. The leaders there enjoy relative political security and can travel freely from one Gulf country to another. This is a positive thing for Hamas, considering the movement left Syria in late 2012 because it disagreed with the way Syrian President Bashar al-Assad’s regime handled the popular revolution in the country.

On the other hand, Hezbollah provides Hamas with military aid that includes weapons and training. The ties between both parties have remained stable despite their disagreement over Syria, as Hezbollah is totally involved in the fighting alongside the Syrian regime, which Hamas criticizes.

However, “The available information shows that Hezbollah is not comfortable with Hamas’ silence, because accusing it of terrorism could affect other parties at a later stage, including Hamas," said Qassim al-Qassir, a Lebanese political analyst who is close to Hezbollah. "Although Hamas and Hezbollah do not agree over the issues in Syria, Iraq and Yemen, one cannot remain silent about accusations of terrorism, given the historical relationship between Hamas and Hezbollah," he told Al-Monitor by phone from Lebanon.

“Hezbollah understands Hamas’ desire to balance its positions in this critical phase, but it should not be at the expense of the position toward the resistance. Hezbollah follows up on all positions expressed by different Arab parties, and such positions could have repercussions on its relationship with them," Qassir continued. "Oddly enough, many leftist, secular and nationalist forces condemned the Arab decisions against Hezbollah, while an Islamist movement like Hamas remained silent, although we trust that Hamas has the ability to take a certain position that would allow it to keep the communication channels open with all regional parties.”

It should be noted that Hezbollah remained silent when Egypt classified Hamas as a terrorist movement in February 2015, and that lack of support could be affecting Hamas' decision to remain neutral now.

“Hamas is in a difficult situation and it cannot express a position," Abdel Sattar Qassem, a political science professor at An-Najah University in Nablus, told Al-Monitor. "It is puzzled and cannot take a stance regarding the Arab decisions against Hezbollah, although around 100 Hezbollah members have died while trying to smuggle weapons to Hamas in the past 10 years, and this is why it should support Hezbollah.

"Of course, the party did not ask Hamas to take a position that would harm it regionally, but it will keep observing Hamas’ positions. Should it side with Saudi Arabia, Iran could take a firm stance to completely stop providing support for the movement.”

On March 6, some media outlets reported that Hamas quietly sent a message of support to Hezbollah, refusing to consider it a terrorist organization. However, a senior Hamas leader based in Qatar told Al-Monitor on condition of anonymity that the reports were not true, saying, "Hamas expresses its positions through official statements and spokespersons, and those positions are published on the movement’s official website and distributed to the media by conventional means."

Perhaps the recent Arab decisions against Hezbollah are a natural consequence of the sectarian division between Saudi Arabia and Iran that has put Hamas in an unenviable position.

Hamas either has to support the GCC stance against Hezbollah and cut off the last of its relations with Iran and Hezbollah, or side with the party and possibly lose its relations with the Gulf states — along with its last geographic stronghold in the region, Qatar, where much of the Hamas leadership resides. Hamas could also go with the third option and remain silent, which might cost it less. Hamas seems to believe the region is heading toward a more dangerous situation, prompting it to distance itself from what could be coming its way.