How far will the Saudis go against Hezbollah?

With Saudi Arabia labeling Hezbollah a terrorist organization, a decision that was endorsed by the GCC, the kingdom hopes to legally pursue the Lebanese movement in international forums. 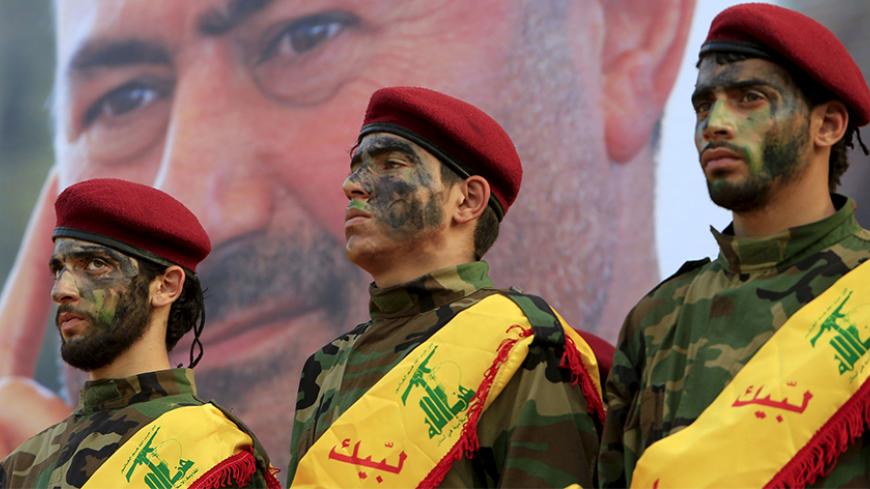 Lebanese Hezbollah members stand in front of a picture of one of Hezbollah's top commanders who was killed fighting in Syria, during his funeral in al-Luwaizeh, southern Lebanon, Oct. 12, 2015. - REUTERS/Ali Hashisho

During the 145th session of the Arab foreign ministers meeting at the Arab League in Cairo on March 10, Bahraini Foreign Minister Khalid bin Ahmed Al Khalifa accused Iran of smuggling weapons and explosives that have fueled sectarian strife in Arab societies and accused Lebanese Hezbollah, which Iran supports, of terrorism. His accusations came a day after the Gulf Cooperation Council (GCC) reaffirmed a decision it had made on March 2, designating Hezbollah a terrorist organization on the ground that its actions have destabilized security and the social peace in some Arab countries, an assertion raised by the foreign ministers of the GCC, Jordan and Morocco.

Despite media leaks about disagreement among the GCC states over Hezbollah's classification because of differences of opinion on Iran, a unanimous resolution was finally adopted, even by Oman, which had initially proposed that the designation only apply to the party’s military wing, along the lines of the approach taken by the European Union in July 2013. When asked by Al-Monitor about Oman's stance on the terrorist designation, a well-informed GCC source who requested anonymity said, “Lengthy discussions took place in the past days between GCC members concerning the wording of the resolution, with the Omanis demonstrating remarkable flexibility in this regard compared to their previous rigid position in dealing with resolutions condemning or boycotting Iran. The GCC was thus unanimous, as in general, an understanding existed therein concerning the stance vis-a-vis Hezbollah.”

In statements made Feb. 25 to Lebanon’s LBC channel, Interior Minister Nouhad Machnouk said that in 2015 Hezbollah and the Islamic Revolutionary Guard Corps were involved in hosting and training Shiite factions from Gulf countries — in particular from Kuwait, Bahrain, Saudi Arabia and the United Arab Emirates — on Lebanese soil.

It seems these statements embarrassed Iran’s friend Oman — whose economic and political ties with Tehran have been developing, with a sea bridge expected to open in the coming days between the two countries — and hurt its chances of being able to amend the Gulf statement on Hezbollah. Muscat already faced accusations of turning a blind eye to the illicit passage across its borders of Yemen-bound Iranian personnel and arms destined to support the Houthis. It thus was not in Muscat’s interest to provoke a crisis with Saudi Arabia, the UAE, Bahrain and Kuwait, whose leaders all believe that the politically insightful rhetoric of Hezbollah was no less dangerous than military operations targeting Gulf states. As a result, the Omanis chose to recognize its Gulf neighbors’ concerns and allow the passage of the resolution against Hezbollah, irrespective of Muscat’s level of commitment toward its implementation.

Qatar also endorsed the Hezbollah resolution despite the possible repercussions on efforts to free some of its citizens kidnapped in southern Iraq by Shiite factions Dec. 16. The Qataris, by virtue of their long relationship and experience with Islamist factions such as the Muslim Brotherhood and the Afghan Taliban, as well as the Houthis and Hezbollah, are well aware of the level of ideological loyalty within the movements of political Islam and the extent of their connections to Islamic governments, including Iran. It therefore was unlikely that Qatar — which expelled 18 Lebanese nationals in June 2013 on charges of being affiliated with Hezbollah and in September 2014 deported Brotherhood leaders in response to a request by Saudi Arabia — would sacrifice its historical relationship and interests with the Saudi state for the sake of an unpredictable party such as Hezbollah.

Stressing Qatar’s support for Saudi Arabia, a March 10 editorial in the Qatari al-Raya newspaper called the Gulf stance against Hezbollah a clear message that there is no place for the party in any Arab country, including Lebanon. Thus, Riyadh succeeded in condemning and isolating Hezbollah on the Gulf and Arab levels, making it easier to achieve its goal of discussing the Hezbollah dossier at the Islamic level during the 13th summit of the Organization of Islamic Cooperation, scheduled to be held April 10-15 in Istanbul.

Furthermore, in light of Turkish Deputy Prime Minister Naaman Kortolmos’ March 4 condemnation of Hezbollah’s involvement in criminal acts in Syria, it would seem that Turkey would not object to the adoption of a resolution by Islamic states classifying Hezbollah as a terrorist organization. This would make the group's presence in Syria and other places equivalent to that of the Islamic State (IS) and allow its targeting by countries of the Islamic coalition against terrorism, which Riyadh announced the establishment of in December. Most coalition members took part in the North Thunder war games, which began Feb. 27 under the leadership of Saudi Brig. Fahd al-Mutair, the Northern Military Region commander, at King Khalid Military City, in the northeastern region of Hafr al-Batin.

Riyadh’s escalation against Hezbollah followed the Saudi media's Feb. 24 airing of a video discovered by the Yemeni army at a captured Houthi position. The footage shows a Lebanese military adviser from Hezbollah by the name of Abu Saleh talking to Houthi soldiers about conducting military and suicide attacks inside Saudi Arabia.

In addition, on Feb. 21, Saudi media outlets had announced the initiation of legal proceedings against a spy ring associated with Iranian intelligence services and consisting of two Afghans, one Iranian and 30 Saudi Shiites, whom Saudi authorities had begun pursuing and arresting in March 2013 in Mecca, Medina, Riyadh and al-Sharqiyyah. Most prominent among them is a consulting physician, who was asked by officials at the Iranian Embassy in Riyadh to write reports on the health of important Saudis receiving treatment at the King Faisal Specialist Hospital in the city. The hospital serves princes, senior officials and some private citizens who receive special permission to be seen there. Also in the ring is a Saudi security officer from the pilgrimage security force who provided information to Iran about the location of tents allocated to Saudi and non-Saudi officials and VIPs during the pilgrimage.

Saudi officials, who have long maintained that they would not abandon Lebanon, are saying in international meetings and gatherings that their problem is exclusively with Hezbollah as a military and political entity, not with the Lebanese people. It thus seems that the actions being taken by Saudi Arabia and the Gulf states — including the cancellation of a military aid deal to the Lebanese army and of residency permits of Lebanese residing in the Gulf — are aimed at punishing the Lebanese political parties and figures who support Hezbollah and object to labeling it a terrorist organization. This is being done in pursuit of the further goal of pushing the Lebanese to rebel against Hezbollah. In theory, the Lebanese would direct their energies toward punishing the party and all of its agencies and officials that pose a threat to Gulf regimes and hold the party’s leadership responsible for the reckless exploitation of sectarian passions for the benefit of Iran.

Riyadh's retribution will not be limited to drying up the party’s sources of financing, an effort that began in May 2015 when lists of people and companies associated with Hezbollah were classified as terrorists by Saudi Arabia and other Gulf countries. Rather, it will go beyond that to pursue the party on legal grounds in international forums and degrade the disproportionate power wielded by Hezbollah relative to other Lebanese political factions.