Who in the GCC wants a union?

Gulf Cooperation Council states consider transforming into a union to arm themselves against Iran’s increasing dominance and the growing instability in the Middle East. 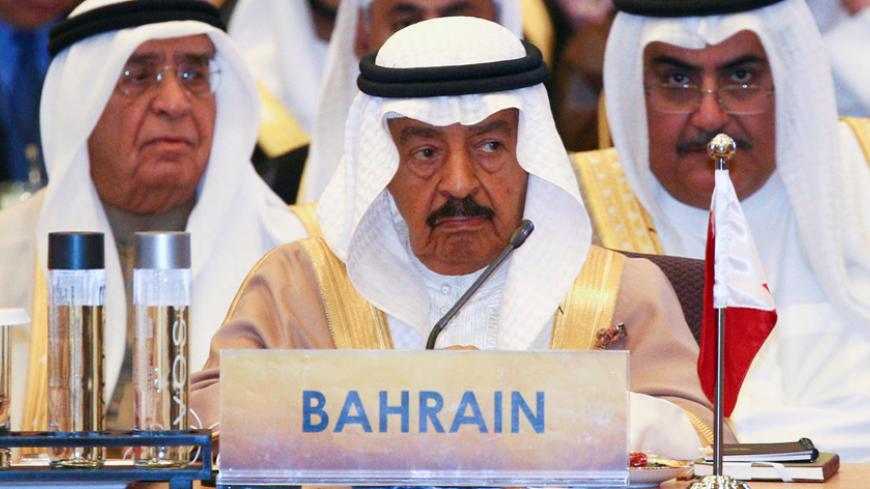 Citing “security problems, economic challenges and other serious issues confronted by the region,” Bahrain’s Prime Minister Prince Khalifa bin Salman Al Khalifa recently announced that the transformation of the Gulf Cooperation Council (GCC) to a union is an “inevitable goal” of this month’s Manama Dialogue (Dec. 9-11).

In 2013, Saudi Arabia and Bahrain called for a union at that year’s summit in Manama. Yet Oman’s Foreign Minister Yusuf bin Alawi bin Abdullah said that Muscat would not support such plans. Kuwait, Qatar and the United Arab Emirates (UAE) joined Oman in not backing Riyadh’s dream. With absolutely no illusions that Oman — historically the most independent member of the GCC — has changed its position, last month Ghanem al-Buainain, Bahrain’s minister of Parliament Affairs, stated that he sensed “great enthusiasm for the union from the other Gulf members.”

Yet is Buainain realistic in expecting Kuwait, Qatar and the UAE to support a union this month? Some skepticism is justified. Many non-Saudis in the GCC view Saudi Arabia as an important ally, yet they also see the oil-rich kingdom as an overbearing neighbor who does not always respect the smaller Arab Gulf states’ sovereignty. Due to a host of domestic issues in the GCC and regional developments, which the Arab Gulf families see through different lenses, Riyadh and Manama officials may see their plan for a union falling on deaf ears.

The argument that Saudi and Bahraini officials are making to their counterparts in the other Arab Gulf states is that the Middle East’s growing instability and exacerbated security crises have given all in the GCC reason to benefit from a more collective approach to fending off external threats. Yet to convince the Kuwaitis, Qataris and Emiratis that it is time for a union, these smaller monarchies’ rulers would need to calculate that compromising political liberalism, accepting less independence from Riyadh and giving up on plans to rival Saudi Arabia for regional influence are worth the benefits of tighter security cooperation.

Kuwait is the GCC state with the most vibrant political life and democratic institutions. Opposition to a union from Kuwait is largely attributable to concerns about “collective security actions” that Saudi Arabia and other Arab Gulf states could pursue to silence dissent and activism in Kuwait. Last month’s snap elections in Kuwait will bring in parliamentarians to the National Assembly from an opposition made up of liberals and Islamists whom other GCC states would not permit to hold any position of power in their own political systems. As many Kuwaitis take pride in their “half-democracy” and relative transparency and openness, the concept of a union has met its share of resistance in the country from voices across its political spectrum.

Qatar, the world’s top liquefied natural gas (LNG) exporter, has the highest gross domestic product per capita in the GCC (and the world). The likelihood of a union redistributing wealth from the wealthier Arab Gulf states to the GCC’s poorer areas is a key Qatari concern. Furthermore, over the years, Doha has established ties with Islamist factions throughout the region and hosted many Muslim Brotherhood members — often done so at the expense of healthy relations with other GCC states. If other Arab Gulf countries such as the UAE, which designate the Muslim Brotherhood a “terrorist” group, and Qatar belong to a union, what will be the future of Sheikh Yusuf al-Qaradawi and other prominent Islamist figures who live in Doha?

The UAE has also opposed plans for transforming the GCC into a union. Because Emiratis view themselves as a rival of Saudi Arabia for a dominant role in the region’s financial landscape, Abu Dhabi would not lend its support to a Riyadh-based Gulf central bank. In the UAE, where the authorities are waging a crackdown on Islamists, there has long been a belief that the Muslim Brotherhood operates in the Emirates on behalf of Saudi Arabia and Qatar for the purpose of undermining the UAE’s national sovereignty and independence.

The 800-pound gorilla is Iran. Oman’s interest in deepening ties with Iran in commercial, diplomatic, energy and security spheres is a major factor driving Omani opposition to a union, which would inevitably bear negative implications for the sultanate’s relationship with Tehran. For Kuwait and Qatar, which have relatively normal relations with Iran, their leaders have a different outlook on the Islamic Republic than Bahraini and Saudi officials. Given the Kuwaiti and Qatari royal families’ cordial relationship with their countries’ Shiites who are loyal to the Al Sabah (Kuwait) and Al Thani (Qatar) rulers, threats of an Iranian-inspired Shiite revolution or rebellion have not provoked substantial sectarian tension in Kuwait since the end of the first Gulf war, nor has it ever done so in Qatar at any point following Ayatollah Ruhollah Khomeini’s rise to power in 1979. This outlook fundamentally contrasts with Saudi Arabia’s and Bahrain’s outlook, which is based on an understanding of Iran being a predatory state committed to toppling the Al Sauds and Al Khalifas through a violent revolution. Manama and Riyadh’s shared view of the Islamic Republic as an existential threat has closely aligned the two kingdoms and led Bahrain to maintain its strong support for a de facto Saudi-led union.

To various extents, the smaller GCC members have taken stock of Iran’s rising influence in the Middle East and hedged their bets by maintaining their alliances with Riyadh and “good standing” in the council while also exploring a more normalized relationship with Tehran. Although none of these countries have gone as far as Oman in terms of looking to Iran as a seller of natural gas, the option of perhaps one day importing Iranian gas may receive greater consideration if they remain relatively independent from Saudi Arabia in the framework of a council (not union) and their economic ills increase their interest in importing more natural gas. Yet a union would erase any realistic Kuwaiti or Emirati plans for signing gas contracts with Iran.

Unquestionably, since 2013, new threats to GCC security have surfaced. The meteoric rise of the Islamic State, a more assertive Iran following the nuclear deal’s watershed passage and the war in Yemen have led more in the GCC to argue that if the Arab Gulf states become more unified, they could strengthen collective security. Furthermore, in light of Donald Trump’s win, there are grave concerns in the GCC about the US’ long-term commitment as the council’s security guarantor. Within this context, it seems likely that members of the GCC will seek stronger unity and cohesion in the face of regional threats and unknown variables surrounding the future of Washington’s foreign policy.

Yet the six GCC states’ different political landscapes, regional foreign policies and aspirations, a common concern about Saudi Arabia’s overbearing influence over the smaller Arab Gulf sheikhdoms and differing positions vis-a-vis Iran will undermine Riyadh and Manama’s vision of a union in the immediate future. Nevertheless, even if the Saudis and Bahrainis fail to garner support in Kuwait City, Doha and Abu Dhabi for transformation of the council into a union, the argument for doing so is likely to remain popular among certain Arab Gulf voices given the Middle East’s set of security crises and Iran’s ascendancy.