Is the GCC dead?

Although Saudi Arabia has invited Qatar to attend the Gulf Cooperation Council summit Dec. 9, a resolution to the dispute between Doha and its Gulf neighbors seems far off, threatening the entire council with irrelevancy. 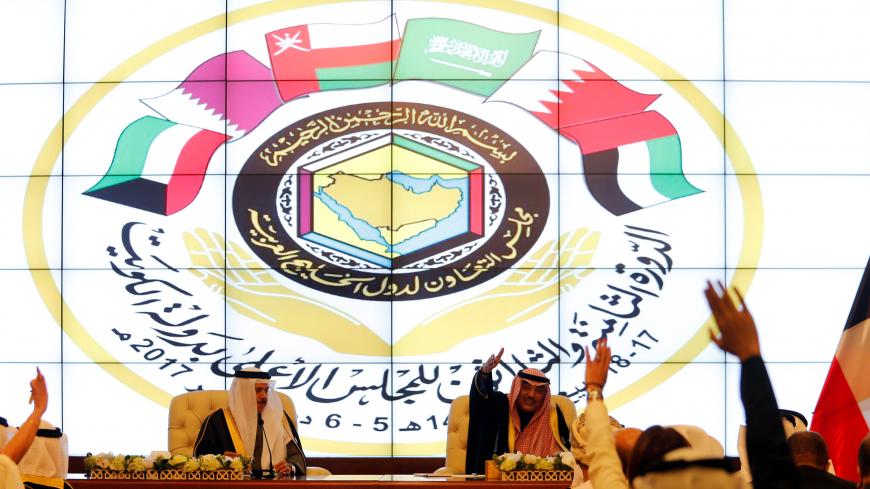 What can be expected from the annual Gulf Cooperation Council (GCC) summit being held on Dec. 9 in Saudi Arabia? Many are wondering if, or how, this month’s summit will differ from the last one held a year ago in Kuwait. Although difficult to predict how the upcoming meeting will unfold, recent statements from Arab Gulf states’ officials indicate that neither side has the will to make major concessions, at least in the foreseeable future. To the contrary, the attitudes expressed by both sides suggest that the GCC crisis could last for a long time.

Earlier this month, shortly after Qatar announced its decision to exit OPEC effective Jan. 1, 2019, Bahrain’s Foreign Minister Sheikh Khalid bin Ahmed Al Khalifa called the Qatar crisis “unprecedented and very deep.” He accused Doha of eliminating any hope of Qatar returning to the Saudi/Emirati-led bloc’s fold. Regarding the summit, he said the “dispute can’t be solved by just a hug. There must be a new agreement and new regime, and Doha should be placed under scrutiny.” Despite Saudi Arabia’s King Salman bin Abdul-Aziz Al Saud inviting the emir of Qatar to the summit earlier this month, Manama’s chief diplomat affirmed that Qatar had burned its bridges with the GCC’s blockading states and Doha sending Sheikh Tamim bin Hamad Al Thani or a low-level representative would make no difference.

None of this bodes well for pushing the Arab Gulf states toward reconciliation. As the GCC is unquestionably at its most dysfunctional stage since the sub-regional institution’s founding in 1981, it is difficult to imagine the summit resulting in the Arab Gulf monarchies resolving their 18-month-old dispute. But even if the parties fail to overcome their differences and the meeting does not result in the blockade being lifted along with diplomatic relations being restored, there is still no reason to conclude that such a "failed" summit would necessarily mark the GCC’s death knell.

Changes in leadership and regional circumstances could, at least at some point, restore the GCC’s relevance, which the institution had from 1981 to 2017. Perhaps one reason Qatar has thus far chosen to stay in the GCC despite the crisis pertains to hopes that the leadership in Riyadh and Abu Dhabi might not be in power as long as many expect. Given that the dispute is highly personalized, Crown Prince Mohammed bin Salman or Crown Prince of Abu Dhabi Mohammed bin Zayed Al Nayhan losing power — even if not any time soon — is a scenario that could possibly make a Qatari-Saudi or a Qatari-Emirati rapprochement possible. Yet with both crown princes remaining at the helm of Riyadh's and Abu Dhabi’s foreign policy agendas, it would be difficult to imagine the emir of Qatar making overtures to either leader given that they sought his overthrow in 2017 and sieged his country despite Qatar being a founding GCC member and ally in the Yemen war.

Regional crises such as Iran’s 1979 Islamic Revolution, the Iraqi invasion of Kuwait in 1990 and the rise of the Islamic State (IS) in 2014 all served to bring the six GCC states together, albeit to various extents and with many complications. Indeed, some scholars of the Gulf region have posited that the first GCC crisis (March-November 2014) came to an end in no small part due to deep fears in the Arab Gulf monarchies about IS’ meteoric rise to power in the Levant, which posed an undeniable threat to the northern Gulf at a time when the Qatari, Saudi, Emirati and Bahraini leaders agreed that for all of their differences, Arab Gulf unity needed to be a top priority. Today’s ongoing GCC crisis, however, has possibly been a partial outcome of the Gulf states feeling far less threatened by IS’ remnants and more interested in focusing on political differences within the Gulf region.

Given all the variables in play, it is safe to bet on a continuation of this impasse in the Gulf dispute. But that does not necessarily sound the GCC’s death knell. The GCC will continue to function as a sub-regional institution, but it may be a long time — if ever — until the council functions as effectively as it did during the GCC’s first 36 years of existence. Put simply, the issues that triggered the ongoing Gulf crisis are ones that are unlikely to be resolved at the summit in any manner that can help to restore the trust, unity and political fabric that previously shaped the GCC. Realistically, the best outcome of this summit would be a productive dialogue that lasts longer than last year’s summit in Kuwait, and one that can potentially help establish ground for restoring trust, which is a timely process.

While the GCC’s long-term future may present different options for the GCC members, the council is set to remain a toothless institution for the foreseeable future, much like the Arab League. As Saudi and Emirati leaders have stressed, resolving the crisis is a low priority and Qatar is still guilty of its alleged links with “terrorist” organizations from their perspective. Likewise, Emir Tamim has also emphasized that while he’d like to have relations restored with the blockading countries, such an outcome is not worth Qatar’s autonomy, independence and sovereignty. As underscored by Doha’s decision to exit OPEC and the growing post-blockade relations that Qatar has fostered with Iran, Turkey, India, China, Russia and Western powers (not least the United States), the Qataris are charting a future course on the international stage in which they are not allied with Saudi Arabia, Bahrain and the Emirates. In fact, Qatar’s recent military buildup is highly illustrative of the extent to which Doha still perceives a threat from the blockading states.

Regardless of how affairs unfold in the Gulf in the future, it is highly possible that the six GCC members could continue to meet each year and maintain technocratic ties that are most pragmatic without having a deep sense of trust in one another. This would, of course, not leave the GCC as a dead institution. Instead, under such circumstances, it would likely be most accurate to describe the GCC as a dormant institution.