Is the GCC dead?

The Gulf Cooperation Council is broken and may not be fixable. 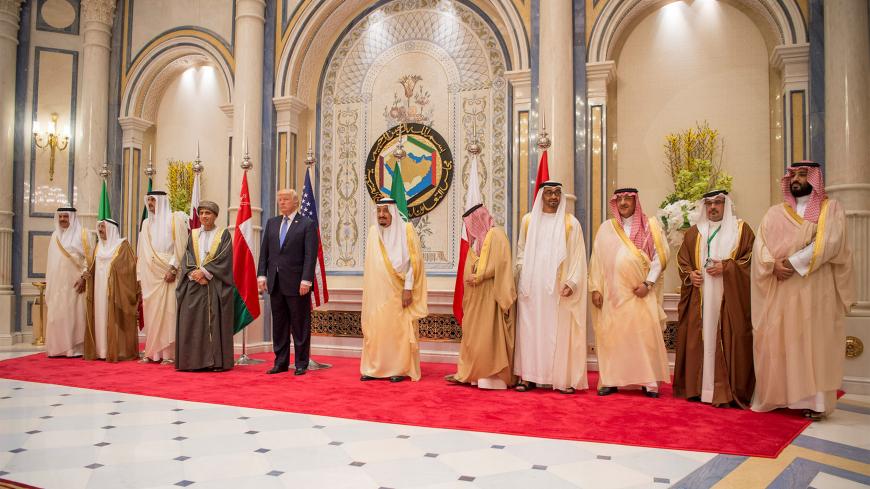 US President Donald Trump (5-L) prepares for a group photo with Saudi Arabia's King Salman bin Abdul-Aziz Al Saud (center, next to Trump) and other heads of state at the Gulf Cooperation Council summit in Riyadh, Saudi Arabia, May 21, 2017. At far right is Mohammed bin Salman, who became Saudi Arabia's crown prince the next month. - Bandar Algaloud/Saudi Royal Court/REUTERS

A year after the start of the Saudi-led siege of Qatar, the Gulf Cooperation Council is all but dead. The GCC was created by Saudi King Khalid in May 1981 during the Iran-Iraq War to provide strength through unity for the gulf monarchies; the United States was its midwife. Never a tight union, the GCC nonetheless was a useful means to coordinate policy and enhance the influence of Saudi Arabia and the other five monarchies.

The decision announced on June 5, 2017, by Saudi Arabia, Bahrain, the United Arab Emirates and Egypt to break relations with Qatar and impose a blockade on trade on the emirate came shortly after President Donald Trump’s visit to Riyadh last year, his first foreign stop as president. It remains unclear today how much the Saudis told the Americans about the plan to attack Qatar and how much Trump’s team understood what they were told. Confusion was the hallmark of the American response to the blockade. It still is.

The Saudis did tip their hand in one way. On May 28, 2017, the 200 surviving male descendants of Muhammad Ibn Abd al Wahhab, the founder of the Islamic sect named for him, published an open letter in the Saudi newspaper Okaz. The front-page letter was addressed to the emir of an unnamed Gulf state. It accused him of failing to follow the truth path of Wahhab and of deviant behavior and demanded that the name of the chief mosque in his emirate be changed from its current name, the Muhammad Ibn Abd al Wahhab Mosque. Only one Gulf state has such a mosque, Qatar, the only other Wahhabi country in the world.

It was in effect the excommunication of Emir Tamim bin Hamad Al Thani from the faithful. This religious expulsion preceded the political breakup by a week. It is always far more difficult to resolve a matter of faith and religion than a political dispute. Politics are malleable, religion is doctrine.

This spring, one of the descendants of Wahhab, Abdullatif bin Abdulaziz bin Abdulrahman Al Sheikh, became Saudi minister of Islamic affairs. The ministry determines the content of prayers in the kingdom’s mosques, a crucial position in the Wahhabi clerical establishment. Abdullatif is a protege and ally of Saudi Crown Prince Mohammed bin Salman.

The crown prince is the architect of the Qatar blockade and likely the key driver behind the letter. Political quarrels between the Saudis and Qataris go back decades. Riyadh has long resented Doha’s determination to have an independent foreign policy and its tendency to stick its finger in the Saudi eye. Ambassadors were withdrawn but the spats were kept contained. The quarrels did not affect the GCC from doing its business and holding high-level meetings.

Tensions are inherent in the council given the power disparity between the members. The Saudis are the elephant. They always envisioned the GCC to be more like the Warsaw Pact than NATO: an alliance run by one capital rather than a collection of equals. The smaller gulf states knew this and resisted moves for greater unity in military affairs or a single currency because they feared Saudi dominance would be inevitable. Cooperation and consultation but not integration.

Prince Mohammed has broken the old way of doing things and thus the GCC. Instead there are now a variety of camps in the monarchies. There is the Saudi camp. The UAE is firmly on board with punishing its political and economical rival Qatar. Abu Dhabi is a strong critic of Al Jazeera, which is based in Doha. Bahrain is an even more zealous member because it has longstanding border disputes with Qatar, some of which are being reopened now. A majority-Shiite state with a minority-Sunni ruling family, Bahrain is dependent on Saudi military forces, which entered the country in the 2011 Arab Spring, for its stability.

Kuwait is a partial member of this bloc. It did not break relations with Qatar last year and has quietly tried to mediate the dispute, sometimes with America’s support. But Kuwait is very dependent on Saudi Arabia, especially since the 1990 Iraqi invasion. It follows the Saudi lead on almost all issues given its deep fears of Iraqi irredentism and Iranian interference with its large Shiite population. The Kuwaitis followed the Saudis in committing to a five-year economic aid package for Jordan at the recent Mecca summit convened by King Salman bin Abdul-Aziz Al Saud to bolster the position of the other Arab monarch in the Middle East.

Qatar is on its own. Since it hosts the largest and by far most important American military base in the region, the headquarters of Central Command, Qatar has a unique relationship with Washington. It lobbies for its interests in the United States very aggressively.

The blockade has produced an interesting backlash in the tiny country. By all accounts the Qatari citizens (a minority of Qatar's residents, who are overwhelmingly foreign workers) have rallied behind the emir. A Qatari nationalism has emerged far more vibrant than before.

Oman stands aloof from the quarrels of its fellow monarchs. Sultan Qaboos has always been a distant figure, rarely attending GCC summits. His sultanate looks to South Asia as much as it looks to the Middle East. Muscat refused to join the Saudi-led war in Yemen three years ago when the rest of the GCC signed up for the Saudi coalition against the Houthis. Oman maintains correct ties with Iran and has helped Qatar cope with the blockade.

So the GCC is today broken as never before. The Trump administration has failed to speak with a clear single voice. More importantly, it has been ignored. Two secretaries of state have tried to heal the split as has the secretary of defense, to no avail. It is an extraordinary display of American weakness and impotence.

It also means that the united Islamic front against Iran that Trump hailed last year in Riyadh is broken at its front line in the Persian Gulf. With the American violation of the Joint Comprehensive Plan of Action and the isolation of the United States from the P5+1 on the nuclear deal, the unity needed to curb Iran is fragmented both regionally and globally.

The GCC secretariat still exists in Riyadh. Inter-Arab cold wars are never permanent. But alliances are built on trust. NATO survived George W. Bush’s stupid war in Iraq because of an underlying trust in America. As NATO special adviser at the time, I know, I was there. There is no longer that fundamental trust in America. The GCC was an important American ally now lost to petty intrigue.