After an Arab League summit including delegates from the Palestinian Authority produced a statement denouncing Hezbollah as a terrorist entity, Hamas and other Palestinian groups responded with defiance. 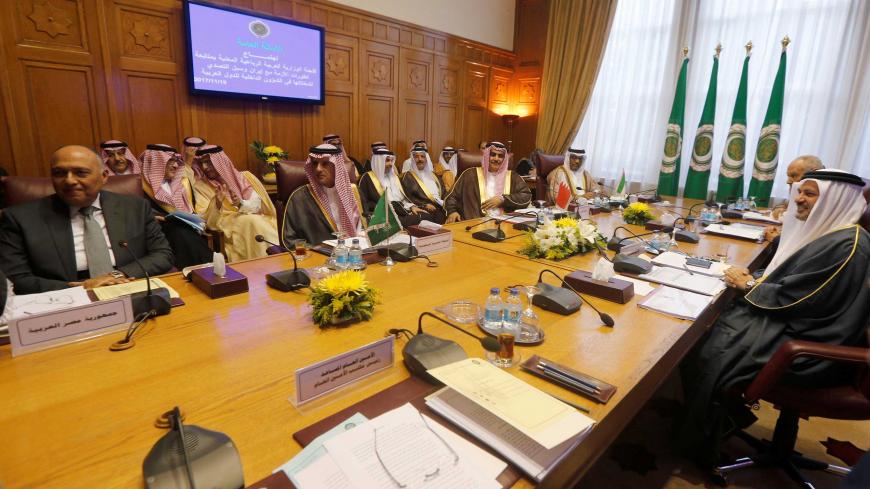 During their meeting at the Arab League in Cairo Nov. 19, Arab foreign ministers accused Lebanese Hezbollah of supporting terrorism through advanced weapons and ballistic missiles and of controlling Lebanon, since the movement is Iran’s biggest military arm in the region.

In a statement, Hamas rejected the labeling of Hezbollah as a terrorist group. The movement expressed surprise that the Arab statement did not mention the “Israeli terrorism” the Palestinian people suffer on a daily basis.

In its statement, Islamic Jihad condemned the Arab announcement, calling it a cover to fuel strife and conflicts in the region. The group believes the move serves what it deemed the “Zionist enemy.”

For its part, the Popular Front for the Liberation of Palestine (PFLP) said the Arab statement was hostile and represents the Saudi dominance over the policies of the Arab League. Meanwhile, the Democratic Front for the Liberation of Palestine stated that accusing Hezbollah of terrorism serves the US administration’s interests and desire to normalize relations between Israel and the Arab states.

Sari Orabi, a Palestinian political analyst who writes for several Arab papers and news sites, told Al-Monitor, “Hamas’ opposition to the Arab announcement against Hezbollah stems from its own fears. Several motives pushed Hamas to take this position: first, its need for major support that left the movement incapacitated. It lacks allies and supporters, while some of its friends, like Qatar, are suffering a boycott.”

Orabi went on, “The second motive is that Hamas may also be accused of terrorism after Hezbollah. Third, the Arab announcement coincides with Saudi efforts to normalize relations with Israel and settle the Palestinian cause, while the kingdom considers Iran to be the real threat to the Arab nation.”

Hamas leaders rushed to show solidarity with Hezbollah. Mousa Abu Marzouk, a member of Hamas’ political bureau, tweeted Nov. 19 that Hezbollah is not a terrorist organization, warning that all Palestinian resistance factions might face the same fate.

On the same day, Saudi and other Gulf Twitter users launched a wave of criticism against Abu Marzouk, accusing Hezbollah of committing crimes in Syria and Lebanon. They described the movement as a sectarian terrorist organization, calling on Hamas to distance itself from Hezbollah.

Salah Bardawil, another member of Hamas’ political bureau, said Nov. 24 that the movement does not deny its military relations with Hezbollah, but refused to reveal more details. He added that Hamas fears its turn will come.

Hamas' representative in Lebanon Ali Baraka told Al-Monitor, “Hamas rejects the terrorist accusation leveled against Hezbollah, as such a move serves the Zionist enemy. Our relations with Hezbollah are based on responding to Israeli aggression. We were both able to unify our vision regarding the Palestinian cause.”

He added, “Hamas’ relations with Iran are more than excellent and strategic today as Iran supports the Palestinian people in the face of the Israeli enemy and backs the resistance. Hamas stands by Lebanon as a state, army, people and resistance. If Israel attacks Lebanon, the battle will be [our own]. We cannot accept Lebanon or the resistance being singled out.”

Member of the PFLP’s political bureau Kayed al-Ghoul told Al-Monitor, “Describing Hezbollah as a terrorist [group] goes in line with the US administration’s and the Israeli occupation’s attempts to demonize the resistance forces that champion its people’s causes and liberates their lands. This announcement is a disgrace to official Arab policies, which should have instead supported the resistance forces.”

Despite the Palestinian condemnation, Fatah has remained silent. The Palestinian Authority was present at the Arab League meeting in Cairo and approved of the statement.

A Palestinian official close to President Mahmoud Abbas told Al-Monitor on condition of anonymity, “The Palestinian leadership stands by the brotherly Arab states in their position against foreign interference in their internal affairs. Although Palestinians do not want to be involved in regional disputes, the Palestinian scene has suffered from Iranian interference.”

On Nov. 20, Hezbollah Secretary-General Hassan Nasrallah condemned the Arab statement, while recognizing that his movement sent Kornet missiles to Gaza. The Coordinator of Government Activities in the Territories said on the same day that Hamas' determination to stand by Iran and its allies in any future battle between Israel and the Shiite axis will only hurt Palestinians.

Lebanese political writer Kassem Kassir, who writes for several Lebanese outlets and is close to Hezbollah, told Al-Monitor, “Hamas’ relationship with Hezbollah has recently seen positive developments. In the past weeks, the two parties held meetings to discuss new areas of cooperation as they have reached a common vision on the regional developments. Hamas and Hezbollah believe that accusing one of terrorism means accusing the other, a concept that all Palestinian factions except the PA agree on. The two are facing numerous challenges posed by Israel and the US, and their cooperation might reach the point of unifying their military fronts in case an Israeli war targets any of them.”

On Nov. 26, Hamas leader Sami Abu Zuhri denied a report by the Saudi Okaz newspaper that Hezbollah is opening bank accounts for Hamas leaders in Algeria. Hamas believes such news to be part of an organized campaign by Arab leaders close to Israel to incite against the resistance, normalize ties with Israel and settle the Palestinian cause.

The Arab League announcement against Hezbollah and the support of Palestinians for the movement might lead to new political and regional axes, with Hezbollah and Hamas in their center. It could take us back to the pre-Arab Spring era, when the axis of resistance was led by Iran against the Saudi-led axis of moderation. But such a situation could diminish the Palestinian cause to a tool of polarization used by the competing leaders in the region.