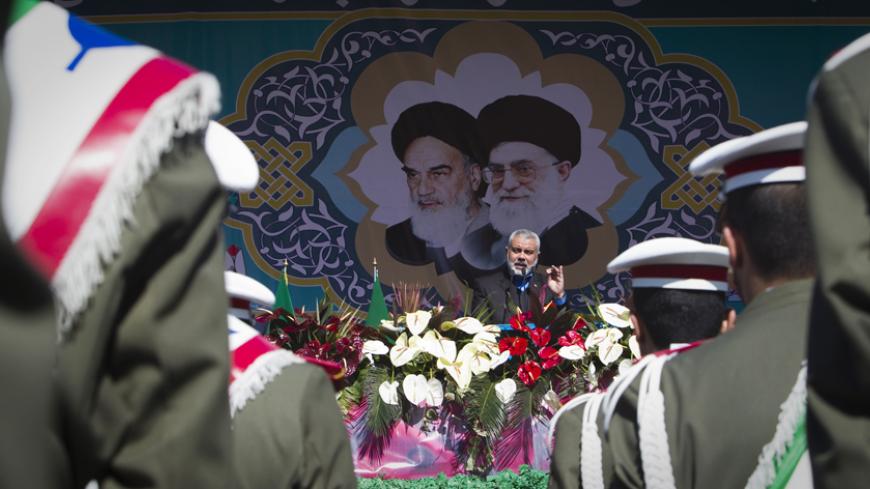 During a celebration to mark Hamas’ inauguration, which was held in the Gaza Strip on Dec. 14, Abu Obeida, a spokesman for Izz ad-Din al-Qassam Brigades, expressed his thanks to Iran for supporting Hamas with money and weapons and providing it with rockets and anti-tank missiles.

Before Hamas expressed its thanks to Iran, a high-level visit to Tehran was made by a Hamas delegation on Dec. 8. The visit was headed by Hamas political bureau member Mohammed Nasr, head of its international affairs, Osama Hamdan, Maher Obeid, Jamal Issa and Hamas representative in Tehran Khalid al-Qaddumi. The delegation met with Iranian parliament Speaker Ali Larijani in an attempt to restore Iran’s military and financial support for the movement.

On Dec. 15, Hamdan described the visit as fruitful and that the relationship between both sides was better than many could imagine and that the visit was made to promote the 24-year-old ties.

Nasr, the head of the delegation, told Al-Monitor, “Hamas is keen to promote ties with Iran, to overcome the sensitive and critical circumstances in the region to serve the Palestinian cause.”

This prompted, on Dec. 8, Iranian circles to consider the visit as a new page between the two parties, as it has settled most differences between Hamas and Iran.

Qaddumi told Al-Monitor, “The visit is positive and the meetings with the Iranians were warm. Hamas is concerned with Iran’s role as a pivotal country in the region with a long history of supporting the resistance. Hamas does not have to reveal the mechanism and details of the support it receives from any party, or the nature of ties it has with the parties it deals with.”

A senior Hamas official abroad, who spoke on condition of anonymity, told Al-Monitor, “Hamas is aware that Iran is under a harsh economic blockade and its financial expenses are enormous in neighboring countries. We may not have great hopes that financial support will be generous as it was before, but the military support for the movement may not be harmed much, which is sufficient for us at this stage.”

Ahmed Youssef, a senior political adviser to former Hamas Prime Minister Ismail Haniyeh, told Al-Monitor, “Hamas seeks to improve its relationship with Iran in light of the imposed siege and isolation. These require that the movement breaks through its isolation and siege and be present in the regional political scene, through its reconciliation with Iran.”

A former Iranian member of parliament, who spoke on condition of anonymity, told Al-Monitor, “Hamas’ visit to Iran at such a high level, and the al-Qassam Brigades expressing its thanks to Tehran publicly in front of millions of people are certainly not for free, but rather in exchange for a price that Hamas has received from Iran.”

In a telephone interview from Tehran, he added, “The remaining question, to which no one has an answer except for Hamas and Iran, is whether Hamas’ visit and thanks to Tehran was preceded by the transfer of financial aid or was it an Iranian condition to resume support?” The member of parliament expected that a few weeks will pass before the question was answered.

Remarkably, reactions were raised within the movement in support and rejection of the Hamas-Iranian rapprochement on social networking sites. There were also heated arguments between Hamas supporters as some accuse Tehran of killing Syrians and Iraqis. However, they all expressed their need to return to Iran, in the hope that financial aid and military support would be resumed.

What is interesting regarding the Hamas-Iranian rapprochement is that it coincides with the harsh attack Syrian President Bashar al-Assad launched against the movement on Dec. 15. He accused it of involvement in the Syrian war and bias in favor of the Muslim Brotherhood at the expense of Syria.

This was denied by Sami Abu Zuhri, a spokesman for Hamas. He told Al-Monitor, “The movement did not interfere in Syrian affairs and left the country so as not to be considered in favor of one party at the expense of another. The quotes attributed to Assad are not true, although Hamas did benefit from its presence in Syria.”

On Dec. 11, Raafat Marra, a political official within Hamas, confirmed that Hamas’ visit to Iran does not mean that its policy has changed, its positions regarding issues in the region have changed or that it made a mistake and apologized for a position, in reference to the position regarding Syria.

However, a local news agency in Gaza that is close to Hamas reported on Dec. 15 that there were calls between the Saudi intelligence and Hamas leadership in which Riyadh expressed its outrage at the rapprochement with Tehran. The Saudis reportedly called on Hamas to halt its communication with Iran in exchange for exerting greater pressure to lift the siege on Gaza. The report added that Hamas received the Saudi demand without replying to it, but they promised to consider it.

A prominent Hamas leader, who spoke on condition of anonymity, denied the report. He told Al-Monitor, “There was no contact between Saudi Arabia and the movement, what has been circulated about the dissatisfaction of one of the region’s state with the rapprochement between Hamas and Iran is inaccurate.”

The visit of the Hamas delegation to Iran is a prelude to the visit of Hamas head of political bureau Khaled Meshaal, which is long overdue.

Qaddumi told Al-Monitor, “Iran does not oppose the visit, but the preparations need to be completed. When that is ready, Meshaal will meet with senior Iranian officials, most notably Ayatollah [Ali] Khamenei, the supreme leader of the Islamic Revolution, and President Hassan Rouhani.”

In his Dec. 15 interview with Al-Monitor, Meshaal contented himself with saying, “My own visit to Iran will happen in due time, once preparations are completed. There is no rupture of relations between Hamas and Iran. Our shared history is long. Its support to us has extended over many years.”

Hamdan did not deny on Dec. 15 the news regarding a pending visit by Meshaal’s to Tehran. Yet, he stressed that Hamas would not announce its date for security considerations in the first place and, when the visit takes place, it will be announced as usual.

It is clear that there is a new page in the Hamas-Iranian ties, which may be different from the previous attempts to restore them. But there are significant obstacles for Hamas, namely that regional powers that are not on good terms with Iran might become hostile to Hamas as a result of the rapprochement. However, the question remains: Will Hamas reap the profits coming from this visit without having to pay a costly price?