Reports that Iran is insisting on the resignation of Hamas’ political bureau chief Khaled Meshaal in exchange for the resumption of relations between the parties seems to have stalled reconciliation talks for now. 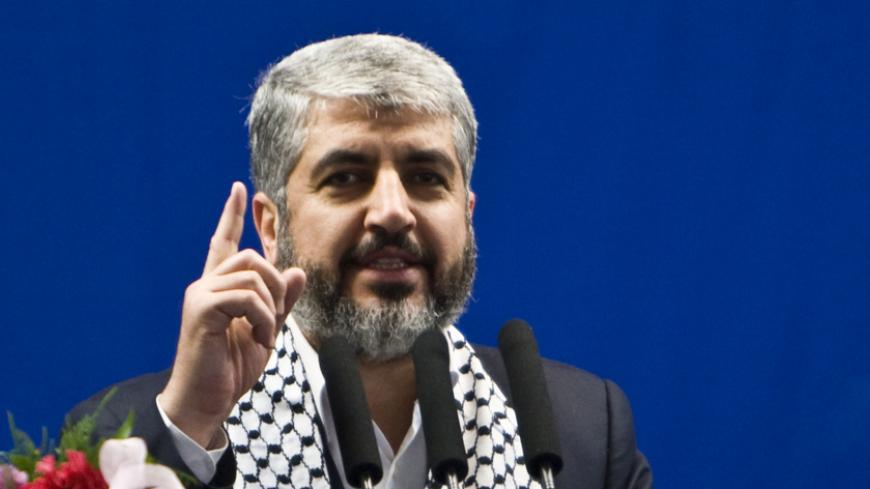 As Hamas’ talks on a rapprochement with Iran reached their peak and in light of the preparations for its political chief Khaled Meshaal to visit Tehran, Hamas-Iranian ties have suffered a sudden setback when media outlets with ties to Hezbollah and Iran published reports that contributed to a “temporary disturbance.”

A Lebanese newspaper close to Hezbollah reported Feb. 7 that the agenda of Meshaal's visit to Tehran was obstructing the renewal of ties with Hamas because of his insistence on meeting with Iran's Supreme Leader Ayatollah Ali Khamenei and President Hassan Rouhani.

The same day, Hamas spokesman Sami Abu Zuhri said that the information in the report had been fabricated and called for an end to reports that tarnish the image of Hamas.

Leaked information was then published in Tehran on Iran's conditions for the restoration of ties with Hamas, including Meshaal’s resignation and for Hamas not to impose any conditions regarding the way Meshaal will be received in Tehran.

Because these Iranian reports were published by an Islamic Revolutionary Guard Corps-affiliated website managed by Mohsen Rezaei, a former commander of the corps and adviser to Ayatollah Khamenei, they are taken to express Tehran’s official policy.

Contrary to what Iran and its allies' intentions by targeting Meshaal, a number of Hamas leaders confirmed that the movement supports Meshaal and rejects overstepping him in a bid to restore ties with Tehran. Hamas did not engage in media debates, fearing that relations with Iran could further deteriorate.

Doha-based Hamas spokesman Hossam Badran told Al-Monitor, “For anyone desiring to establish ties with Hamas, the main key is its political office, headed by Meshaal.”

Mohammed Madhoun, the former Hamas minister of youth and sports in Gaza, wrote in a Feb. 9 Facebook post that the Iranian attack against Meshaal is taking matters to the point of no return.

The debate over the Iranian attack against Meshaal raged on social media networks, with contradictory reactions by supporters of both sides. Hamas cadres expressed their annoyance at what they viewed as an unprecedented Iranian interference in the movement’s internal affairs and an unacceptable prejudice against Meshaal as a person, even if they disagree with him on some issues.

The Izz ad-Din al-Qassam Brigades, Hamas' military wing, has remained silent in the recent media discussion between Hamas and Iran regarding the campaign against Meshaal.

A Hamas military official who spoke to Al-Monitor on condition of anonymity said, “The al-Qassam Brigades might be the biggest beneficiary from renewed ties with Tehran, given its need for military support. Yet, we will not receive a single bullet [in military assistance] from any party unless there is full consent from Hamas’ political leadership, headed by Meshaal.”

He added, “The al-Qassam Brigades is a Hamas wing and not the entire movement. Therefore, it is committed to the decisions of the regulatory institutions, and we will be supportive of any rapprochement with Iran to the advantage of the resistance. Yet, our commitment to the cohesion of the movement and organizational structure, as well as the symbolism of the leadership, will not be subject to bargaining.”

Iran's first official comment on the tension with Hamas came from Hussein Sheikh al-Islam, an adviser to parliament speaker Ali Larijani. He said that the arrangements for Meshaal's visit to Tehran were an Iranian responsibility, and that it is not up to Meshaal to set the rules for his reception, in a reference to his meeting with Khamenei and Rouhani.

Speaking to Al-Monitor on condition of anonymity, Hamas sources denied the Iranian talk of a dispute with Hamas regarding the agenda of Meshaal's visit to Tehran and whether he will meet with Khamenei and Rouhani. They said, “The main reason behind the obstructed visit has nothing to do with protocol procedures. Rather, it is political and related to Iran’s desire to learn Meshaal's position on the issue of Syria.”

They added, “Iran clearly wants Meshaal's long-awaited visit to result in Hamas retracting its previous position, which may reach the point of declared support for Syrian President Bashar al-Assad. This is hard to achieve in light of the bloodshed across Syria.”

This was confirmed by Mushir al-Masri, spokesman for Hamas' parliamentary bloc. He told Al-Monitor, “Recently, tepidness has prevailed over the Hamas-Iranian ties, which has affected Hamas' position toward the Syrian revolution.”

Despite the campaign targeting Meshaal, Hamas does not seem willing to cause a rupture with Iran. On Feb. 7, a Hamas delegation consisting of Jamal Issa, Ali Baraka and Khalid Qaddoumi arrived in Tehran. They met with Iranian Deputy Foreign Minister Hossein-Amir Abdollahian, who said that Iran's relationship with Hamas is good and solid, while ignoring the talk about Meshaal.

Speaking to Al-Monitor, Osama Hamdan, head of the Hamas Foreign Liaisons, said Hamas is committed to a balanced and positive relationship with Iran. However, he also said there are parties — which he did not identify — that seek to obstruct this relationship by causing a disturbance. He added that there are communication channels with Tehran.

A Palestinian official in Lebanon who previously served as mediator between Hamas and Iran told Al-Monitor over the phone on condition of anonymity, “The campaign targeting Meshaal clearly confirms that an influential current in Iran and within Hezbollah does not want a renewal of ties with Hamas, given the lack of internal consensus in Beirut and Tehran, to please the Syrian ally in Damascus who opposes any rapprochement with Hamas.”

Finally, the internal debate within Hamas in the Gaza Strip, Beirut and Doha — where the movement’s decision-makers are based — confirms that between preserving the cohesion of Hamas, headed by Meshaal, or renewing its alliance with regional powers, including Iran, Hamas would rather take the first option while desiring not to give up its foreign ties. Yet, it clearly means that Meshaal's visit to Tehran will be postponed until further notice, so as not to cause a rupture between the parties.