The Independent High Electoral Commission has prohibited PMU factions from participating in elections, although they might be able to participate through the political parties they are affiliated with. 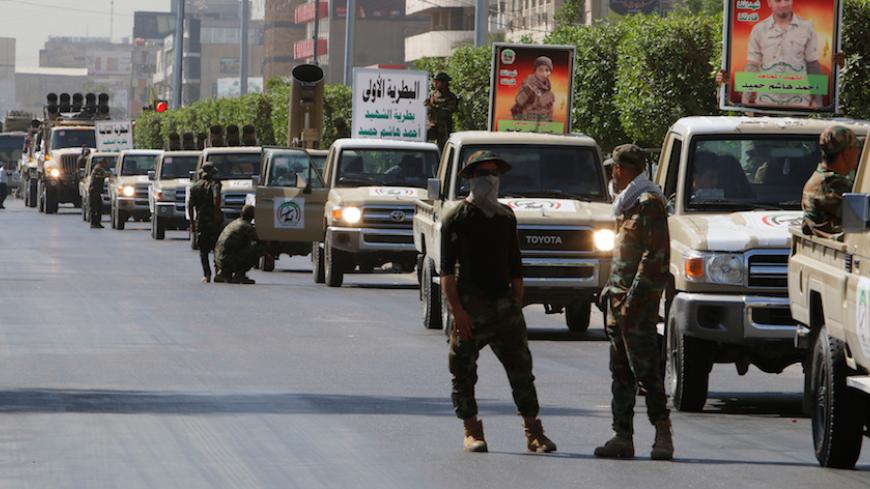 Vehicles of the Popular Mobilization Units take part in a military parade in the streets of Baghdad, July 12, 2016. - REUTERS/Khalid al Mousily

BAGHDAD — The possible participation of armed factions under the Popular Mobilization Forces (PMU) in the local elections that are scheduled to take place in April 2017 and the parliamentary elections in 2018 has sparked huge controversy in Iraq. As a result, Iraq's Independent High Electoral Commission announced Aug. 28 that it would not include any political entity registered under the PMU in the elections, as the latter is a military organization that is connected to the security apparatus, affiliated with the state and obeys the commander in chief of the armed forces.

Most armed factions have not hidden their intention to participate in the electoral race and for their members to join parliament and even take part in forming the Iraqi government. Some of these factions think their battle against the Islamic State (IS), the blood their members have shed in that fight and their defense of the country must be rewarded with political representation.

The escalated tone about the PMU’s participation in the local and parliamentary elections has stirred the concerns of well-established political parties in the government. As a result of the massive publicity surrounding the PMU, some of its factions such as the Badr Organization, Hezbollah Brigades and others found themselves receiving greater amounts of support from Iraqis after being depicted as the only forces that managed to expel IS from regions under its control in June 2014.

On Aug. 27, Muqtada al-Sadr, the leader of the Sadrist movement, best described the participation of the PMU in politics and in the elections. He said that throwing Shiite faction fighters combating IS onto the political scene is “suicide for the political process” in Iraq. Sadr’s statement was an answer to the question of one of his followers about the electoral committee’s registration of entities that include PMU factions. He said, “Such nominations will mix jihad in politics and will tarnish the reputation of jihad and jihadis and turn the government into a military or militia one.” He added, “Involving jihadis who lack political expertise will be suicidal for the political process.”

After Sadr voiced his objection to PMU factions’ participation in the elections, the electoral commission announced Aug. 28, “The PMU is a military organization with security ties to the security apparatus and the law of political parties forbids the registration of any political entity that takes the form of military or semi-military organizations. According to Article 8.3 of the Law of Political Parties, there should be no links to any military force.”

The Law of Political Parties that the Iraqi parliament approved Aug. 27 states, “The formation of a party or political organization and their work must not be similar to military or semi-military work and the party must not be affiliated with any armed force.”

In its report, the electoral commission talked about the PMU because the PMU is a state organization, but did not mention the armed factions under the PMU and whether they circumvented the law and registered as political entities. Also, the electoral commission is silent about factions affiliated with political parties and members of parliament, such as the Badr Organization or Asa’ib Ahl al-Haq.

Al-Monitor tried to get answers to these questions from electoral commission officials, but they refused to make any statements to the media. Nevertheless, a member of a PMU committee, Karim al-Nuri, told Al-Monitor, “The parties that have PMU factions will participate in the elections, and they have the right to do so.”

Nuri justified these parties having armed factions, which theoretically could prevent them from participating in elections, by saying, “The parties have volunteers in the PMU, and they have worked under PMU command.” He added, “The war against IS that threatened the Iraqi people forced the parties to encourage their members to form armed factions.”

Iraqi officials are trying to portray the PMU as an organization that takes orders from the commander in chief of the armed forces, Prime Minister Haider al-Abadi, but this is not necessarily the case. Many factions have reiterated that they only answer to their leaders, which makes political and military control over them impossible.

Although Sadr’s concerns about the government becoming “a military or militia one” in case the armed factions rise to power are realistic and justified, they contradict the actions of Sadr and other political leaders. Sadr, for example, has organized armed factions affiliated with him, integrated them into the security forces and won them over politically. Sadr spearheads Saraya al-Salam, which is an armed faction, and he is not any different from the remaining parties that circumvent the law to keep their armed factions and stay in the electoral race to try to attain or maintain political power.

Although it will be hard for PMU factions to have a clear path to participate in the elections, they can make it into the race through the backdoor — that is, through the political parties they are affiliated with.